Giving Credit Where It's Due

“This Book of the Law shall not depart from your mouth, but you shall meditate in it day and night, that you may observe to do according to all that is written in it. For then you will make your way prosperous, and then you will have good success.” ~ Joshua 1:8 (NKJV)

The man who’s determined to make his world better
Who’s willing to learn and to lead
The man who keeps trying and doing his best
Is the man who knows how to succeed.

For the past several weeks the primary focus of my column has been the hurricane and the impact it had on our son’s family. My sister Connie predicted that I would make a four-part series out of it – and she was pretty close to being right. She also commented on how I never seem to have any shortage of material for my column as the day-to-day events of our life provide more than enough!

This week I’d like to shift my focus to a more joyful event that happened while we were “weathering the storm.” On September 1st, when Keen and Kirk were still down in Texas, I received a call from one of Keen’s law school colleagues who wanted to let us know that the results of the bar exam had been released. She also wanted to report the good news that she had passed.

After I hung up the phone, my stomach started doing flip-flops, my hands started shaking and my knees started knocking. So I called Keen on his cell phone and spoke slowly and clearly so he could understand me. “The bar results are out,” I said. “What?” he asked. I repeated: “The bar results are out.” Well, I guess my voice sounded so serious that he thought the news was bad. Dejected, he asked, “Did I fail?” “Oh, no, honey!” I quickly replied. “I have no idea. I’m just calling to tell you that the results were released. We need that yellow card to look it up on the internet.” One problem. Keen couldn’t remember what he did with the all-important yellow card which contained his all-important confidential examinee number. Now I was really getting nervous.

“W-h-a-a-a-a-t do you mean you don’t know where the yellow card is?” I asked, my voice quivering. After wracking his brain for several minutes, Keen asked if by chance I had saved any mementos from his bar exam. (He knows I’m a sentimental packrat when it comes to things like that.) Suddenly a light bulb went off in my head and I remembered that I had saved the papers he brought home from the test!

After locating the yellow card with his exam number, I set out to look up the information on the web page. With shaky fingers, I typed in www.kscourts.org, scrolled down to “Attorney Admissions,” and clicked on “July 2005 Results.” Then I frantically scrolled through the list of 338 numbers in search of number 161 – hoping beyond hope that I would see the word “Pass” and not “Fail.”

All of this happened while Keen was waiting anxiously on the other end of the phone. I was petrified to look, but I knew we didn’t have any other choice. It was kind of like getting ready to take your first parachute jump out of an airplane; you’ve worked hard and prepared well to get to this point, but there is still great trepidation about whether or not everything will go as planned.

Finally, I located the 150’s. 156, 157, 158 . . . and there it was! 161 – PASS! I immediately broke down crying and announced the good news to Keen, who promptly went into shock and handed the phone to our oldest son, Jared. Jared didn’t know why his dad handed him the phone, and I didn’t realize he had handed Jared the phone, so when I heard a new voice on the other end of the line, I felt like I was in the Twilight Zone. “Who is this?” I asked through sobs of joy. “It’s me, Jared. Mom, are you all right?” “Yes, please put your father back on the line!” It was the moment Keen and I had waited so long for and I wanted to savor every second with him – even if it was over the phone long distance!

Of course, Keen was absolutely exhilarated. “We did it, honey! You, me, God, the kids – everybody. We did it!” We’ve been pinching ourselves ever since and it still hasn’t completely sunk in that he passed. I told Keen that I don’t think I cried that hard when the kids were born. He replied, “That’s because you weren’t pregnant for seven years!”

Back when Keen was hauling trash for a living, he prayed this simple prayer: “Lord, if You want me to be a trash man for the rest of my life, then I’ll accept that. But if possible, and if it’s Your will, I pray that one day I can make money using my mind instead of my back.”

Keen and I give thanks and glory to God that on September 30th, when he is sworn in, that prayer from so long ago will finally be answered.

One time when I was having a conversation with my father, I made the comment, “Praise the Lord,” and my dad responded, “Praise the Lord? Praise that hardworking husband of yours!” Yes, it’s true that Keen has worked very hard to achieve his goal, and I am so very proud of him for that. But without God’s help, guidance, wisdom and provision, none of this would have been possible. As the Bible says, “I can do all things through Christ who strengthens me.” (Phil. 4:13) That’s why it’s very important to us that we “give credit where it’s due.”

In addition, although we have made many financial sacrifices to make Keen’s dream a reality, God has been faithful to provide for our every need. Like the Israelites who wandered in the desert for forty years, we have “lacked nothing.” (Nehemiah 9:21) And now that we are trusting God to bless Keen’s law practice, we want to give Him the glory in advance for any financial success we may enjoy in the future, for we remain ever mindful of the fact that “every good and perfect gift is from Above.” (James 1:7)

“Beware that you do not forget the Lord your God by not keeping His commandments . . . lest when you have eaten and are full, and have built beautiful houses and dwell in them; and when your herds and your flocks multiply, and your silver and your gold are multiplied, and all that you have is multiplied; then you say in your heart, 'My power and the might of my hand have gained me this wealth.'And you shall remember the Lord your God, for it is He who gives you power to get wealth.” ~ Deuteronomy 8:11-13;17,18 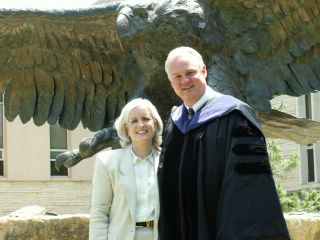 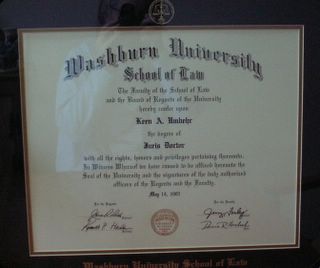