I’m Still Me
By Eileen Umbehr

My eyes appear slanted and my smile unique
It’s hard to understand me when I speak
I don’t look like others, nor they like me
I was born with Down Syndrome
But I’m still me

I have a disease and it has spread
Due to the chemo, scarves cover my head
My hair is gone and I feel weak
I have cancer
But I’m still me

When I went to school I was the only one
Whose skin was black, and the kids made fun
I laugh, I cry, and like you, I dream
My color is different
But I’m still me

For as long as I remember, people have mocked
They say my lifestyle is a shock
But I love who I love and I want to be free
I may be gay
But I’m still me

When I received the diagnosis, it didn’t take long
To decide what to do, with family history so strong
My chest is flat where my breasts used to be
I had a mastectomy
But I’m still me

Try not to judge a book by its cover
If we’ve never met, how can we criticize another?
There’s more to a person than the external view
No matter how you look, you’re still you. 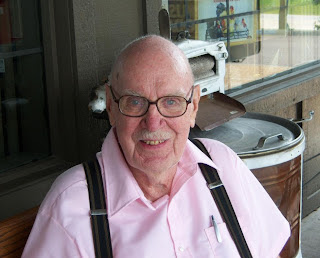 Last Friday my special friend Marne celebrated his 90th birthday. Marne and I met several years ago at the cafeteria of St. Francis Hospital. After striking up a conversation, we exchanged emails and have been friends ever since. 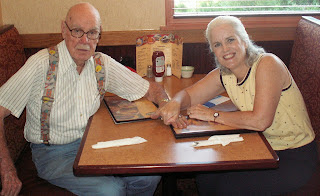 You’d never know by looking at Marne that he was 90 years young. He gets around great, takes care of himself, and still drives. In fact, he meets his buddies for lunch three times a week and goes out for breakfast every Sunday. Marne (rhymes with yarn) didn’t want too much fuss made over his special day, so we decided to have an informal celebration at McFarland’s Restaurant in Topeka. We all enjoyed lunch and had a nice cake with Marne’s picture on it. 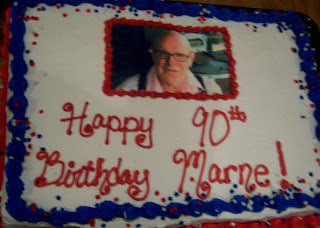 But what really made the day special was the group of friends who turned out to help him celebrate. There was Bessie from the Presbyterian Manor, “Big John”, Dick and his wife Nedra, another friend named John, Steve, Whitney, and myself. Also, two employees from the manor’s activity department, Jeanie and Beth, stopped by to wish Marne a happy birthday. (Some of the folks Marne invited weren’t able to make it, so Marne good-naturedly reminded each of the them to mark their calendars for July 11, 2009.) After singing happy birthday and watching Marne blow out his candles, we all enjoyed a piece of cake and captured one last picture of the entire group. That evening Marne shared the leftover cake with the residents at the manor. 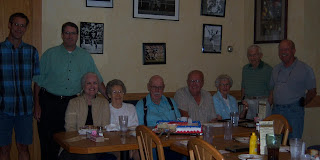 Marne was born on July 11, 1918, in Clovis, New Mexico to Charles George and Nettie McClurkan Coates. He had three brothers: George, James and William, who served as Shawnee County Sheriff for a time. Marne also had one sister, Elizabeth Etta. (Two siblings – one boy and one girl – died in infancy.)

I was curious about the origin of Marne’s name and so I asked him about it. Marne explained that his father picked out his name after reading about the Battle of the Marne in the newspaper. The River Marne is in France, and the battle is said to have marked a turning point in World War I. The battle involved the last German offensive of the conflict and the first allied offensive victory of 1918. Marne’s middle name, Clyn (pronounced Kline), came from the doctor who was present at his home delivery – Dr. Clyn Smith.

Marne’s family moved to Topeka in 1924 and Marne graduated from Topeka High in 1936. After graduation, he went to work for the Santa Fe Railroad and served a four year apprenticeship before becoming an electrician. He retired in 1982 after 41 years of service. Marne never married, but he had a lifelong friend named Mildred with whom he shared many happy memories.

Marne also cared for his mother at home until she passed away. Marne has always been an outdoorsman. He enjoyed fishing, hunting, and shooting skeet. In fact, as a longtime member and volunteer of the Capital City Gun Club, Marne received the distinction of having a field named after him. On September 3, 2005, Field #3 at the club was officially named Coates Field in honor of Marne’s years of dedication and service. 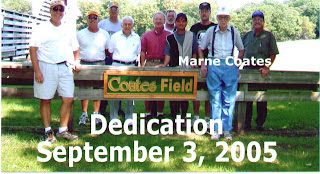 From the moment I met Marne I knew that he was a kindhearted, gentle man with no guile. I didn’t have to spend very much time with him to realize that he was one of those rare individuals with a heart of gold who didn’t have a mean bone in his body. It has been a joy and a privilege to call Marne Clyn Coates my friend.

“No man or woman of the humblest sort can really be strong, gentle and good, without the world being better for it, without somebody being helped and comforted by the very existence of that goodness.” 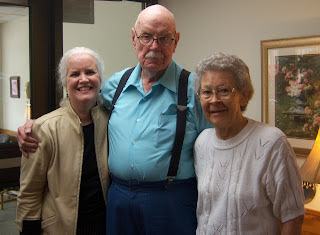