In the Eye of the Storm

“God is our refuge and strength, an ever-present help in trouble. Therefore we will not fear, though the earth give way and the mountains fall into the heart of the sea, though its waters roar and foam and the mountains quake with their surging.”
~Psalm 46:1-3

“God didn't promise days without pain; laughter without sorrow,or sun without rain. But He did promise strength for the day, comfort for the tears, and light for the way.”
~ Author Unknown

When I last wrote, we still had not heard anything from our son Jared and his family who were in Bay St. Louis, Mississippi when Hurricane Katrina hit. It would be another twenty-four hours before we would receive any word from them at all. Erin’s mother, Lu and I talked on the phone both days, trying to reassure one another that our children and grandchildren were physically safe.

As I mentioned last week, Jared, Erin, Asher and Gabe, (and their pets, Chance and Snowball), decided to wait out the storm in a shelter located at the naval command post at Stennis Space Center in Mississippi. Jared said it’s like a city unto itself, with a backup generator and water supply. Plus, the building was constructed to sustain a Category 5 hurricane, and thank God it did!

“We’re safe, Mom, we’re all safe,” he said. “We’re on our way to Grandma and Grandpa’s in Texas right now. It’s unbelievable, Mom. I’ve never seen anything like it in my life. It looks like a bomb exploded. We saw a U-Haul hung up on a light pole. Cars became ram rods and were sticking out of the sides of store windows. It’s like a war zone down here!”

Coincidentally, I located a picture of that U-Haul truck on the internet and sent an e-mail to Romy Kettlewell of Baton Rouge, Louisiana, who said that her husband, Don took the picture on Hwy. 90 (also known as Beach Boulevard) in Waveland, Mississippi. Thanks to the Kettlewell’s for giving me permission to share their pictures. 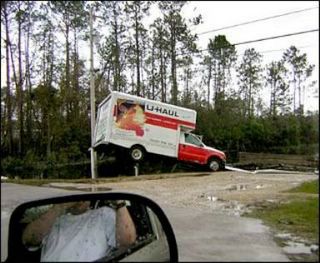 Pile of cars on Hwy. 90 in Waveland, Mississippi. Photo by Don Kettlewell 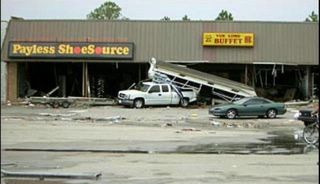 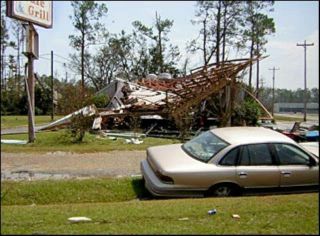 Getting back to Jared and Erin, Jared said that it proved to be a real blessing that they took their cars to the Space Center because there wasn’t any flooding there. In addition, the roads nearby were cleared fairly quickly, so they loaded up the kids and headed to their apartment to survey the damage. This is Jared’s account of what they discovered when they arrived:

“The roofs of most of the units had been blown off and windows broken, but the roof over our unit was still in place and none of the windows were broken. So for a brief moment we thought we might have been spared, and I was thinking, ‘Praise God’. But when I opened the door to our apartment it looked like everything we owned had been put in a giant washing machine full of mud and tossed back out. Erin was pulling baby pictures out of the mud. We lost everything, Mom. The neighbor’s floor fell through into our apartment and our refrigerator was up on the counter. The water went up to the ceiling, so if we would have stayed, we’d all be dead.”

“In the world you will have tribulation; but be of good cheer, I have overcome the world." ~ John 16:33b

Before Erin entered the apartment, Jared tried to inject a little humor into the situation by telling her she better take off her shoes so she wouldn’t track mud on the carpet. Asher’s first reaction to the mess was, “Gross!” Then Jared said, “Look, Asher, our refrigerator is up on the counter.” And Asher replied, “Cool!” I’m really hoping that he isn’t too traumatized by the whole event and that Gabe is too young to remember it.

But the events of the past week have been disturbing for everyone involved, including those of us on the parameters of the tragedy, not to mention our country as a whole. The destruction and devastation of Hurricane Katrina was so massive and so widespread, it’s almost incomprehensible.

When the eye of the storm passed over the Space Center, everyone was told that they could go outside and walk around. Jared said it was like someone turned off a switch. It went from ferocious blowing winds and torrential rains to an eerie stillness and absolute silence. So Jared, Erin and the boys literally walked around in the eye of the storm. That was around midday on Monday, and they didn’t step outside again until about 5:30 that evening after Hurricane Katrina had finished wreaking havoc on several states.

Erin said that when they were driving to and from their apartment, they saw several people wandering around in the streets. She said it made her realize how fortunate they really were.

“God have mercy on them. To some, hope is even a struggle. But when the sun comes out, God breathes new life with hope and joy for tomorrow.” ~ An e-mail from my friend, Mae

Yes, Jared and Erin lost their worldly possessions – and that would be extremely upsetting to any of us – but they are so thankful to God that everyone in their family survived (including their pets), both of their vehicles were spared, and they had a place to go for shelter.

When they finally arrived at Keen’s parents’ home (it took longer than expected because a bridge was knocked out by the storm), they were greeted by hugs from several members of Keen’s family, as well as a delicious steak dinner and corn-on-the-cob.

The next day, Keen decided that he and Kirk should drive down to Texas to be with all the family during this difficult time. Kirk’s principal at Wabaunsee High School, Dr. Larry Anderson, was so kind and understanding. He not only granted Kirk permission to take time off from school, but he wrote a personal letter to Jared and his family expressing his condolences for their loss.

Keen and Kirk drove about twelve hours straight through the night. The next day, life threw everyone another curve ball. What’s that old expression? “If it’s not the hogs, it’s the windmill.” Well, this time it was the well. Without any running water, it was time to find another place to lay their heads. So everyone loaded up their stuff and drove over to Keen’s brother’s house. It might have been more than Kevin and Falethesa bargained for, but you’d never know it by their gracious hospitality. As a matter of fact, they tried to talk them into staying!

The situation is constantly evolving, but as of this writing, everyone is caravanning back to Kansas so Jared, Erin and the boys can move into our house in Manhattan. It has a queen-sized bed, bunk beds, two bathrooms, a washer/dryer and all the necessary kitchen appliances. And I’m so glad I stayed home because it gave me the time and opportunity to get everything ready for them on this end. Now the refrigerator is fully stocked, the air conditioner is on and the boys have some new clothes and a few toys waiting for them when they arrive.

Unfortunately, Jared can’t stay very long as he will have to return to Mississippi to continue his duties with the Navy. Whether he’ll continue to be stationed there or transferred to another part of the country is yet to be seen. So they’ll wait until they know something more definite before making any final decisions. More than anything else, they just want to be a family again. Meanwhile, I guess we’ll just have to take it one day at a time.

"Wherever we are, it is but a stage on the way to somewhere else, and whatever we do, however well we do it, it is only a preparation to do something else that shall be different." ~ Robert Lewis Stevenson (1850-94)

“Fear not; there is nothing to fear for I am with you; do not look around you in terror and be dismayed, for I am your God. I will strengthen and harden you to difficulties; yes, I will help you; yes I will hold you up and retain you with My victorious right hand of rightness and justice. For I, the Lord your God, hold your right hand; I, Who say to you, Fear not, I will help you!” ~ Isaiah 41:10,13 (Amp) 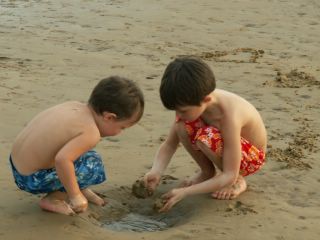 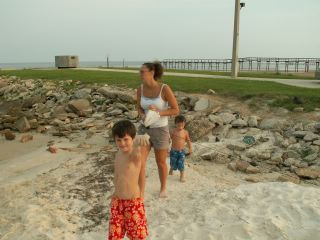 Erin & boys walking along the beach 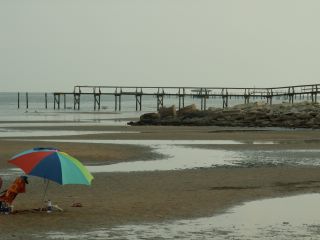 Umbrella on beach - such a peaceful scene, but not for long 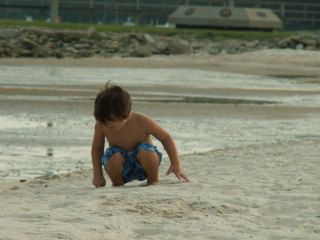 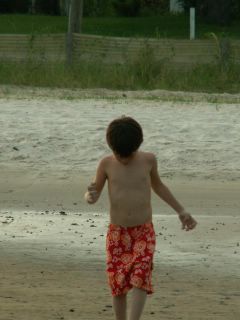 Asher walking along the beach
Posted by Eileen Umbehr at 2:49 PM