“Dear brothers and sisters, whenever trouble comes your way, let it be an opportunity for joy. For when your faith is tested, your endurance has a chance to grow. So let it grow, for when your endurance is fully developed, you will be strong in character and ready for anything.” ~ James 1:2-4 (NLT)

Ups and Downs
By Eileen Umbehr

All of life
Is ups and downs
Happy, sad
Smiles, frowns

Fridays, Mondays
Births and deaths
No one escapes
Life’s trials and tests

Victories, defeats
Contentment and sorrow
The joys of today
The heartaches of tomorrow

But come what may
I will not complain
My hope is in God
Both in sunshine and rain. 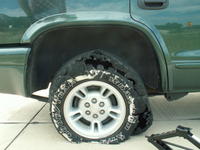 (Taken after a recent blow-out)

My number one goal in writing my column is to keep it real. By that I mean that I never want to be guilty of only sharing the “up” times in our lives, because that’s just not a true picture of the way things really are. Yes, we have been richly blessed with a happy marriage and family, but that doesn’t mean that we don’t have to work very hard at maintaining that status and it doesn’t mean that we don’t face the same struggles that everyone else faces in their lives.

Basically, I am a positive person (although that hasn’t always been the case), so naturally I tend to be positive in my writing. But I would be doing a great disservice to my readers if I gave the impression that our life is always peaches and cream, because it isn’t. We each have our own individual flaws, and we are constantly working on improving ourselves, with God’s help.

I once told my sister Joanne that when I share one of our family pictures with others, I don’t want them to see the image of a “picture-perfect family,” but rather, I want them to see an image of a “picture-perfect example of God’s grace.” In other words, even though we have had our share of ups and downs, the fact remains that God’s grace has seen us through every trial and has helped us overcome every obstacle along the way. That’s what I want people to see when they look at our family picture.

Don’t get me wrong, the majority of the time Keen and I enjoy marital bliss, with only occasional interruptions from an argument where we – okay, I – could be heard by anyone within a three-mile radius. But I must admit that the past couple of months have been some of the most difficult for us, second only to the period of time when we were involved in the lawsuit and awaiting a decision from the Supreme Court.

Even before Hurricane Katrina destroyed Jared and Erin’s apartment, Keen and I were going through one of the most intense periods of this entire academic journey. The amount of preparation he had to devote to the bar exam prevented us from enjoying the quality time we would normally have spent together. So our life was no longer in balance, resulting in numerous misunderstandings and arguments. I tried my best to be understanding, but eventually I started feeling neglected, which always brings out the worst in me. But Keen was under such tremendous stress leading up to the exam that his emotional reserves were on empty, too. That’s when tensions reached a fever pitch at our house.

I’ve often thought it would be so much easier if I was self-sufficient and didn’t have any emotional needs, but that is simply not the case. We all have needs and it is only when our individual needs are met that we are fully equipped to go out into the world and fulfill our God-given destiny.

“Nevertheless, neither is man independent of woman, nor woman independent of man, in the Lord. For as woman came from man, even so man also comes through woman; but all things are from God.”
~ I Corinthians 11:11,12 (NKJV)

In Gary Chapman’s book, Five Love Languages: How to Express Heartfelt Commitment to Your Mate, he talks about how we all have different ways that communicate love to us. Some people feel loved when they receive gifts. That’s not me, which is probably a good thing, since Keen isn’t much of a gift-giver. However, I quickly identified my “love language” – quality time. There is nothing I enjoy more than spending time with Keen – my high school sweetheart, the love of my life and my best friend. I love walking and talking with him, or just sitting on the couch with a cup of tea. That’s when I feel the most loved. For me, spending time with Keen is like putting gas in my tank; without it, my emotional engine light comes on and eventually I shut down all together.

Even after the bar exam was over, Keen and I seemed to suffer from post-traumatic “test stress.” Then the hurricane hit. In the midst of trying to be supportive to Jared, Erin and the boys, we were busy setting up Keen’s law office in Topeka. This involved buying fax machines and printers and phones (AND filling out those “oh-so-fun” rebate forms), as well as setting up new checking accounts and learning a new system of billing. In addition, Keen has had his hands full with several new clients.

Meanwhile, Jared and Erin’s lives were in a constant state of flux. It’s been painful for us to witness because we’ve been completely helpless to do anything about it. Although Erin had a place to stay in Manhattan and she enrolled Asher in kindergarten, their ultimate goal was to reunite as a family once again. However, when Jared checked into the few apartment complexes’ that were still in operation, he learned that there were 150 people on the waiting list. Then Erin checked into hotel accommodations in the area, but they were booked for the next eighteen months as well. It just seemed like every road they went down led to another dead end.

Then there was a light at the end of the tunnel when the Navy announced that they would be opening up some housing units on base at Pensacola, Florida. Although this would be about two hours away from where Jared worked, the Navy had plans to provide shuttle transportation every weekend. To make a long story short, for reasons beyond anyone’s control, the Pensacola plan fell through at the last minute. Erin said she felt like someone was pushing the buttons of her life like a tape recorder: Stop – Play – Pause. Understandably, the uncertainty and confusion became almost unbearable.

"Whether you turn to the right or to the left, your ears will hear a voice behind you saying, ‘This is the way, walk in it.’” ~ Isaiah 30:21

Finally, in the 11th hour, after they had almost resigned themselves to living apart again, some base housing became available back in Gulfport. Jared’s Chief went to bat for him since Jared has three dependents, and they assigned them a four-bedroom housing unit on base. Now Jared can be home with his family every night and Erin can return to her nursing job at Gulfport Memorial if she wants to. As an added bonus, the babysitter Erin had previously lined up lives right there in Gulfport, too. Although the surrounding area is still in bad shape after Katrina, they can always drive to outlying areas for shopping and recreation. The important thing is that they will finally be together – thank God!

In the midst of all this turmoil, my friend Maggie (from my days at Hudson Junior High), and her husband, Randy, sent some sunshine Jared and Erin’s way by surprising them with a check for five hundred dollars! Randy and Maggie live in Wisconsin and have three sons of their own, but they generously decided to donate money to some hurricane victims that they knew personally. When I called Maggie to thank her, she said, “Just tell them that God guided us to do it and it just felt right.” Thank you, Randy and Maggie, for having such big hearts and for helping our kids get through one of the darkest times of their married life.

“That you may give him the power to hold himself calm in the days of adversity . . . For the Lord will not cast off nor spurn His people, neither will He abandon His heritage. When I said, ‘My foot is slipping,’ Your mercy and loving-kindness, O Lord, held me up. In the multitude of my (anxious) thoughts within me, Your comforts cheer and delight my soul!” ~ Psalms 94:13a,14; 18,19 (Amp)

May God bless everyone for their love, support, encouragement and prayers! 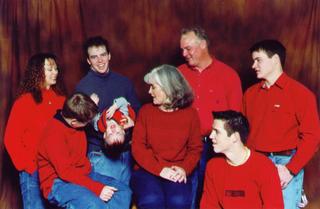 A not-so-perfect picture of the Umbehr family from Christmas, 2000
Posted by Eileen Umbehr at 3:56 PM