“A hero is a man who does what he can.” ~ Roman Rollard

Today is September 11th, 2005, the anniversary of another horrific event in American history; a time to reflect on all the fallen heroes who have given their lives to save another.

Therefore, this week I’d like to share a column from my fellow writer and friend, Tom Parker. Tom and his wife Lori live in Blue Rapids, Kansas, where they own and operate the Blue Rapids Mercantile. Tom also writes a weekly column titled “The Way Home,” which is published in the Washington County News in Washington, Kansas. A collection of Tom’s better columns will soon be published in a book titled “Dispatches from Kansas.”

On August 18, 2005, Tom’s cousin, Officer Richard (Ricky) Smith, a 25-year veteran of the Albuquerque Police Department, was shot and killed in the line of duty. According to the Officer Down Memorial Page web site (www.odmp.org), Ricky and his partner, Officer Michael King (a 22-year veteran of the department), were shot and killed while attempting to take a man into custody for a mental health evaluation.

When the officers located the man near an intersection, they were ambushed in his front yard and immediately fired upon. They were unaware that the patient had already killed three other innocent people. Officer King was shot first. Ricky was behind him and was able to draw and fire one round before calling for assistance and succumbing to his wounds.

The suspect fled the scene on a motorcycle, but was located approximately two hours later and taken into custody. He has been charged with murdering Officer Smith and Officer King. He was also charged with two murders that had been committed earlier in the evening at a local motorcycle store, as well as the murder of a New Mexico Department of Transportation worker which had occurred that morning.

Tom Parker wrote two columns in honor of his cousin’s memory. In the first article he shared about the many condolences that were pouring in from around the nation. Justin Marquis of the Sutherlin, Oregon Police Department, left this message on the Officer Down web page: “Rest now, brother, after a job well done. We’ll take it from here.”

My heartfelt sympathy goes out to the friends, families and colleagues of Officers Richard Smith and Michael King.

Now, with Tom Parker’s kind permission, I would like to share the text of his second column:

Go with me, my good angels, to my end;
And, as the long divorce of steel falls on me,
Make of your prayers one sweet sacrifice,
And lift my soul to heaven.

If there is any immortality to be had on this earth it is through the selfless sacrifice of a life lost in the service of others. Twenty-five years to the day that he joined the Albuquerque Police Department, Officer Richard Smith’s bullet-riddled body was laid to rest. His perdurable legacy is this: over two thousand people crowding the church, a police procession stretching for eight long miles under a cloudless New Mexican sky, and hundreds of common citizens lining the roadways for this, his last watch.

The immediate family rode in five gleaming white limousines, but in a sense every man, woman and child there were part of the family. For the police there was the camaraderie of brothers in arms, the thin blue line which had been sundered in a muzzle flash and just as quickly reformed and solidified and strengthened by indomitable will and courage. For the family there was a deep hole that seemed bottomless and yet was already filling with remembrances and memories and the consoling realization that he was our own and he was the best and that his presence would forever be part of us, stronger than bone, deeper than blood, closer than the soul. For the strangers beside the road he was a symbol crafted of flesh and blood and his blood had been spilled to keep them safe, and their presence was an act of thanksgiving and respect.

Around the time the motorcade cleared Tijeras Canyon and began its descent into the city, I stood bewildered in a field wet with rain. Dark storm clouds rolled off to the east, dragging rain and lightning in their wake like an unruly and tempestuous child. Overhead the sky was roiling, light and dark clouds seething and writhing and shredding apart to reveal tattered shades of blue. Not for the first time I wondered if I had done my cousin a disservice by remaining in Kansas, if the distance separating me from my family and the cordon of uniformed men and women somehow lessened my placement in their ranks.

Nor did my surroundings diminish the sensation of disjointedness. Even as I imagined the city unfolding before the convoy, I watched four white-spotted fawns bound away in pursuit of their mothers. No sound of traffic nor any other thing than the low rumble of the grain elevator and the song of a cardinal and my own shallow breathing. Rather than vehicles and a violent cityscape and the incessant wail of sirens, I presided over nodding goldenrod and brome gone to seed and rainpools shining silver in the morning light.

I had wandered all night through empty streets and alleys, past churches whose doors were barred and nailed shut, down broad greenbelts that faced backyards devoid of any life other than a solitary majestic elk, but what I sought was unknowable and unfound. By dawn I was exhausted, and woke and went to work as always and returned as thunder faded and light grew ascendant, and I kissed my wife as she left for work and then wandered into the field to ask the day for answers. And none were forthcoming.

The literal translation of bewilder is “to lose in pathless places, to confound for want of a plain road.” Such was my state of mind as I thought of my family accompanying Ricky to his end, and me here alone with no idea how to say goodbye without feeling inadequate. As if by my willful exclusion I had abandoned them. What rite, what ceremony, could bridge that distance and set aright this terrible emptiness? Knowing none, I stepped farther into the field. Grass soaked my pants to my knees. Sunlight tore through a rent in the clouds and sparkled on the dew and pinned me in place.

Hundreds of miles away, as the hearse pulled away from the funeral home and began the long slow drive to the graveyard, an alert tone cleared all traffic from police radios. “All units will ten-three,” the dispatcher said, and every officer in the city paused in what they were doing except for the motorcade, and they listened and struggled with the words.

“This is the final dispatch for Officer Richard Smith,” the dispatcher announced. “It is with a heavy heart that we say goodbye to you. In life you were a loving husband and a wonderful father. As a police officer and White Striper, you always carried yourself with such class and integrity you were often looked to for guidance. Always smiling and full of life, it’s easy to see why those who met and knew you appreciated and loved you. We will never forget that you gave the ultimate sacrifice.

In all that vast city, on every police radio, in the hearts of all who heard, there was only silence.

And in the silence heard even here I said a short prayer for Ricky’s soul and for his wife and daughter and father and mother and all the rest who were there and not here. And even as I uttered the words I saw first one and then a dozen and then a thousand dragonflies wending their way southward, weaving and skirling through the skies and above the grasses and all about me in an intricate, untraceable pattern, and I raised my arms and cast the prayer off and they took it and made it their own. I imagined in my weariness that my prayer was borne aloft by thousands of glittering restless wings, magnified and translated into an unspoken language which knows death is only another form of migration, and that the end of the journey is home. 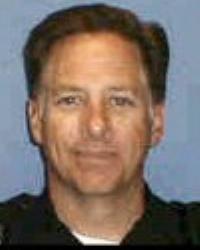 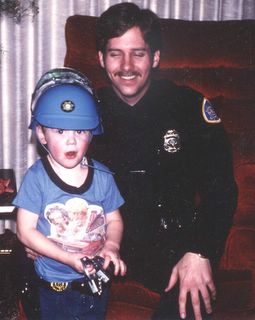