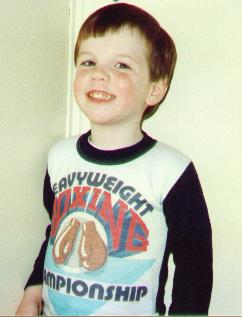 “Train up a child in the way he should go [and in keeping with his individual gift or bent], and when he is old he will not depart from it.” ~ Proverbs 22:6 (Amp)

"We should say to each child: Do you know what you are? You are a marvel. You are unique. You may become a Shakespeare, a Michelangelo, a Beethoven. You have the capacity for anything.” ~Pablo Casals (1876-1973) ~ Spanish cellist, composer,conductor, pianist, and humanitarian

With each of our four sons, Keen and I had a distinct sense about their individual characteristics. We described Jared as wise, Josh as strong, Keen as special and Kirk as a combination of “all of the above.”

Our third son, Keen II, just turned twenty-one on July 8th, and to say that he is special is an understatement. Keen is especially talented, especially funny, especially caring and especially tenderhearted – towards God and others. Recently, when one of his coworkers at the Department of Revenue lost his hair due to cancer treatments, Keen and several others in the office decided to shave their heads to show support for their colleague.

Keen is a free spirit who has never been afraid to be different. In fact, he goes out of his way to be “unlike the rest.” When it comes to clothing, he has a style that’s all his own. What might be considered weird for most people somehow looks cool on Keener.

"Follow your own path, and let people talk." ~ Dante

There is so much more to Keen than meets the eye. He is a deep thinker who has a unique gift of writing. When he was in high school he shared some of his poems with me, and I must admit that I was in awe. They left me with the feeling that I had not even scratched the surface of who my son really is.

"Poetry is something to make us wiser and better, by continually revealing those types of beauty and truth, which God has set in all men's souls." ~ James Russell Lowell (1819-1891) ~ American poet, editor and diplomat

Here is an example of one of Keen’s poems:

Around this globe I wander
Without a sense of direction
Observing the paths that converge and diverge
Without the will of correction
Who are they to say
That I must make a selection?
When it is my life
That will crush the fear of dejection…
Round and round I go
Carefully being sure
To avoid the “flow”
This world doesn’t understand
-They just don’t know-
What it truly means to be a man
Yet, in this world I coexist
With all of the hatred and poverty
That has run amiss
Now I saunter near the “crossroads”
To see what I can see
I’m not shocked to know
That there’s no one here like me
Just the blank stare…
-Monotone voices-
Of people making other peoples choices
Just masses of nothing
Content to be less
Their life was over before it began
I will succeed; To you I confess
The 21st Century?
The century of success?
Ha…fooling ourselves blind
For people have not yet begun to progress
Rather, they’re satisfied to regress
The others have unraveled…
Not I.
I chose the road less traveled.

This is an excerpt from another poem Keen wrote titled Changes:

These tears I’ve wept
Because, have not I, a defense to battle the strife
Where does it end?
Will we let it remain?
Why should I assume my beliefs will be the ones that transcend?
When hate continues to conquer this orb with an eternal reign
What if I were like all of the others and were content to blend
With those who care not for this ever-present pain?
I have not the strength to fight it all
Yet I do not possess the will to let it fall
I’ll fight with all my soul
I’ll stand up
I’ll be bold
For let it be known:
And men be put to shame
On my own if I must
I will be the change.

“Do not go where the path may lead. Go instead where there is no path and leave a trail." ~ Robert Frost

Whereas most of my poems are quite simple, Keen’s writings capture and express his innermost thoughts in a much deeper way. I know he has many more literary works which he has not yet shared, but I am privileged to have been given this rare glimpse into our son’s hidden talent.

Keen has many other gifts as well. Besides being a natural-born athlete, he has an amazing ability to relate to people of all ages and from all walks of life. He is easy going, non-judgmental and full of wisdom. But it’s not enough just to possess wisdom; the true gift is in knowing how to deliver that wisdom with compassion so as not to crush the spirit of the hearer. I myself have been the recipient of this unique gift. I have cried tears as I’ve listened to my own son gently yet firmly tell me how God would want me to handle a particular situation. Isn’t it supposed to be the other way around? Shouldn’t I be the one imparting wisdom to my child? But I am humble enough to accept that God often uses other people in our lives to give us guidance in our darkest hours.

I’d like to close by sharing a portion of a card I sent to Keen last fall. The text was written by Ginnie Job:

I just want you to know how glad I am you’re my son
An how lucky I think the world is to have you in it.
You earn respect because you honor commitments,
Work hard, and play fair.
Your generous spirit and good nature make you a fine man
And such a pride to me.
I’ll always treasure a heart full of memories of “my little boy.”
But with every day that passes, my appreciation deepens,
And my admiration grows for the remarkable man you are….
The son I love so much! 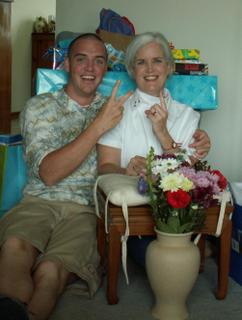 Mother and son, Eileen and Keen II on Keen's 21st Birthday
Posted by Eileen Umbehr at 10:29 AM