“Give your hearts, but not into each other’s keeping, for only the hand of Life can contain your hearts . . . And stand together, yet not too near together. For the pillars of the temple stand apart, and the oak tree and the cypress grow not in each other’s shadow.” ~ Kahlil Gibran, Lebanese philosopher and author of The Prophet 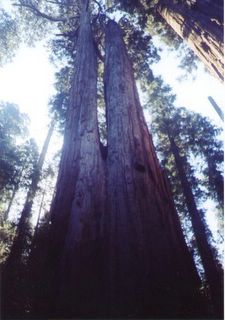 Redwoods of California (photo taken by my sister, Mary)

Some people have the notion that true love means never spending a day apart – and I’m not disagreeing – if that’s what works for them. Don’t get me wrong – Keen and I are best friends and we love spending time together. At the end of a busy day we’re always anxious to hear about what new adventures transpired since last we talked. But we also believe in giving each other some space when needed. It’s an interesting dichotomy.

For example, I am writing this column from our Manhattan house where I’ll be spending some time for the next two weeks. My purpose is twofold: 1) to get back to work on my book revisions, and 2) to give Keen the time he needs to concentrate on studying and preparing for the bar exam. In fact, this morning on the phone he thanked me for being so understanding during this stress-filled time. He said that one of his law school colleagues was close to tears over the fact that her husband was angry at her for not being as attentive. On top of that, she said he gave her a long list of errands to run which included taking the car in for a minor repair.

As I mentioned in last week’s column, when Keen was attending Kansas State University, he stayed at our house in Manhattan three to four nights a week. That gave him the much-needed time to focus on his studies – and it was a real blessing not to have to commute back and forth every day.

Now this next statement isn’t going to sound quite right, but Keen’s absence during that time changed the whole dynamic in our home – in a positive way. Whereas normally Keen and I would spend the majority of our time talking to each other, on the nights when he was in Manhattan, I would focus more of my attention on spending quality time with Keen II and Kirk Van. I remember many hour-long conversations with Keener, which was a precious commodity that I didn’t take lightly. My philosophy has always been that if your teenager wants to talk, stop whatever you’re doing, because nothing else is more important. It’s when they stop talking that you should start to worry. As for Kirk and me, we started a new weekly tradition during that time. Every Tuesday he and I would pick out a new recipe and bake a special dessert together. Kirk really looked forward to that one-on-one time with Mom – and vice-versa.

Another positive that resulted from that decision was the unique opportunity Keen and Josh had to be part-time roommates. Keen always talked about how much he cherished the time he spent sharing meals and conversations with his adult son. In fact, KSNT (the NBC affiliate in Topeka) did a news story about father and son attending college together. The report included a humorous story about a role-reversal incident when Keen forgot one of his school books at the house and Josh had to bolt six blocks on foot to bring it to him. “I told him he’s irresponsible,” Josh said with a grin.

Even before we were married, Keen and I spent two years apart. After meeting in Singapore when we were fifteen years old, we dated for a little over a year in high school before my family moved back to Minnesota. Then we only saw each other for one week in between when Keen came out for my graduation from high school. No one thought it would last, but we continued to grow close in heart through our letters (that was before the days of email). I’ve always emphasized the importance of good communication to my boys, because that’s the thing that really makes or breaks a marriage – besides having God at the center of the relationship, of course.

Then there was the time I spent in Nevada writing our story (nearly five months in all, with three weeks off for Christmas). When Keen saw how frustrated I was over the fact that I couldn’t seem to make any significant progress on my book at home, he didn’t just pat my hand and tell me he understood; he suggested that I think about going someplace secluded to write.

“A soul can create only when alone…” ~ Abraham Joshua Heschel

Keen is always so quick to praise me for being supportive of his goals and dreams, but how many men do you know who would not only support such a decision, but suggest it? Greater love hath no man than this!

In any event, my absence during that time also changed the dynamic of our home in a positive way, giving Keen and Kirk the chance to bond by spending more time together while equally dividing the numerous household responsibilities. (By the way – Kirk continues to do his own laundry. Yeah!) As for our relationship, if anything, Keen and I grew even closer during that time. We communicated regularly over the phone, and I wouldn’t have missed those priceless love letters for all the tea in China!

Yes, I believe it is possible to grow apart; that is, to grow together while being physically apart. Giving your partner room to grow and pursue their own individual dreams is one of the greatest gifts you could ever share. Of course, that may not involve anything as drastic as renting an apartment in Nevada, but it might simply mean giving the other person the liberty and time they need to engage in the activities they enjoy, such as: spending time with friends, watching the news or sports on television, puttering around in the garage, writing, reading, fishing, going to the movies, shopping, traveling, golfing, or just spending quiet time alone. (A good book on this subject is “One Minute for Yourself” by Spencer Johnson, M.D.)

"Alone time is just as important as sleep in soothing the spirit and replenishing the body." ~ Dr. Phil McGraw

A guest on The Today Show, Dr. Stephen Treat, had this advice about how to handle the retirement years:
“If one spouse is saying, ‘Oh boy, won't it be great? We'll get to spend 24 hours a day together,’ then all sorts of red flags should be going up. Hold on to your individuality. If you liked tennis or enjoyed your book club, continue to be involved in those activities that make you who you are." Dr. Treat concluded by saying that retirement should be a combination of togetherness and individuality.

After all, love is about freedom, is it not? 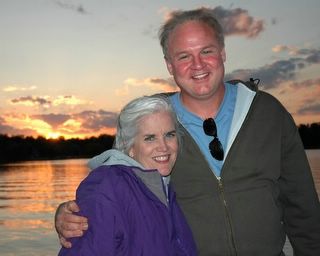 Keen & Eileen at Van Kirk reunion in Minnesota, 2004 (Photo taken by my sister Patricia Van Kirk)
Posted by Eileen Umbehr at 5:02 AM