On the Road Again

Believe it or not, I have another trip to report on this week. A few days after returning from Colorado, my daughter-in-law Erin called and asked me if I would be interested in a free trip to Mississippi to visit/babysit my two grandsons, Asher and Gabe. Since I had really been missing the boys and Erin was starting a new job and needed some help, the two pieces of the puzzle seemed to fit together perfectly for both of us. The next thing I knew, I was “on the road again.”

I had lots of excitement during my trip, starting with a mishap on my way to Kansas City when I got caught in a downpour and decided to pull off the road near a construction area. My right tires went off the shoulder of the road, leaving me high centered. My brother Bill and his son Kyle from Olathe offered to drive to the sight with some chains, but a police officer stopped by and said that it would take a tow truck to lift me up and over the ledge. When he told me that the fee would probably run between $75 and $100, I commented that it was almost as bad as a speeding ticket, except it won’t go on my record. Thankfully, the kind folks from Bulldog Tow in Lawrence had me out in no time, and they only charged me $60.00.

When I called Erin to tell her about the unfortunate event, she said that she hoped it wasn’t any indication of how my week in Mississippi would be. I’m happy to report that it was not.

I so enjoyed spending time with Erin and the boys and getting a chance to see their new apartment and surroundings. Unfortunately, Jared was in Kentucky for training, so I didn’t get the chance to see him. But we had a wonderful week together. 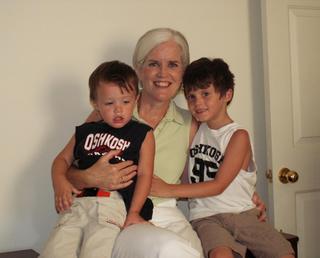 Gramma in her glory with Gabe & Asher


My only complaint was the heat. I have never experienced anything like it in all my life – even in Singapore which is about 100 miles from the Equator and has very high humidity. Within five minutes of being outside, your clothes would be drenched in sweat. Luckily, they have a pool in their apartment complex and they are only five minutes from the beach.

Erin had orientation for her new job all week, so it was my responsibility to see that Asher got on the bus for kindergarten and then meet him when he got off the bus in the afternoon. 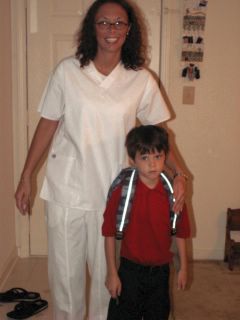 Erin & Asher ready for the day

He looked so sharp in his little school uniform. They can mix and match red, navy and white polo shirts with navy or khaki shorts or slacks. Whenever Gabe saw Asher get off the bus he would run to meet him as fast as his little feet could carry him and give his brother a big hug. “I missed you, Ashur!” 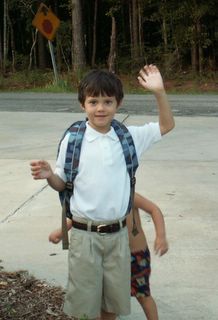 Asher waving before he goes to school

The first day I arrived we all went out to Chuck E. Cheese for supper and had a fun time. Asher knows me very well, so he is always very affectionate. He says things like, “Gramma, I just want to tell you something. I love you soooo much.” Gabe hasn’t been around me as much as Asher so he has a tendency to keep his distance at first, but this time he warmed right up to me. It was Gramma this and Gramma that and, “Gramma, watch me!” It was funny though, the next morning when I emerged from my bedroom in my nightgown and glasses and messed up hair with no make-up, he took one look at me and asked, “Gramma? Is that you?”

But the story that seemed to generate the most amount of laughter at my expense had to do with their cat, Snowball (who happens to be jet black in color). One morning I opened up the double doors leading out to their deck when I saw a black cat leap off the edge. I immediately sprang into action and recovered what I assumed to be their runaway cat. Throughout the day, I petted the cat and Gabe enjoyed playing with him. He was very friendly. In fact, Gabe was absolutely giddy with glee over the fact that the cat would even allow him to get within three feet of him, much less pet him. I later learned that the real Snowball runs like a bat out of hell whenever she sees Gabe coming. So I took several pictures and some video footage of Gabe petting the cat and jumping for joy, shouting: “He likes me! He likes me! The kitty likes me now!” 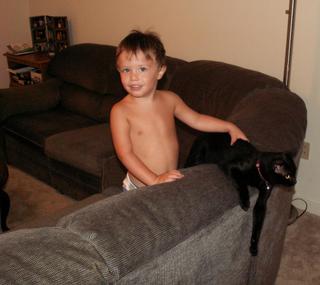 It wasn’t until 2:30 in the afternoon when I noticed one black cat lying on the bed and another black cat walking down the hall. As it turned out, the cat I had “rescued” belonged to someone else! So when Erin returned home, she identified the imposter and put him back outside.

I wish I could say that was the end of the story, but it wasn’t. Apparently, Snowball’s cat feelings were deeply hurt by the intrusion of a stranger on her turf and she wanted everyone in the house to know about it! So when Asher went to pet Snowball, she hissed at him and scratched his nose, drawing blood and causing tears. I felt just terrible, so I later tried to soothe Snowball by petting her and telling her what a good cat she was. She allowed me this privilege for approximately 15 seconds before biting down on my hand with her very sharp teeth. Thankfully, all was forgiven by the next day and Snowball had returned to her normal cat self.

My only other cat mistake was when I filled Snowball’s food dish with Kibbles ‘N Bits, which is actually for the dog. As a result of this oversight, the cat woke poor Erin up in the middle of the night meowing because she was hungry.

Their dog is a very sweet beagle named Chance that they got from the pound in Manhattan four years ago. I had always liked Chance – that is, until I had to take care of him in that heat. Whenever we went outside, he took his sweet old time sniffing around until he found just the right bush to do his business. And even with double Wal-Mart bags, I could never get used to cleaning up after him. 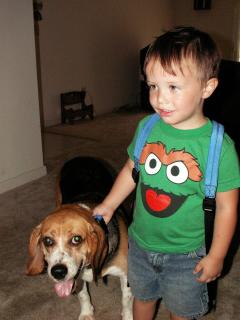 I’ve never had the patience needed for pets; I guess I used up all my patience on my kids – and I still came up short in that department!

Spending a week with a busy mother of two small boys reminded me of how all-consuming motherhood really is. Erin has really had her hands full with Jared being in the Navy. Shortly after she and the boys moved to Mississippi to be together, Jared was called away for the entire month of August, leaving Erin with the job of unpacking all the boxes and getting settled into their new apartment. On top of that she’s been job hunting and getting Asher ready for kindergarten. Basically, she’s had to be all things to all people.

As I watched Erin read bedtime stories to the boys and lead them in their nightly prayers (“Bless Daddy and everyone we love….”), feed them, bathe them, swim with them and hug them, I felt so much admiration in my heart. She is handling so much so well. And now she is adding a new part time job to the mix. 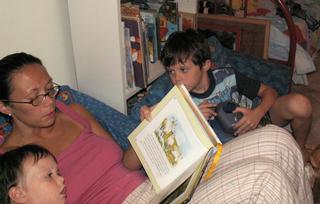 It reminds me of that new song by Jamie O’Neal called Somebody’s Hero. One of the verses goes like this:

I hope Erin knows how very proud we are of everything she has accomplished. Most of all, I hope she knows how blessed we feel to have her in our family and how grateful we are for the greatest gift we could ever receive - our two precious grandsons.

Something To Be Proud Of ~ recorded by Montgomery Gentry 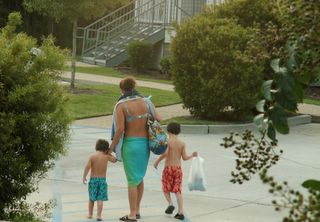 Erin & boys head off to the pool
Posted by Eileen Umbehr at 1:55 PM