Been There, Done That

“A journey is like marriage. The certain way to be wrong is to think you control it.” ~ John Steinbeck

There’s an old saying that goes, “If you fail to plan, then you plan to fail.” But that wasn’t the case with the journey Keen and I took to the beautiful state of Colorado.

After Keen finished preparing for the bar for what seemed like an eternity, we were in dire need of some time away. But we didn’t want a well-orchestrated, pre-determined list of scheduled events. We just wanted to head out and see what adventures we could discover.

Unfortunately, on the day we were trying to leave it seemed like all the forces of nature were conspiring to prevent us from getting out the door. Keen received several phone calls from individuals in need of legal counsel or representation. Since he’s been granted a temporary law license from the Kansas Supreme Court, he’s able to do a limited amount of legal work. However, that license will expire on September 30th (when the next batch of attorneys will be sworn in), so if he doesn’t pass the bar then he’ll have to go back to the drawing board and start preparing to retake the exam in six months. Of course we’re really hoping that won’t be necessary.

In any event, we encountered numerous delays including a garbage disposal that decided to die right after I poured some week-old goulash down the drain. Despite the late start, we decided to get the heck out of Dodge before one more thing could go wrong.

We drove about four hours before stopping in the town on Wakeeney, Kansas near Cedar Bluff Reservoir. We made last-minute reservations at The Butterfield Trail Bunkhouse. The proprietor, Donna Deines, gave us directions to their family farm and from there we followed her husband William to the bunkhouse.

We thoroughly enjoyed the rustic setting and simplicity of the small hunting lodge tucked into a grove of trees in the middle of a pasture. The following morning we awoke before sunrise and went for a walk on the surrounding land, capturing beautiful pictures of the Kansas prairie. When we returned we were treated to a delicious home-cooked breakfast. It was a very peaceful start to our first ever week-long vacation alone. 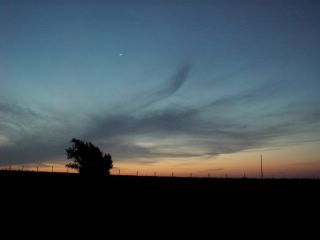 Sunrise at The Butterfield Trail Bunkhouse

The next night we landed in Glenwood Springs, Colorado, home to one of the fanciest resorts in Colorado – the Hot Springs Lodge & Pool. They have a 400-foot hot springs pool with varying degrees of temperatures (up to 104), two giant waterslides, and an 18-hole miniature golf course. They were completely booked, but it looked like a terrific vacation spot – and they’re open year-round.

From Glenwood Springs we drove to Grand Junction to spend a couple of days with my stepmother in her new home, which is located right at the base of the magnificent Colorado National Monument. It’s the ideal setting for the most beautiful sunrises and sunsets you’ve ever seen.

We didn’t waste any time touring the spectacular sights surrounding Grand Junction. On the first day, we drove to Moab, Utah to tour the Arches National Park. The drive up the mountains was a bit precarious, but well worth it. 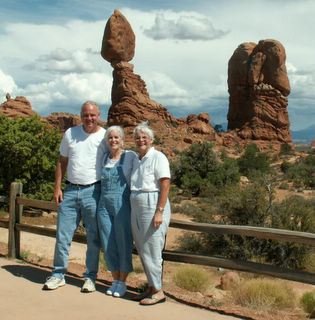 The following day we took another drive through the National Monument where once again, the view was simply breathtaking. 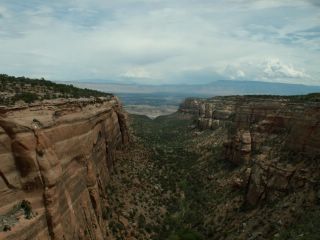 After leaving Grand Junction, we decided to return to Kansas via a different route, rather than taking I-70 back through Denver. So we headed south and stopped for lunch in Montrose. While browsing through an antique store, a woman recommended that we visit the town of Ouray, which is also known as the Switzerland of America. Boy, were we ever glad we took her advice. The quaint little village is nestled into the base of the San Juan Mountains, and the majority of the unique shops are the original buildings built in the late 1800’s. 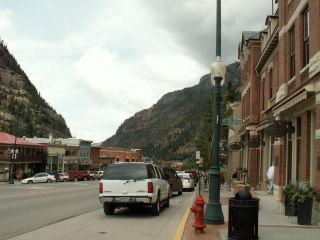 Keen and I treated ourselves to a night at the historic Beaumont Hotel in Ouray, and enjoyed a delicious meal in their fine restaurant. The next morning we were determined to try out some hot springs located underground in an actual cave. I know why they refer to it as a natural sauna!

From there we followed our noses and landed in Salida for one of the many highlights of our trip – whitewater rafting down Brown’s Canyon on the Arkansas River. Neither of us had ever been whitewater rafting before, so we were really looking forward to it, although I must admit to feeling a bit of trepidation. Our guide, Ted (from Canyon Marine), and a former guide, Brandi, were the only other passengers on our raft. Although it was a level three trip, which is considered moderate in difficulty, it had plenty of excitement and adventure for this Kansas girl. With rapids bearing the names of “The Widowmaker” and “The Toilet Bowl,” I was just thankful to get through it without capsizing! 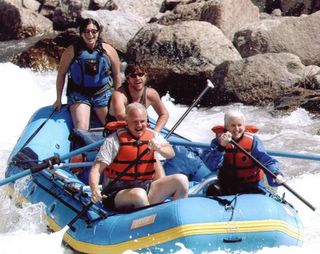 Whitewater rafting down Brown's Canyon on the Arkansas River

Before leaving the area, we checked out a resort called Mt. Princeton, which is located between Salida and Buena Vista near San Isabel National Forest. They have several hot springs pools, along with a beautiful mountain stream running through the property. They also have horseback riding, hiking, biking and rafting available in the immediate area. We spent about an hour and a half taking pictures of the premises so we could present it to my family as a possible location for a future Van Kirk family reunion. Since Keen and I haven’t sponsored the reunion in over ten years, I’d say it’s high time we step up to the plate and take our turn. (And I’m quite sure my siblings agree!) I don’t think we can go wrong with the beauty of the mountains and all the diverse activities Colorado has to offer. The magnificence of God’s creation is truly a wonder to behold. 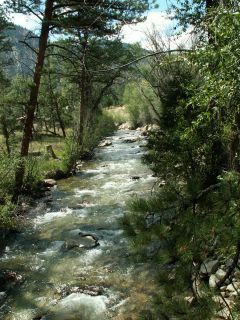 After spending our last night in Limon, Colorado, it was time to make our final trek to “Sweet Home, Alma, Kansas.”

The concept of vacationing is somewhat new to us since we were only able to take two full weeks off in the eighteen years we owned the trash business, but we definitely learned about the numerous benefits of rest and relaxation during this past week. It’s invigorating to change your environment and explore a new part of this beautiful country we are blessed to call home.

“[T]he traveler who has once been from home is wiser than he who has never left his own doorstep . . . .” ~ Margaret Mead