"Before I formed you in the womb I knew you; before you were born I sanctified you…"
~ Jeremiah 1:5 (NKJV)
When a woman is pregnant, she is said to be “expecting.” But sometimes babies are “unexpected.” Someone once said that the definition of “planned parenthood” is that you find out you’re pregnant and start planning for it.

That’s what happened with Keen and me. When we got married, we decided we wanted to wait a couple of years before we had kids. But God had other plans. Our firstborn son, Jared Joseph, arrived right on his due date – May 10, 1979 – exactly 11 months to the day after our wedding day. Keen always says, “Yes, the math works out.” But even when the math doesn’t work out, it’s still a miracle. In fact, some of God’s greatest blessings are unexpected miracles.

Kenny Chesney recently came out with a beautiful song titled, There goes my Life. The video version depicts a high school football player who just learned that his girlfriend is pregnant.

All he could see were his dreams
goin’ up in smoke
So much for ditching this town
and hangin’ out on the Coast
oh well...those plans are long gone

Couple years of up all night
and a few thousand diapers later
That mistake he thought he made
covers up the refrigerator
Oh yeah, he loves that little girl…

The next scene shows the little girl all grown up and going off to college. “And he said - there goes my life… my future… my everything.” What a touching example of how life’s detours can lead us on a most wonderful journey.

I recently purchased a book by Kimberlee Stone titled, I’ve Got a Secret: A Mother’s True Story of Healing and Forgiveness. The author candidly shares the personal story of her past abortion in hopes of helping other women overcome their shame and guilt and find healing through God’s total forgiveness.

So much growth and beauty could be achieved if we would only accept responsibilities and face difficult situations head on, no matter how difficult or embarrassing they might be. A woman who is dealing with an unexpected pregnancy could choose to keep the baby or give it up for adoption. Either way, she would be giving her precious baby a chance at life.

There are no easy answers to the abortion question in our country. Anti-abortion activists like Eric Rudolph and Paul Hill seem to think the solution is to murder abortion doctors or bomb abortion clinics. That’s obviously not the answer!

I am personally opposed to all abortions – but especially late term abortions. To perform that horrendous “procedure” on a full term baby is nothing short of murder in my view.

But whether you agree with a woman’s right to choose or not, the fact of the matter is, abortion is legal in our country. As much as I hate to admit it, even if we succeeded in overturning the law, I’m afraid it wouldn’t stop women from having abortions any more than the prohibition movement stopped people from drinking alcohol.

So what is the answer? I think the answer lies in changing people’s hearts and trying to help them see a better way. Wouldn’t it be wonderful if we could match up couples longing to have a baby with the women who weren’t ready or able to care for their babies at this time in their lives? So many couples have empty arms just yearning to be filled, but their only choice is to remain on long waiting lists or travel overseas to adopt a baby. What an incredible gift that woman would be giving to an infertile couple – not to mention the gift of life she would be giving her own unborn child.

This is a poem I wrote based on an actual conversation I had with our youngest son, Kirk several years ago.
We mourn

One day my young son,
asked me to explain
A word he’d heard before
but didn’t understand
“Sure, honey,” I said,
without giving it a thought
“What word is that?”
Then my jaw just dropped

“Abortion,” he said
in all his innocence
I cringed when he said it
And then I felt quite tense

But I had to tell him how
A little life is destroyed,
Because it’s a sad fact,
That we cannot avoid

With wisdom beyond his years
He turned and said to me
“Mom, I feel so sorry,
For that little baby.

“Because we only get,
One chance to be born.”
Yes, that’s sad, but true, my son
And after that, we mourn.
We had an unexpected miracle in our family four years ago…he calls me Grandma. 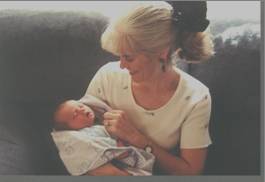 Posted by Eileen Umbehr at 1:05 PM