The Best for Last

"Ask, and it will be given you; seek, and you will find; knock, and it will be opened to you. For every one who asks receives, and he who seeks finds, and to him who knocks it will be opened.” ~ Matthew 7: 7,8 (RSV)
My brother said that I was rotten to the core
I was the youngest child so I got by with more
I guess she was tired by the time I came along
She'd laugh until she cried, I could do no wrong

This week I’d like to write about my brother, Bob, who will be celebrating his 39th birthday on February 13th.

Bob was “the baby” in our family – the youngest of nine. While the rest of us seemed to arrive in two year intervals, Bob came along a full five years after child number eight.

God must have saved the best for last because Bob has been an answer to prayer from the day he was born. Our sister Connie tells the story about how she prayed fervently for another brother or sister. Then one day Mom gave Connie a note to give to her teacher explaining that she would not be able to attend a parent-teacher conference because she was “infanticipating.” I guess Mom was trying to disguise the news, but Connie figured it out. “Infant + anticipating…..Hmmmm. I’ve got it! Mom’s having another baby!”

We all adored Bob – and still do. I can honestly say that none of us ever thought he was “rotten to the core” – although I do recall thinking he got away with more. When Bob was just a teenager, he used to engage in heated debates with our dad and it sounded an awful lot like “backtalk” to the rest of us! We were pretty convinced that we would have been escorted to our rooms if we had used that tone of voice with our dad!

When Bob was just a baby, he came down with pneumonia and almost died. I still remember seeing his little body lying in that big old hospital bed underneath an oxygen tent. But thank God, our prayers were answered when Bob pulled through. Bob would survive several other close calls throughout his lifetime, including a ruptured appendix and a fall from a high dive.

We all thought Bob was the most adorable baby that ever lived (until we grew up and had children of our own, of course!) – and we enjoyed the cute and funny things he would say and do.

When he was about three years old, our oldest sister Peggy went off to college and Bob went with my parents to help her move into the dorm. A short time later, Mom took Bob to visit a pre-school. After they returned home, Mom asked him how he liked it and Bob’s eyes immediately welled up with tears. “I don't want to go to collitch! I want to stay right here with you, Mom!"

I remember how Bob used to call our brother Bill, “Bully.” One day when Mom was vacuuming, Bob came running down the hall, crying hysterically. “Mom! Bully threw a block at me!” “Ahhhhh…..Where did he hit you?” Mom asked as comforted him. “He missed me!”

Bob was such a good kid growing up – and a hard worker, too. When he was only eleven years old he had a paper route and he used to get up at five o’clock in the morning to brave the snow and cold of a Minnesota winter.

Bob married his college sweetheart, Christine and together they have three adorable children of their own; Caitlyn, Connor & Ryan. 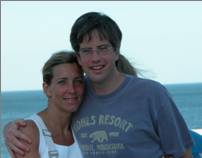 Caitlyn, Connor & Ryan
About four years after Bob graduated from law school, Keen and I were embroiled in a legal battle with the Wabaunsee County Commissioners. Bob was once again an answer to prayer when he offered to assist in our free speech case. However, when I told our attorney about Bob’s offer, his response was rather cynical. “Everyone has a lawyer in the family who thinks he’s an expert,” he said. But in this case, it happened to be true.

When our lawsuit reached the 10th Circuit Court of Appeals in Denver, Bob successfully argued the merits of our case before the three-judge panel. He wouldn’t even let us pay for his hotel or airfare. “Just consider it my contribution to the cause of freedom,” he said. “Honest to God, Eileen, I believe in this case.”

After the Wabaunsee County Commissioners appealed that ruling to the U.S. Supreme Court, no one was more surprised than us to learn that they decided to accept our case. Out of 8,000 requests that year, only about 80 cases were granted a hearing. I still remember the day Bob called to tell us, “We’re goin’ to the show!”

Sometime later we received a tempting proposal from one of the largest law firms in the world, Jones and Day. They offered to represent us free of charge at the U.S. Supreme Court. When we asked Bob what we should do, he replied, “You should give it some serious consideration, because they’re a very reputable firm and they’ll probably assign about ten lawyers to the case. The offer itself represents about $100,000 in legal fees,” he explained. “But make no mistake about it – I would dearly love to be the one to represent you at the Supreme Court.”

After much prayerful consideration, Keen and I decided to “dance with the one that brought us.” And were we ever glad we did! On November 28, 1995, several members of our extended family witnessed Bob skillfully respond to the questions the justices asked him in rapid fire succession. 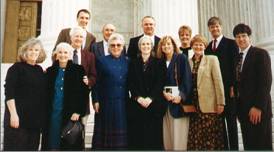 Seven months later to the day, on June 28, 1996, Bob called to deliver the news we’d waited so long to hear. “We won!” Keen and I were screaming and jumping up and down and thanking God. It was such a great victory, not only for Bob and for us, but also for “the cause of freedom.”

I can’t close this column about my brother Bob without mentioning his incredible sense of humor. For example, when I emailed him to ask about his various brushes with death, he provided the info and then added:

“That’s about it for near-death experiences except that I once had a very nasty hangnail and another time stubbed my toe real bad. Blew up the size of a balloon. Speaking of which, don't forget my crash in shorts on Keen's dirt bike and the attractive welts that accompanied that fall. I still have the shape of a muffler imprinted on my inner thigh.”

After Bob provided the specific details on his educational achievements, he wrote: “I also won the 6th grade spelling bee and played King George in the 5th grade class play. I think my first grade teacher gave me a double smiley face as well for sandbox etiquette, in case anyone is interested.”

Happy Birthday, baby brother. We love you.
Posted by Eileen Umbehr at 11:38 AM