By now some of you may be wondering how my book project is coming along and when I might be returning to Kansas. So I’ve decided to devote this article to filling you in on what’s been happening in my life since I embarked on my journey.

I landed in Nevada on October 31st, just in time to drive to the Governor’s Mansion to watch my niece, Chloe Eileen perform an Irish dance for the Nevada Day celebration. Governor Kenny Guinn was on the grounds handing out candy to the trick or treaters and I was lucky enough to get my picture taken with him. The snow was falling and the governor’s mansion was beautifully decorated for the occasion – like something out of a movie. It was a very exciting way to start off my time in Nevada.

Another memorable event happened one night when my sister, Mary and several of her friends and I went out to dinner at a local casino. Afterwards, we listened to a singer by the name of Stew Stewart who has performed with many famous artists like Johnny Cash, Tammy Wynette and Garth Brooks. Mary heard him sing before when he came to one of the nursing homes where she works.

Stew Stewart is quite a character. He likes to pull people out of the crowd and have them sing into the microphone. When he came around to me, I gladly chimed in because I love to sing. During one of the breaks, I decided to ask him if I could sing my favorite song – “She’s in love with the boy,” by Trisha Yearwood. I told him that I sang it at my son’s wedding, so he decided to take a chance on me. I thought I’d died and gone to heaven when he called me up on stage and let me sing with the band. But the real highlight came after I sat down and Stew called my name again from the stage. 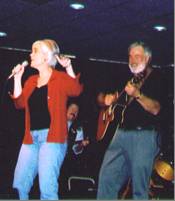 “I’ve never done this before in nearly thirty years of performing, but Eileen, can you come back again tomorrow night?” Are you kidding? Of course I can come back!

After arriving in Nevada, I found a comfortable apartment nestled into the picturesque Sierra-Nevada Mountains. I’ve enjoyed many long walks on the mountain trails behind my place. My neighbors are all friendly, working adults, so it’s been very peaceful and quiet, too.

My sister, Mary has been my right arm since I’ve been here. She helped me find the apartment, furnish it and get the utilities set up. She’s been my personal chauffer, taking me to the grocery store and Wal Mart and anywhere else I needed to go. She’s been my nurse and my number one cheerleader. Most of all, she’s been my friend. I honestly don’t know what I would have done without her. Whenever I tell her that it seems like she’s doing too much for me, she always says, “I have to take care of you. It’s my job.” I guess some things never change.

As for the book, it’s almost finished – which is why I’m “almost home.” I didn’t plan to return until May 1st, but I’m too homesick to wait that long. So I’ll be flying home during spring break – just one week after the 30th anniversary of our first date (March 15, 1974).

Several years ago I sent a letter of inquiry to a literary agent in New York and she wrote back and said that she definitely thought there was a book in our story. However, I’ve always wanted to write the “behind-the-scenes” version of our story based on my personal journals, and she didn’t think that was where the “larger drama” was. She wrote in part: “I feel the book you should be writing is a narrative non-fiction account by you and your husband (largely from his point of view) of the entire struggle up through the Supreme Court. The book should detail the local corruption that your husband fought as a journalist himself and in his daily business, include the columns he wrote, as well as your navigation of the justice system” She concluded her letter with these words, “The story is an inspiration. Your faith in your fundamental rights reinforces confidence in the human spirit and in a country where every voice has a right to be heard.”

You would think that I would have been pretty encouraged by that letter – and I was. But not encouraged enough to change the way I envisioned writing our story. In my letter of response I said: “This is not just a story about our Supreme Court case; it is a story about our faith in God, our love for each other, and how both saw us through our darkest hour.”

So when I arrived in Nevada with my journals in hand (all 800 pages of them), I was fully prepared to write my own version of our story. But much to my surprise, the book seemed to take on a life of its own and headed in a completely different direction. I soon discovered that there was far too much information for me to write the basic story and include the personal side at the same time. So I essentially abandoned my journals (temporarily, at least), and focused primarily on “the corruption he faced, the columns he wrote and our navigation of the justice system.”

If I were to compare my book to a movie, I would have to say that it’s turned out to be more of a documentary. It’s a historical account based on court transcripts, legal filings, letters from lawyers, newspaper articles and personal recollections detailing exactly what conflicts arose from the time Keen was awarded the trash collection contract back in 1981 up through the U.S. Supreme Court decision in 1996.

After I get settled in back at home, there are a few people I’ll need to interview. Then I’ll start in on the task of verifying my facts and editing the rough draft.

Someone once said that there is no good writing – only good rewriting. The following quote seems to sum it up quite well.

“Writing is not like painting where you add. It is not what you put on the canvas that the reader sees. Writing is more like a sculpture where you remove, you eliminate in order to make the work visible.”
~ Elie Wiesel, 1986 Nobel Peace Prize laureate, 1988

My next step will be trying to find a publisher. I plan to contact the agent in New York to see if she still has any interest in our story. If not, I’ll have to pursue other avenues, including self-publishing. But whether 10 people read it or 10,000 – this was something I had to do. We spent fifteen years of our lives (off and on) engaged in some sort of battle with the county commissioners. This is the history of our life and, with the help of God, I will see it in print one day.

As for my family, they have survived pretty well in my absence. I so appreciate all the sacrifices they made to help me make this dream a reality. Keen has been the “go-to-guy” while I’ve been away. He’s such a great dad, I’m grateful that the boys have someone they can turn to whenever a problem arises. This has been a real time of bonding for them, too, which has been an added bonus.

Someone asked Keen if he was keeping the house clean and his response was: “Clean enough.” He does all the grocery shopping and bill paying, and he and Kirk have become experts at laundry and ironing. Keen said that Kirk jumps up when he hears the dryer stop because he wants to get his clothes out before they get all wrinkled. And Kirk told me that he’s actually enjoyed the feeling of independence. He said, “If I need something for school, I throw in a load of laundry; if I have homework, I do it; and when I’m hungry, I eat. It’s helped get me ready for…you know…when I’m grown up.” Kirk has kept busy with basketball season and has continued to get A’s and B’s in school. I’m really proud him.

Of course, the hardest part has been being away from those I love. I’ve missed everyone terribly and they’ve missed me. I guess absence really does make the heart grow fonder. Keen’s love letters have helped a lot, but its still been very difficult to be apart. Needless to say, we’re all looking forward to being reunited in a few short weeks.

“Home to You” ~ recorded by John Michael Montgomery

I’d like to close by sharing a few more excerpts from some of Keen’s love letters.


Dear Eileen,
It’s 10:30 p.m. Friday night – I can’t read any more. I must write you – express my love for you. Just thinking of you makes me happy. Being apart makes me focus on the many ways I love you. I’ll never take for granted the opportunity to be with you – stand next to you – to make your happiness my only pursuit. It is so cool to be married to you!

You are on a path that seems imprudent to some, foolish to others; but to me – you are heroic, courageous and full of life’s passion. I know at times, it must be hard, but push on – as I will also – and we’ll meet at the finish line. Honey, we are on the eve of the rest of our life. It is so exciting! We are embarking on a journey – the destination – God only knows.

Eileen, you are the strength in my muscles – the spark in my life. You are the music that plays in the soul of my being from sunrise to sunset.