Now he walks in quiet solitude, the forest and the streams
Seeking grace in every step he takes
His sight has turned inside himself to try and understand
The serenity of a clear blue mountain lake

And the Colorado Rocky Mountain high
I've seen it rainin' fire in the sky
You can talk to God and listen to the casual reply
Rocky Mountain High, Colorado

To pick up where I left off last week, we finally made it back to our cabin – soaking wet from rain on the outside, and soaking wet from sweat on the inside. From there, we went directly to the natural hot springs located on the grounds of Mt. Princeton Hot Springs Resort. It was so refreshing to soak in a 95 degree pool when the outdoor temperatures were so cold. Keen even found some parts of Chalk Creek that were actually too hot. As a bonus, we met a delightful couple (George and Mary Beth) who shared a wealth of information about the area, including the proper (local) pronunciation of Buena Vista (like the name Beulah), and a more direct route from the airport.

After checking out of Mt. Princeton, we met with their event coordinator, Zelma, to work out the details for next year’s family reunion. As it turned out, Zelma has relatives from the Eskridge area as well as a good friend from Alma. It really is a small world.

Next we headed for Buena Vista for The Liar’s Lodge, a bed and breakfast where we made arrangements to stay for the remainder of the week. It’s a beautiful spot on the outskirts of town located right on the shores of the Arkansas River. A plaque on the wall explained the origin of the name: “Fisherman, hunters, and other liars gather here.”

We hit the sack early that night, and the next morning we were greeted by the breathtaking sight of an early snowfall. 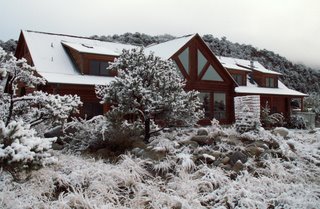 So we bundled up and headed out on a pre-dawn walk. The two dogs, Stubbs (a lab), and Dakota (a Siberian Husky), followed us into town. On our way back we noticed that Dakota was lagging behind, so we had to keep stopping until he caught up. When we returned, the innkeeper, Mark, was anxiously waiting on the front porch. “Have you seen a white dog?” he asked, with a hint of panic in his voice. We explained that both dogs followed us into town and we didn’t know how to make them stay. Then we found out why Dakota was huffing and puffing so much on the way back – because he is 12 years old! Mark jokingly remarked, “You broke my dog!” Then he added, “Don’t worry – the exercise was good for him,” and Keen and I both breathed a huge sigh of relief.

Later that day, Keen decided he wanted to hike and bike on the Barbara Whipple Trail located directly behind the lodge. 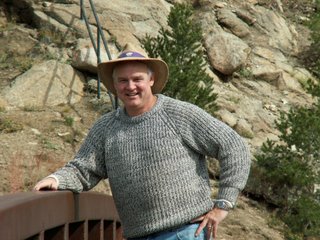 Barbara Whipple (1920-1989), was an artist, hiker, skier, and lover of the outdoors who owned an art gallery on Main Street in Buena Vista. She was well known for her woodcuts and etchings.

I decided to stay back to catch up on some laundry (and rest). Keen ended up pushing his bicycle all the way up the trail, and he had a precarious ride back down. Needless to say, he was exhausted when he returned. 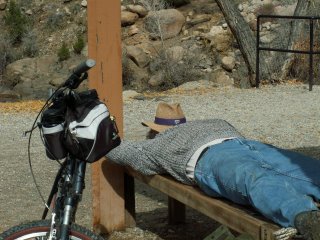 But that afternoon I was surprised when Keen suggested we go on another hike. He said, “I’m just giddy – I don’t want to waste a minute.” So we set out in search of a trail known as Agnes Vaille Falls. Agnes Vaille was born in 1890 to a prominent Denver family. She led an adventurous life, joining the American Red Cross in France during World War I. Upon her return, she became the Secretary of the Denver Chamber of Commerce. She had a true passion for hiking and mountain climbing, but sadly, this passion ultimately led to her death when she slipped on some ice and fell down Longs Peak in Rocky Mountain National Park. It is told that she survived the fall but froze to death before help could arrive.

The trail was absolutely gorgeous, leading to a remarkable water fall. But it wasn’t enough for Keen to see part of the waterfall; he insisted that we continue our ascent until we found the origin of the waterfall. 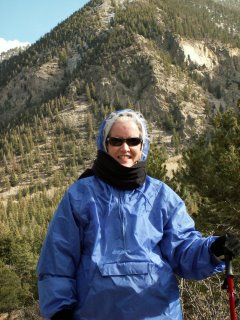 I must admit, it was worth it, even though I almost slipped on some wet, moss-covered rocks in an attempt to capture that perfect picture with the waterfall in the background. 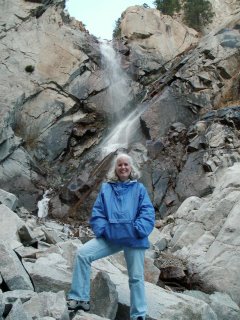 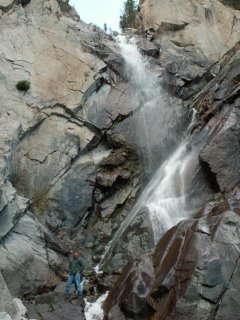 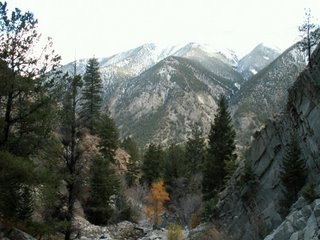 It struck me that Agnes Vaille, as well as my sister Patricia and so many others such as Steve Irwin, the Crocodile Hunter, have lost their lives while pursuing their passions. That seemed so tragic to me, but Keen felt differently. He said he couldn’t think of a better way to die than to be doing something you loved.

Afterwards, Keen and I both agreed that we had discovered the perfect spot for the 1st annual Patricia Van Kirk Memorial Hike – a tradition we plan to start and hope to continue each year as a way of remembering/honoring our late sister and her love of life and the great outdoors.

Next we took a side trip through the historic Colorado Midland Railroad tunnels which were carved right out of the mountains near our lodge. 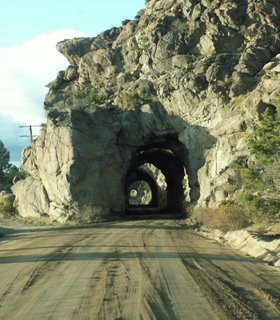 The Colorado Midland started in Colorado Springs and arrived in the Buena Vista area in 1887. Passengers were taken to the station by horse-drawn wagon.

On our way back we spotted about a dozen deer along the railroad tracks. 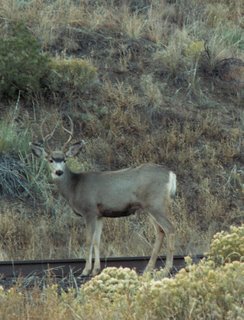 After a while, deer sightings almost became commonplace. One day we saw some deer cross the street right in the middle of town, and another time we spotted a family of three in someone’s front yard and we nearly mistook them for statues!

The next day we took a two-hour road trip to the Great Sand Dunes National Park and Preserve near Mosca, Colorado. 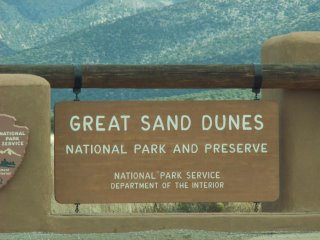 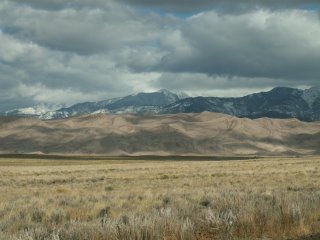 I was able to capture a few pictures before we entered the park, but when I tried to take a picture of Keen standing on the sandy dunes, my digital camera flashed a message informing me that my card of pictures was full. I was so disappointed until I realized that the message was proof that my camera had indeed been working properly all that time, despite the fact that I had dropped it on the sidewalk on the first day of our vacation. After touring an alligator farm on our way home, we stopped at Wal-Mart and bought another card to store pictures from the remainder of our trip.

By the time we got back to the lodge, I was ready to call it a day, but Keen convinced me that we still had time to hike up the Barbara Whipple Trail before sundown. So off we went, and I’m so glad we did. The hike was exhilarating and the view was spectacular. 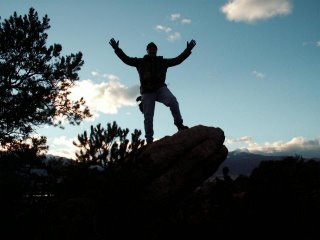 We finished up our hike just as the sun was setting behind the mountains, and Keen commented about how glad he was that we hadn’t wasted a minute of our day. “I guess it’s never too late to follow your heart,” I replied.

The next day we checked out of the Liar’s Lodge and returned to Mt. Princeton to meet with our event coordinator, Zelma. Zelma greeted us with a massive amount of information including price lists, brochures from area recreational spots, as well as an impressive type-written document containing answers to all of our many questions. As a result of all of Zelma’s hard work, I’m happy to report that the Van Kirk clan will indeed be invading Mt. Princeton Hot Springs Resort next summer. We are really looking forward to it.

After our meeting with Zelma, we drove to the old ghost town of St. Elmo, which was built in 1878 and is located about 10 miles up the road from Mt. Princeton. While we were there, we walked around the historic Iron City Cemetery. The sign posted at the entryway listed the names of many of the people buried there, along with information about how some of them met their untimely demise. 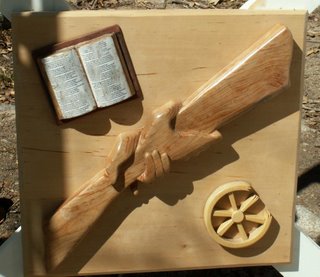 Sadly, many of the graves were for small children. One gravestone erected in 1891 was for two sisters named Sadie and Gertie. It read: “Born 2 year[s] apart; Died a day apart; Buried a hand apart.” 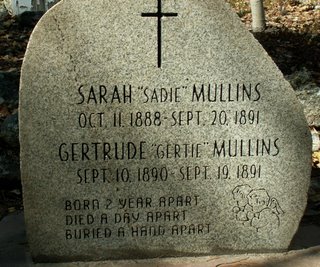 When it came time to make the long trek back to Kansas, Keen and I were both ready to leave Colorado behind for the time being. As reported in the Fall 2006 edition of the Kansas Traveler, the internet web site Yahoo.com named the Kansas Flint Hills as No. 5 on their list of the top 10 travel destinations in the United States.

But then, we didn’t need them to tell us that there’s no place like home.

"People travel to wonder at the height of the mountains, at the huge waves of the seas, at the long course of the rivers, at the vast compass of the ocean, at the circular motion of the stars, and yet they pass by themselves without wondering." ~St. Augustine
Posted by Eileen Umbehr at 2:55 PM