Absorbed by Love (Part I)

“Beloved, let us love one another, for love is of God; and everyone who loves is born of God and knows God. He who does not love does not know God, for God is love. In this the love of God was manifested toward us, that God has sent His only begotten Son into the world, that we might live through Him. In this is love, not that we loved God, but that He loved us and sent His Son to be the propitiation for our sins. Beloved, if God so loved us, we also ought to love one another.” ~I John 4:7-11

Recently I met a woman who has a seventeen-year-old daughter with Down syndrome. Her daughter seemed amazingly well-adjusted and functional. I told her about our granddaughter, Katelyn, and asked if she had any thoughts or advice she could share.

Her first piece of advice was to say that all the available resources are wonderful, but, as Katelyn’s parents, Josh and Lisa will be the best teachers she ever has because they’re with her all the time. She explained that while her daughter’s IQ is not very high, she is able to manage very well in life, and performs many day-to-day activities. I took particular interest in her next comment: she said that her daughter has an incredible memory when it comes to matters of the heart – that is, experiences or people that touched her heart.

Next, she told me that there is a waiting list to adopt children with Down syndrome. That is sadly due to the fact that so many children who are diagnosed before birth are being aborted. She said, “People look at them as though they’re not right, but the truth is that there’s more right about them than most people.”

Lastly, she said, “Tell your son and daughter-in-law not to be afraid to have more children. I have seven children in all; four born before her, and two after her.” (A friend of ours is the youngest of eight children, and he has an older brother with Down syndrome.)

At the end of our conversation, my new friend gave me a hug. Then I asked if I could give her precious little daughter a hug. She said yes, and once again I felt as though I’d been touched by an angel.

Shortly after Katelyn was born, I was trying to describe her to my sister Peggy. “There’s just something so special about Katelyn,” I said. “When you’re around her, she just draws you in. It’s like she absorbs you.” I think that’s what makes children with Down syndrome so special; they are all love, all purity, all innocence – they are, so to speak, completely complete. 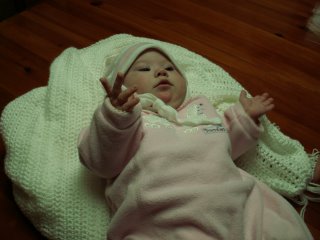 Katelyn all bundled up

After writing my column about Katelyn titled Angel in Disguise, I received numerous encouraging comments. This first story was sent to me from our friend Larry Perry, who gave me permission to share it with you:

What a beautiful story. Thank you for sharing it.

I remember when our youngest son was born. There was another baby born that same evening with Down syndrome. I remember the father of the baby with Downs standing by me looking in the window to the nursery and crying. I talked with him a few minutes and discovered the situation. I explained to him that he was one of the most fortunate men on earth and he suddenly stopped and listened. I told him that God only gives challenged children to special parents who are strong and who can help them and that obviously he was one of God's chosen parents and would experience a very special kind of love over his life. That he and his wife were in for a very, very special life with their newborn child. Oh, there would be ups and downs, but there are with all parents. However, their child would show them a kind of love that most people never experience. Many people would envy him and his wife because of this special event. He seemed relieved and began to think about it. I patted him on the shoulders and asked him to give his wife a big hug and our congratulations for a beautiful baby. He left and I never saw him again at the hospital.

I did not get his name nor address and as time would go by had forgotten the incident. Then about fifteen years later, I was doing a photographic workshop/seminar in Minnesota on wildlife. There were about 6 or 7 students in the workshop. After a couple of days, one of the students asked to speak to me alone. He asked if I had a son from Knoxville that would be so many years old. Somewhat surprised, I told him I did. He then told me he was the father of the child with Downs that was born the same time and that he and his family lived down in Tuscaloosa, Alabama and were very happy. He further told me that he had thought about what I said to him that day at the hospital many, many times – about being a special parent and that over the years he agreed that his child with Down syndrome made their family the happiest in the area. Oh, there were special needs, but he and his wife absolutely loved doing them. He also mentioned that they had two other children who were normal and who were very supportive of their special angel. After hearing his story and the chance meeting of him 15 years later, when I got back to the motel that night, I just thanked God that He had put those words in my mouth 15 years earlier and that He protected the baby and blessed his parents. What a great day that was for me!

Eileen and Keen, I know you will be blessed the same way as I can already see it in your writing and your photos. Congratulations, and now you too will see a kind of love that very, very few people on earth ever experience. That means that you too are very special people.

“God gives us situations, challenges, tests so that we can expand to encompass them and render them harmless, and we grow because of it.” ~ Duane Herrmann

This next story came from another friend of ours, Jack Casner, who also gave me permission to share it with you:

When I was seven years old I used to spend weekends with my father, in Severy, Kansas. There I met a man named Walter Palmer. Walter was about 40 years old and he had Down syndrome. I didn't know anybody else in town and the two of us became friends. He showed me some good fishing holes and some beautiful rural areas close to Severy.

Walter was my best buddy in Severy until my dad died. None of the kids I met there were nearly as smart as Walter, or as friendly, or as good to be with as Walter.

My high school buddy Scott, who has given me blanket permission to share anything he writes, sent the following encouraging words:

When I read your words about Katelyn, I remembered something from "Fried Green Tomatoes." When Ninny Threadgoode told Evelyn about her son, Albert, who was born with mental challenges, she said this, "How could anyone believe that little baby could be a burden? He was God's greatest gift. Why, I think there never was a purer soul on this earth. I had him with me until he was 40 and then he went to sleep and didn't wake up. Sometimes I can't wait to get to heaven to see him again."

I have known many people with children born with various challenges, and what I've heard from all of them is that they are blessed everyday by these wonderful children. I pray this will be so for Josh and Lisa. 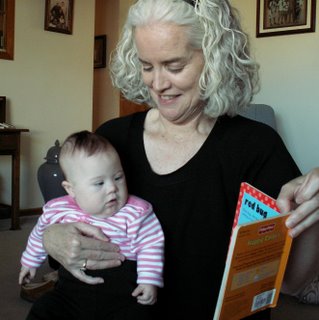 GramE and Katelyn reading a book 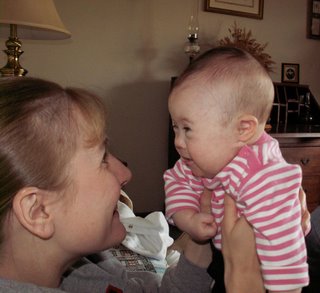 All smiles from Katelyn and Mommy 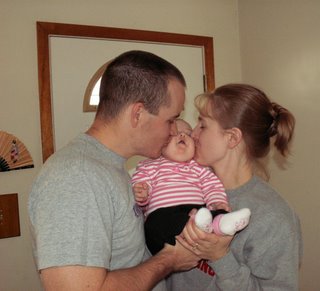 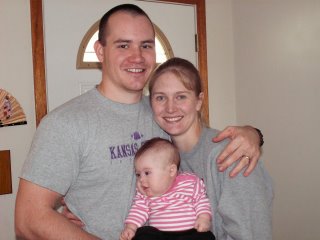 Josh, Lisa & Katelyn
Posted by Eileen Umbehr at 9:46 AM