Now, I’m not ready to admit to being “aged” just yet, but I will gladly admit that having grandchildren is one of the most rewarding experiences of middle age.

After Katelyn was born, our grandson Asher astutely noted that our family was “equal” now, with two grandsons and two granddaughters. But the fact that Keen and I now have as many grandchildren as we have children was a little piece of trivia that hadn’t hit me until recently. It’s just amazing to think that we have doubled our numbers – and then some, if you include our two daughters-in-law!

The weekend before last I had the joy of flying to Mississippi to help Asher and Gabe celebrate their 7th and 4th birthdays. They are born exactly three years and four days apart, so Jared and Erin threw them a joint party at a local bowling alley – complete with pizza, cake and plenty of tokens for the adjacent arcade. 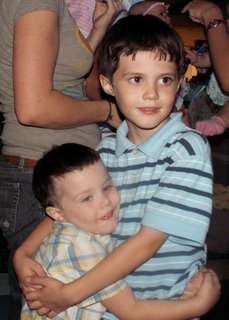 The trip also gave me a chance to get my hands on my precious little namesake, Emma Eileen. (Her first name came from Erin’s maternal great-grandmother.) Emma looked like a living doll in her frilly party dress, headband, and pink shoes. 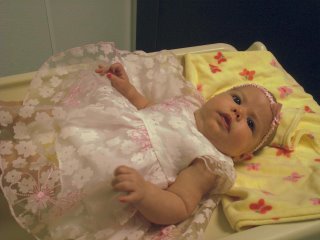 Emma in her party dress

She is growing like a weed and has a great disposition. Jared said Emma thinks her name is “beautiful” because he tells her that all the time, and she just grins from ear to ear. Jared’s favorite outfit to put her in is one that bears the words, “Daddy’s little princess.” But Erin has filled Emma’s closet with many more outfits declaring that her heart belongs to Mommy. Of course, Emma is adored by both of her parents and two big brothers – as well as her grandparents and lots of aunts and uncles from both sides. 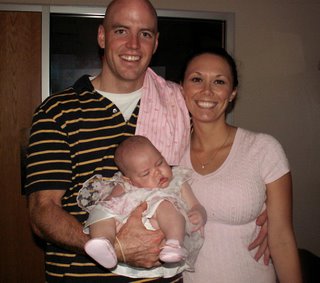 During my last visit with the grandkids back in May, I wrote down a few funny things that happened. (Have you noticed that things always seem funnier to the grandparents?) One time Gabe was all upset because the clothes I picked out for him “didn’t match.” Another time he was in tears because Rocky the Labrador was eating his toy penguin. So I bravely rescued the penguin from certain demise, only to have Gabe lose the little creature in the toilet a few minutes later. Another time Asher and Gabe were playing on the couch when they suffered a brutal head on collision – with each other – and they both blamed the other one while they held their foreheads and cried.

One day Gabe came into the room asking me to help him with an unusual problem. For some unknown reason, he had taped one of his eyelids shut with a Spiderman Band-Aid. When I asked him why he did that, he replied, “Because I say so.” So I extricated the Band-Aid from his eye ever so delicately, trying to preserve as many eyelashes as possible in the process. A short time later, I noticed that Gabriel had transferred the Spiderman Bandaid to his nose. And I don’t mean over the bridge of his nose. No, he placed it directly across his two nostrils, causing him to have a nasal-sounding voice. It cracked me up so much that I decided to take some video of him. As I started taping, I couldn’t keep from laughing. “That’s not punny, Gramma,” he said, with a hint of indignation. “What’s not funny?” I asked. “It’s not punny in my unner-wear.” Now I was really having a hard time holding back. “Oh, I’m not laughing at your underwear, Gabe, I’m laughing at the Band-aid on your nose.” “That’s not punny.” (In other words, “refer to my previous answer, Gramma!”) On the contrary, it was very funny! We’ve had more laughs over that. Keen even has an 8x10 picture of Gabe in his law office with the Band-aid on his nose. (It looks like a mug shot.) 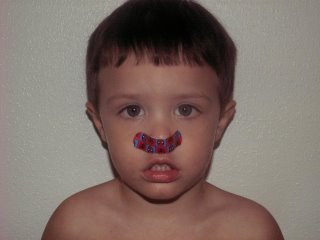 As you can see, Gabriel makes the “p” sound in place of an “f.” So while I was there I would try to correct him. One time he told me that some jean shorts didn’t “pit” him. So I said, “fit, fit.” And he promptly repeated, “pit, pit.”

Asher is the more laid back of the two, and he has a very analytical mind. He actually understands the complicated strategies involved in playing his two favorite games, Pokeman and Yugioh. He also loves playing video games. Erin said that they were at the park recently when Asher met a little girl who had some Pokeman cards. “You know,” he proudly announced, “I’m the King of Games.” We laughed so hard over that. “Your search is over, young lady. I am he.”

One day Asher said: “Grandma, I can spell ‘see.’ S-e-e.” Then he added, “It’s also a letter of the alphabet – “C” – and it’s also a word in Spanish that means yes. Am I right?” He has such a sharp little mind. He’s always saying things like, “I go to school for five days and then I’m home for two days.” Speaking of school, he’s getting all A’s and he almost always has “green days” for good behavior.

Gabe is a lot more rambunctious and aggressive. One time when he and I were shopping I made a comment that he disapproved of and he replied: “Daddy said to stop saying that.” Later, when we were at Target I saw a shirt that I thought would be perfect for him because it said, “I’m the boss.” So I showed it to Erin and hung it on the cart. Can you guess why I didn’t end up buying it? Because Gabe said he didn’t like it! (Case in point.) But that was back in May, and I must say that he’s mellowed out a lot just since then. In fact, when I arrived at the bowling alley a couple of weeks ago, Gabe was the first one to run up to me and give me a big hug. I thought he was never going to let go, which of course melted my heart and made me feel so loved.

Being grandparents is truly one of God’s greatest gifts and life’s greatest joys. It’s like the saying goes: “If we knew how much fun grandchildren were, we would have had them first!” 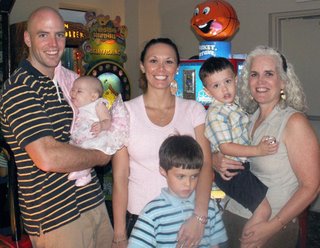