“For the Lord God helps me; therefore have I not been ashamed or confounded; therefore have I set my face like a flint, and I know that I shall not be put to shame. He is near Who declares me in the right; who will contend with me? Let us stand forth together. Who is my adversary? Let him come near to me. Behold, the Lord God will help me; who is he who will condemn me?” ~ Isaiah 50:4,7,9

One of America’s greatest heroes, Rosa Parks, was laid to rest this week. Surely she is in Heaven, strolling along those streets of gold and enjoying her just reward.

When Rosa Parks, a 42-year-old black seamstress, stood up for her fundamental right of equality by refusing to relinquish her seat on the bus to a white man, I seriously doubt that she ever imagined her actions would have such far-reaching effects. Besides the 13-month boycott of the bus service, blacks in Montgomery went on to wage a successful Supreme Court challenge to the Jim Crow law which treated them as second-class citizens. Today Rosa Parks is eulogized as the mother of the civil rights movement.

Due to my deep admiration for Rosa Parks, I decided that it would be worth the money to purchase the right to share this Associated Press photograph of her mug shot, which was taken on that fateful day nearly fifty years ago. I also obtained permission to post the picture on my blog/web page located at www.reflections-eileen.blogspot.com. 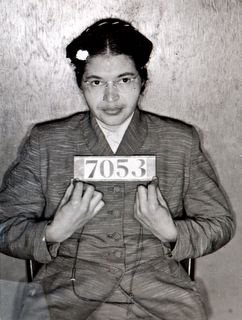 To me, this picture vividly illustrates the extreme price Rosa Parks paid for following her convictions. She was arrested, fingerprinted, and ultimately convicted and fined for violating the segregation laws. But Mrs. Parks believed that she had as much right as anyone else to take a seat on that bus. Come what may, she could not bear the injustice or humiliation one more day.

In Dr. Martin Luther King’s book, “Stride Toward Freedom,” he wrote, “Actually no one can understand the action of Mrs. Parks unless he realizes that eventually the cup of endurance runs over, and the human personality cries out, 'I can take it no longer.'”

There’s a similar situation being played out right now in Manhattan, Kansas. The Manhattan Mercury (www.themercury.com) has reported on it extensively. The case involves a convicted felon who served about six years in prison for an armed robbery he committed when he was a teenager. However, this individual is currently employed fulltime, married, and attempting to live a law-abiding life.

While some may question my comparison of the two cases, I firmly believe that there is little difference. To make a long story short, one day back in August this man was walking out of an area bank when he was approached by a sheriff’s deputy who demanded that he turn over the hat he was wearing. The hat bore the initials “RCPD” on the front (Riley County Police Department, Manhattan, Kansas), and had been given to him by his mother-in-law, who apparently received it as a gift from the widow of a former Riley County Commissioner. After being threatened with arrest, the man reluctantly forfeited his hat.

Although it is still unclear exactly why the deputy demanded the hat, I personally surmise that he felt there was something improper or sacrilegious about an ex-felon wearing an RCPD cap.

At any rate, six weeks later the man attended a meeting of the Law Board and requested the return of his hat. He also asked them to show him what authority they had to continue to withhold it. While no answer was forthcoming, the chairman of the Law Board did offer to pay him $20.00 for the hat. The gentleman declined because he didn’t want the twenty dollars, he wanted his hat back. (He has a collection of over 100 hats.)

According to published reports, it seems the Riley County Police Department was concerned that someone in the community might mistakenly identify this individual as a member of their department. But we have all seen people wearing NYPD or FBI apparel without restrictions. In fact, our son Kirk visited the FBI headquarters several years ago and purchased an FBI sweatshirt for our grandson, Asher.

The point I’m trying to make is that Rosa Parks had a constitutional right to refuse to give up her seat on that bus, and this individual had a constitutional right not to be forced to forfeit his personal property, regardless of his past mistakes. There are laws in society which restrain the citizenry, and there are laws contained in the Constitution which limit the activities of police officers and/or government officials. When a citizen breaks the law, for example, they are charged, prosecuted and punished severely – and rightfully so. Someone who is caught shoplifting cannot simply agree to return the stolen merchandise and expect that “all will be forgiven.” Even though the stolen item might only be worth $16.99, the criminal will spend much more than that in fines and legal fees, and he may even be forced to spend some time in jail. Truly, crime doesn’t pay.

In the Manhattan case, however, it was the police officer who stepped over the line and violated a citizen’s right. Although the hat has since been returned to its rightful owner, the issue of damages is still being determined. For those who think that a twenty dollar hat is worth exactly $20.00, I would argue that it is not the hat itself he must be compensated for, but rather the violation of his First Amendment right of free expression, his Fourth Amendment right to be free from unreasonable search and seizure, and his Fourteenth Amendment right not to be deprived of life, liberty or property without due process of law.

I remember when we were involved in litigation with the Wabaunsee County Commissioners, we had a meeting with our lawyers about this very subject. They wanted us to agree to settle the case for far less than we felt it was worth; they said that we were being unreasonable. We explained that our First Amendment rights were not for sale. It was like asking us to put a price on one of our children. Keen said, “Put yourself in our shoes. For example, what is it worth to you not to have the government violate your Fourth Amendment right by breaking into your home and rifling through your personal papers?”

Since we couldn’t agree with our lawyers on what a “reasonable” settlement amount would be, the case went forward and the rest, as they say, is history.

Yet, our decision to stand up for our right of free speech also came at a high price. Case in point: after we finally reached an out-of-court settlement, Keen was blamed for the increased insurance rates for Wabaunsee County. We felt the blame belonged to the commissioners who had abused their power by carrying out their personal vendetta against Keen. After all, it was their actions which were ruled unlawful by the United States Supreme Court.

“In some people’s eyes, standing up for your rights qualifies you as a troublemaker instead of as a person with strong principles and convictions.” ~ Keen A. Umbehr

Whenever my book gets published, it will show that it is only by the grace and mercy of God that we managed to survive every attack upon our business, including two sabotage attempts – one that would have caused damage to our truck when someone drained the oil out of it, and the other which could have caused serious physical harm to Keen when someone removed the lug nuts from the rear tire of his smaller trash truck. All I can say is: “There is a God.” That’s the only explanation for why we were not destroyed many times over.

"It must be considered that there is nothing more difficult to carry out or more doubtful of success, nor dangerous to handle, than to initiate a new order of things. For the reformer has enemies...and only lukewarm defenders." ~ The Prince by Niccolo Machiavelli

When right is wrong
And wrong is right
Do you run and hide,
Or embark on a fight?

If you run, you avoid
A prolonged struggle
No conflict, no worries
No lawyer bills to juggle.

But change doesn't happen
When your head's in the sand
It takes courage and commitment
To take a stand.

What would have happened
If Rosa Parks had backed down?
Would we all be equal,
Black, white & brown?

Sticking your neck out
Indeed, has its price
It is rarely popular
And involves sacrifice.

Your critics will be many
Your supporters few
But hold on to your dreams
And one day they'll come true.
Posted by Eileen Umbehr at 1:32 PM