You are my brother, you are my family
And it seems like only yesterday,
we were running wild and free
Down the corner buying candy,
or messin' 'round in the neighborhood
Hanging out with you night and day,
it was good, so good . . .

My Brother, My Brother ~ recorded by Aaron Neville

This week I’d like to write about my younger brother, Bill, who will be celebrating his 46th birthday on November 10th.

Bill and I are only sixteen months apart, even though we are the seventh and eighth children out of nine. I don’t know how our dear mother managed to keep her sanity having all those kids so close together. (Maybe she lost it by the time we were born, which would explain a lot.) At any rate, Bill and I go way back. 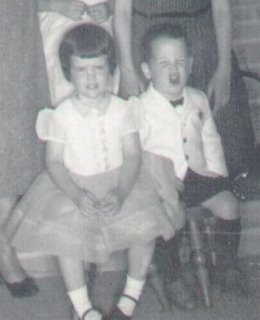 Rumor has it that I thought I was the boss of Bill from the time he was born. Mom said that when he started crawling, I followed him around everywhere he went. Poor kid. We even have a family picture with all of us kids lined up in a row. I was probably about two and Bill would have been about eight or nine months old. There we were at the end of the line, and I had my arm around Bill’s neck, holding him in a headlock.

It should come as no surprise that Bill and I fought like cats and dogs when we were younger. (And I mean that literally.) But thankfully, we grew up, and I’m happy to report that now he is one of my dearest friends.

Bill is the business head in our family, and he graciously shares his ideas and wisdom with anyone willing to listen. It doesn’t matter how busy he is with his own family and business, he always makes time for his siblings. In an earlier column, I shared an example of how we benefited from Bill’s insights. It was about the time we were trying to sell our business in 1998 so Keen could go to college, and the guy we offered it to never returned Keen’s calls. Well, Bill became absolutely indignant about that and practically chastised us for wasting our time. “Call one of those big trash companies!” he exclaimed. So we took his advice and by 5:00 that night Keen had received a return telephone call from Waste Management. Within three months we closed the deal and Keen enrolled at Kansas State.

Recently I made the mistake of telling Bill that I was in the process of having business cards made up for Keen’s new law practice. Well, let me tell you, he was all over that! (I guess the tables have turned and now he thinks he’s the boss of me!) To make a long story short, after it was all said and done, Bill had dragged me kicking and screaming into the latest “must have” for the business world: a web page and a domain name. He said, “The whole idea behind a business card is to include as much contact information as possible.” He convinced me that now was the time to implement these changes – even though I had neither the time nor the desire to cooperate.

Then a couple of weeks ago I was feeling anxious about my book and decided to send out a preliminary query letter to the agent in New York who had expressed interest in my project several years ago. I was just going to send a letter, but Bill thought I should send the manuscript with the letter. I kept trying to explain why I simply wanted to ask her if she was still interested, but he kept insisting that I should wait. In one of his many e-mails he wrote: “I am thinking that you should send this letter with the manuscript, not asking permission to send it. Don’t leave her room to say no. (Old salesman’s trick.)” Nevertheless, I stuck to my guns and put the freshly composed letter in the mailbox. When I returned to my computer, I found yet another email from Bill asking if I’d sent the letter yet! I was tempted to tell him to back off, but instead I conceded and retrieved the letter before the mailman arrived. What can I say? I had to reluctantly admit that I did have a very slight, nagging doubt about it, and since he’s been right every other time, I was afraid not to listen to him!

I’ll say one thing, he sure is persistent! But seriously, Bill has a heart of gold and genuinely cares about everyone in his family.

"We need someone to believe in us - if we do well, we want our work commended, our faith corroborated. The individual who thinks well of you, who keeps his mind on your good qualities, and does not look for flaws, is your friend. Who is my brother? I'll tell you; he is one who recognizes the good in me." ~ Elbert Hubbard

Bill and his wife, Connie, have been married for over twenty years and together they are wonderful parents to their four children: Luke, Kyle, Joey and Callie. 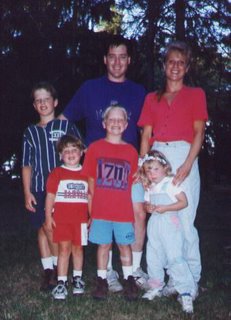 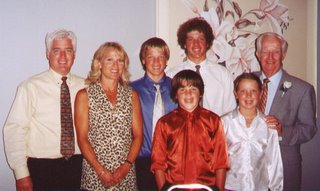 Whenever we visit their house it’s like Grand Central Station with friends constantly calling or coming over. In fact, just a couple of weeks ago Keen and I were in Olathe and we decided to drop by for a short visit. When we arrived, their house was swarming with teenagers who had gathered to celebrate Callie’s 13th birthday. There were pizza boxes galore and pop cans everywhere, and Connie was sitting on the floor organizing some games for the partygoers. If that wasn’t enough excitement for one night, they allowed their son Joey to invite four or five of his friends over, too! Yes, Bill and Connie are two of the most hands-on parents I know. They always attend their children’s’ various sporting events, even when that means traveling back and forth from one end of town to the other every Saturday and Sunday.

I might also add that Connie and I have two things in common: we both kept detailed journals of the funny things our kids said and did while growing up, and we both like to write poems. In fact, this Christmas I’d like to share a humorous poem/newsletter Connie wrote several years ago (with her permission, of course).

Lastly, I’d like to write about the way Bill and I seem to share the same warped sense of humor. Sometimes we can get pretty silly. For example, once we got off on a goofy tangent during an exchange of emails. It started with Bill saying: “If you need a proof reader, I could do it, for a fee.” Then later he sent me a picture that his son Kyle took at Josh and Lisa’s wedding, and he wrote: “I must copyright the photo Kyle took before it goes too far. I could ask him to sign your copies, for a fee.” But the straw that broke the camel’s back was when, in a more serious e-mail, I asked him to say some prayers for us. Believe it or not, he replied that he would be happy to, “for a fee.”

That’s what instigated me to write the following ditty:

What's all this about a fee?
We should charge you!
You little turkey!

And I don't think God
Would be very pleased
To hear that you’re charging
For petitions and pleas!

And besides, I thought blood
Was thicker than water
Are you forgetting,
I'm your mother's daughter?

So for your sake
I'll pretend you never said it
And I suggest you drop your suggestion
Or else you're gonna get it!

But Bill still got in the last word with this response: “I'll drop it, for a fee.” 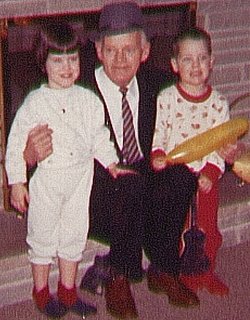 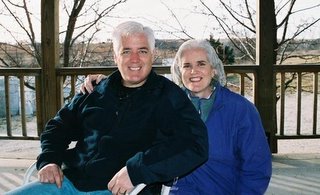 Posted by Eileen Umbehr at 7:08 AM