“In that wonderful day when the Lord gives his people rest from sorrow and fear, from slavery and chains . . . You will say, ‘The mighty man has been destroyed. Yes, your insolence is ended.  For the Lord has crushed your wicked power and broken your evil rule. You persecuted the people with unceasing blows of rage and held the nations in your angry grip. Your tyranny was unrestrained.’ But at last the land is at rest and is quiet. Finally it can sing again!  Even the trees of the forest . . . sing out this joyous song: Your power is broken! No one will come to cut us down now!” ~ Isaiah 14:3-8 (NLT)

Last week I shared a letter I had written to a friend of mine who was struggling with her decision to file for divorce after her husband had an adulterous affair.  This is a copy of her response to my letter:

You have been a faithful woman of God and a faithful friend to me, Eileen.  Your letter, I know was penned from the heart of God.  He’s taking me to a new place of freedom and has helped me to release any hope of [my former husband] returning.  I’m grateful – only He could have done it.  The book was a wonderful, encouraging blessing.  It was good to hear the heart of someone else caught in similar experiences.  It brought comfort and reassurance to me, and it came at exactly the appointed time. I left the next day for a nine-day vacation and read it then.

You know how God helps us take steps by sending just the right words thru people & books & letters.  He’s done that again, and I think He bound me to your heart because He wanted to use you to walk me all the way thru this to the final freedom.

Writing this to you is the first time I’ve expressed that it’s finally over and I feel free.

I know it isn’t easy to break free – especially when there are children involved.  One person I know put it this way: “You just don’t want to be a statistic.”  But your peace of mind is worth it. Your physical safety is worth it. Your emotional well being is worth it.  And your health is worth it.  Stress is known to be a major contributor to physical ailments, and living with someone who abuses you day in and day out will eventually take a toll on your health.  Not only that, but it is detrimental to your children to be raised in a war zone full of constant yelling and strife.

Patricia Evans has written two excellent books that I’d like to recommend: “The Verbally Abusive Relationship: How to Recognize It and How to Respond,” and “Verbal Abuse Survivors Speak Out on Relationship and Recovery. In her second book, Patricia shares some quotes from women who have been verbally abused by their husbands:

“I thought it was one of his ‘moods.’  Now I’ve put the pieces together and understand his ‘moods’ were verbal abuse.”
“I thought that I was a terrible wife for saying the wrong things or voicing my opinions.  Now I realize I don’t deserve to be pushed out of the way so he can walk through.”
“I thought that if he really knew I loved him he would love me enough to hear me.  Now I know he will never change.”

I remember the saddest thing I ever heard my sister say was that she had given up on the hope that her husband would ever truly love her. “I thought if he couldn’t love me,” she explained, “then maybe he could at least learn to tolerate me.”  This is a woman who spent her life trying to please her husband. For example, one day she cleaned the house from top to bottom to make him happy (since he was a neat freak), and when he got home all he said was, “Hmmmm. You’ve been cleaning.”  Then he promptly walked over to the air conditioning vent in the hallway and gave it the white glove test.  Of course he immediately voiced his disapproval and assured my sister that she had sadly come up short once again, despite her best efforts to win his approval.  I don’t know how she put up with him for all those years.  Looking back, she wonders herself.

Unfortunately, husbands like this are not a rarity.  I heard about one guy who yelled at his wife for throwing a tissue in the waste basket that he had just emptied.  Another husband on the Dr. Phil Show criticized how his wife loaded the dishwasher, the way she organized her cupboards and how she dressed.  Even though his wife was a busy stay-at-home mom with three small children, he wanted her to wear tight shirts and spandex pants around the house all day.  In fact, he said his fantasy was to have his wife greet him at the door in a French maid outfit.  Dr. Phil responded by saying, “Buddy, you couldn’t dig a bigger hole for yourself if I brought you a backhoe!”

Dr. Phil told one woman that what she had was not a marriage – it was an abusive situation. He stated, “I would rather be healthy alone being my own best friend, than sick and living in a controlling situation with someone else.”  The woman said that her husband “thinks he’s justified because it’s his house and his life and he should be able to do it his way. Period.”  Dr. Phil replied, “Well, he certainly can.  But by the grace and strength of God, he would do it without me, if I were you.”

I’d like to close with the following excerpts from a sermon delivered by T.D. Jakes:


There are people who can walk away from you. And hear me when I tell you this. When people can walk away from you: let them walk. I don't want you to try to talk another person into staying with you, loving you, calling you, caring about you, coming to see you, staying attached to you. I mean – hang up the phone. When people can walk away from you, let them walk. Your destiny is never tied to anybody that left. The Bible said: “For had they been of us, no doubt they would have continued with us.” [1 John 2:19] People leave you because they are not joined to you. And if they are not joined to you, you can't make them stay. Let them go. And it doesn't mean that they are a bad person.  It just means that their part in the story is over. You've got to know when people's part in your story is over so that you don't keep trying to raise the dead. You've got to know when it's dead. You've got to know when it's over. Let me tell you something. I've got the gift of good-bye. I believe in good-bye. It's not that I'm hateful …. I know whatever God means for me to have He'll give it to me. And if it takes too much sweat, then I don't need it. Stop begging people to stay. Let them go!If you are holding on to something that doesn't belong to you and was never intended for your life, then LET IT GO!If you are holding on to past hurts and pains ….LET IT GO!If someone can't treat you right, love you back, and see your worth ….LET THEM GO! If you are involved in a wrong relationship or addiction ... LET IT GO!If you are holding on to a job that no longer meets your needs or talents ...LET IT GO! If you're stuck in the past and God is trying to take you to a new level …. LET IT GO!If you are struggling with the healing of a broken relationship ....LET IT GO! If you keep trying to help someone who won't even try to help themselves ...LET IT GO!If there is a particular situation that you are so used to handling yourself and God is saying "take your hands off of it," then ... LET IT GO!Let the past be the past. Forget the former things. GOD is doing a new thing for you! So LET IT GO!

“Do not [earnestly] remember the former things, neither consider the things of old.  Behold, I am doing a new thing; now it springs forth; do you not perceive and know it, and will you not give heed to it?  I will even make a way in the wilderness and rivers in the desert.”   ~  Isaiah 43:18,19 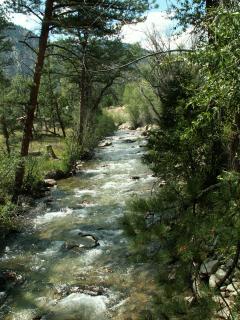