“It is right that I should feel as I do … for you have a very special place in my heart… God knows how much I love you….” ~ Philippians 1:7,8 (NLT)
And I will always do my duty,
no matter what the price,
I've counted up the cost,
I know the sacrifice.

Oh, and I don't want to die for you,
but if dyin’s asked of me,
I'll bear that cross with honor
‘cause freedom don't come free.

On May 10th, our firstborn son, Jared Joseph, will turn twenty-five years old. Jared has always been the light of our life, and now he is the light of his wife’s life (Erin) – and their two sons (Asher and Gabriel).

Jared graduated from Wabaunsee High School in 1997 and attended Kansas State University for about a year and a half. After concluding that he hated school, and school hated him, his Grandpa Van Kirk suggested that he might want to consider going into the military. Jared was adamantly opposed to the idea, as evidenced by his declaration that he would rather pull his fingernails out one by one than join the armed forces.

But then September 11th happened and everything changed. With Erin’s support, Jared decided to enlist in the United States Navy.

No one was more surprised than we were by Jared’s announcement. I asked him what when through his mind when he made the decision to enlist, and he replied, “When I saw those planes hit the towers and realized our country under attack, I just felt like every generation has their war to fight and this is our generation’s turn.” We were never prouder of our son than we were at that moment. 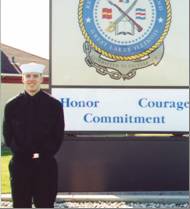 This is a poem I wrote after Jared had been in the Navy for about a year.

The other day I was talking
on the phone
with our three-year-old grandson,
who lives in Ohio

He was telling me about the snow,
and his little brother, Gabe
and about the paper airplane,
his other grandma made

When all of a sudden,
out of the blue
he asked me a question,
so innocent and true

How do I explain,
that his daddy went away
to fight for our country –
that’s why he couldn’t stay

He’s too young to understand,
that when Daddy saw the towers burn
He said, “Every generation has their war to fight,
and this is our generation’s turn.”

So I just tried to keep it simple,
but his little voice sounded so sad
“He had to go back to the Navy?
I’m gonna miss my Dad.”

Yes, those who serve our country,
aren’t the only ones who sacrifice;
it’s their spouses and their children,
who also pay a heavy price

But we are proud of our son,
and his wife and children, too
Because the price they pay for freedom,
they pay for me and you. 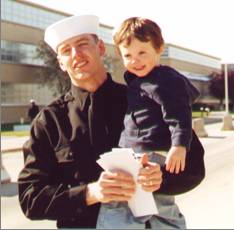 **********************************
Jared is an E-5 in Special Forces; specifically, he is a Special Warfare Combatant Craft Crewman (SWCCC). Their duties involve the insertion and extraction of Navy Seals. At his graduation ceremony in Coronado, California last June, Jared was selected as “honor man” and received special recognition for his academic and physical achievement, positive attitude and determination during the rigorous training.

Jared’s task unit is officially deployable now, having just completed the final phase of their training. For obvious reasons, we are hoping that he doesn’t see active combat; however, he is hoping that he does. He said it might be hard for us to understand, but after spending three years of his life training, he wants the opportunity to put what he learned to use. “I didn’t join the Navy to sit behind a desk,” he said. “I really didn’t.” So we have to put Jared in God’s hands and pray that he and all the other American soldiers will be protected from harm.

The journals I kept when Jared was a young boy repeatedly make reference to what a tenderhearted child he was. I remember when Josh came along everyone warned us that Jared might become jealous. But that was never the case. Even though Jared was only 2 years old, he was always very nurturing with Josh. He would hold him in the rocking chair and say, “Ahhhh, baby Josh.” One time I was carrying Josh while he was crying and Jared tried to cheer him up by dancing around and acting silly. “Is he happy now, Mom?” he asked.

One night when he was three years old Keen and I were sitting and talking and Jared just looked over at us and said, “I want to give you a kiss and a hug, kids.” When we told him he was special he said, “You’re special, too, mommy and daddy.” He used to love wrestling with his Dad. He’d say, “Hey Dad – you wanna razzle dazzle me?”

When Jared was about six years old he said, “It’ll be kind of sad when I grow up and become a father and you’ll have to let me go. But you’ll still have Josh cuz he has a ways to go yet before he grows up.”

Here’s an excerpt from when Jared was 8 years old. He had just spent his own money to buy me a “gold” quartz watch ring for my 29th birthday. I was so touched, I just cried and cried.

“I wasn’t sure if you’d like it or not, Mom. But you really like it a lot, I can see. I thought about getting this necklace with colored beads but then I didn’t think that would be too neat. Then I was gonna buy you this thing you put in your hair that looks like a knife is going through your head. I thought that would be kind of unusual. But then I decided you’d like the ring best. You know, it looked like something a woman would like to wear – so delicate – and when another woman saw it she’d wish she had one.”

Today Jared came up to me and said, “Wait. I want to see how tall I am up to you. Look, I’m up to your neck.” When I told him that he was going to pass me up pretty soon, he said, “Yeah. Then you’ll have to look up to me and see how I felt when I was a little kid.”

I’ve always looked up to you, Jared…
and I always will. 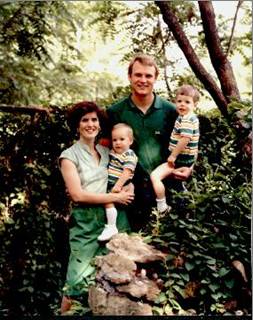 In this picture, you were one and three
Two peas in a pod, so full of glee.

Now you're young men and fully grown
Where have the years gone? My, how they've flown.

Your father and I love you, more than words can say
And we wish you all life's best, on your special birthdays. 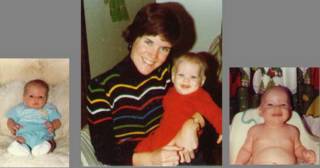 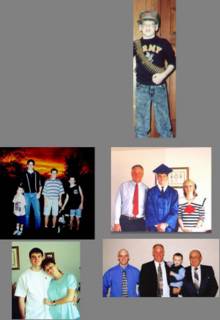 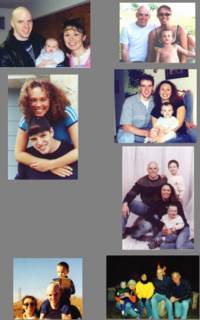 Posted by Eileen Umbehr at 1:08 PM