“For I was my father’s son, tender and beloved in the sight of my mother.” ~ Proverbs 4:3

We shared the same last name and the same color eyes
But we fought like tigers over that old red bike
I’m battin' first and you can't use my glove
It wouldn't take long 'til push came to shove
But, we looked out for each other with Brotherly Love

On April 2nd, our fourth and youngest son, Kirk Van, will turn 15 years old. By the time Kirk arrived, we had already honored nearly every male member of the family, so Kirk’s name was derived from my maiden name – Van Kirk. (Since we knew we were going to call him Kirk, we just reversed the order.) When Kirk was born people commented that we almost had enough boys to form a basketball team and Keen said, “We already do, if I play.”

Kirk was an adorable and sweet baby, even though he didn’t sleep through the night until he was 8 months old. We finally learned that he was allergic to milk. After switching him to soy milk, he slept like a baby and so did I.

Kirk has always been a great communicator. When he was little, he could talk your ear off. One day when Kirk was playing with toys in the living room he asked me a question as I was passing through to the kitchen. I was having a bad day and had reached the end of my rope so I just didn’t respond. Then I heard his puzzled little voice say, “Hmmmm….she just yooked at me.”

Another time we were shopping and he asked me where we were going next. Rather than go into a long explanation about all the errands we had to run that day, I tried to take a short cut by simply replying, “We’re going out to the van.” But no such luck –he wasn’t fooled. “No! I mean, where are we going after we go to the van?”

Another one of Kirk’s attributes is that he has always loved to organize things and be in charge. We used to say he would’ve run the whole household if we let him. One day Keen decided to let Kirk ride along in the trash truck while he picked up a small commercial route in Alma. After he asked his dad how many customers he had to pick up, Kirk got a little notebook and numbered the page from 1 to 20. Then every time Keen would empty a dumpster, Kirk would say, “check” and make a big checkmark by that number.

One time he went with his dad to deliver a dumpster to the home of a man who was doing some remodeling. Kirk overheard Keen tell the man that he would keep an eye on the dumpster and empty it whenever it was full. A couple weeks later, Keen received an “urgent call” from Kirk on his cell phone. He was calling to tell his dad that the dumpster was full and needed to be emptied. When Keen asked Kirk if the man had called, Kirk replied, “No. I was just driving by on my bike and noticed it was full.”

When Kirk was about 4 or 5 years old, Keen took him down to his shop while he did some work on the trash truck. Bad idea. Kirk walked in some mud and got stuck and then he knocked over a coffee can full of oil. In exasperation, Keen said, “That’s it, Kirk – you’re fired!” Well, Kirk didn’t know what that meant, but he knew he didn’t like the sounds of it one little bit! The poor little guy was utterly devastated. When he came home later, he cried, “Mommy, Mommy! Daddy tell me I’m fired and I don’t wanna be fired!”

Kirk loved playing with his three older brothers and vice-versa. They have always been each other’s best friends. One day, after his oldest brother Jared had moved out of the house, Kirk said, “I’m a Jared-holic. Whenever Jared comes over to the house and stays for a while to play with me, then I don’t want him to leave.”
This is a poem I wrote five years ago for Keener and Kirk.

My two precious boys,
ages fifteen and ten,
a five year difference
yet still the best of friends.

Last night they decided
to take a camping trip,
so they got right to work
and came up with a list.

A tent and some sleeping bags,
pillows and matches;
flashlights and bug spray,
and first aid patches.

At last they were ready,
the preparations were done;
it was time to embark
on their evening of fun.

The night air was cool,
but they made a fire,
then talked and ate smores,
until they grew tired.

They slept under the stars
then woke up with the birds,
and the cowboys in the pasture,
calling their herds.
It was a night to remember;
a special memory,
of when they were young;
footloose and fancy-free.

One day they’ll be thirty and twenty-five,
but they’ll always remember when,
they laughed and shared good times, so long ago,
back when they were fifteen and ten. 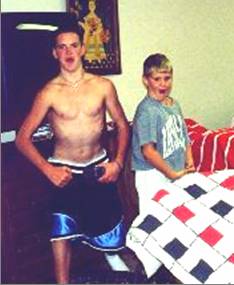 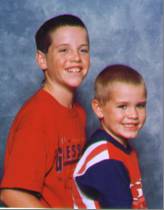 When Josh and Lisa got married last summer, they each wrote a little paragraph about all the members of the wedding party. Josh wrote about his groomsmen and Lisa wrote about her bridesmaids. Here’s what Josh had to say about Kirk:

“As the youngest of four boys, Kirk has survived purely out of sheer determination. He has had to survive the years of three older brothers taunting, teasing, and rough-housing with him. Through it all he has earned the nickname, “Little Man.” And what a great young man he is becoming, albeit not so little anymore. There is a little bit of each of us in Kirk; Jared’s sense of humor, Keen’s style and charisma, and my work ethic. I can’t wait to see what the Lord has in store for him in the coming years.”

The picture of me with Kirk below was taken when he was 10 months old. My mom always told me to get a picture of myself with each of the kids when they were babies, and I did. But this picture is special. You see, my mother passed away when Kirk was just five weeks old. The dress I’m wearing in the picture was one of my Mom’s and the outfit Kirk is wearing was the one she bought for him before she died.

Build Me a Son
By General Douglas A. MacArthur

Build me a son, O Lord, who will be strong enough to know when he is weak, and brave enough to face himself when he is afraid; one who will be proud and unbending in honest defeat, and humble and gentle in victory.

Build me a son whose wishbone will not be where his backbone should be; a son who will know Thee – and that to know himself is the foundation stone of knowledge.

Lead him, I pray, not in the path of ease and comfort, but under the stress and spur of difficulties and challenge. Here, let him learn to stand up in the storm; here, let him learn compassion for those who fall.

And after all these things are his, add, I pray, enough of a sense of humor, so that he may always be serious, yet never take himself too seriously. Give him humility, so that he may always remember the simplicity of true greatness, the open mind of true wisdom, the meekness of true strength. Then I, his father, will dare to whisper, “I have not lived in vain.”

P.S. This is a poem I wrote when Kirk was six months old

For Kirk
You are the youngest of our four sons
Our pride and joy, our precious one

Loving you, holding you
Makes our heart sing
Kirk, we wouldn’t trade you
For anything! 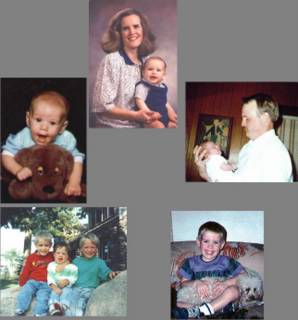 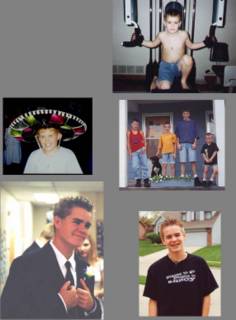 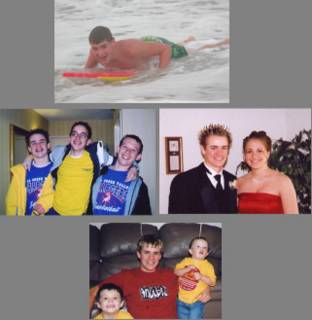 Posted by Eileen Umbehr at 9:34 PM