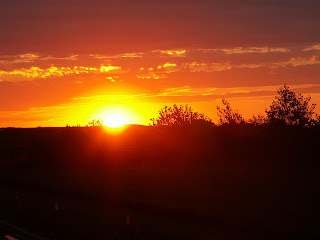 “The best of men cannot suspend their fate - the good die early and the bad die late." ~ Daniel Defoe

Although I didn’t know the 43-year-old Alta Vista man who tragically lost his life on November 8th, I do know that Michael T. Shepard was too young too die and that his family will forever grieve his passing. I extend my deepest sympathy to Michael’s loved ones. I would like to dedicate this collection of poems and stories to his memory.

Just Beyond
By Gale Rogers

I have gone just beyond
of where you are.
Out of sight of you
sitting beside an evening star.

Watch for me
when flowers bloom in spring
or in the evening
listen as the birds do sing.

I am with loved ones
where time will never cease.
No sorrow now, be glad for me
Forever I will know only peace.

The following two stories were sent to me from a friend:

A sick man turned to his doctor, as he was preparing to leave the examination room and
said, "Doctor, I am afraid to die. Tell me what lies on the other side."

"You don't know?” the patient inquired. “You, a Christian man, do not know what is on the other side?"

The doctor was holding the handle of the door; on the other side of which came a sound of scratching and whining, and as he opened the door, a dog sprang into the room and leaped on him with an eager show of gladness.

Turning to the patient, the doctor said, "Did you notice my dog? He's never been in this room before. He didn't know what was inside. He knew nothing except that his master was here, and when the door opened he sprang in without fear. I know little of what is on the other side of death, but I do know one thing: I know my Master is there, and that is
enough. And when the door opens, I will pass through it with gladness, but with no fear."

In January 2000, leaders in Charlotte, North Carolina, invited their favorite son, Billy Graham, to a luncheon in his honor. Billy initially hesitated to accept the invitation because of his struggles with Parkinson’s disease. But the Charlotte leaders said, "We don't expect a major address. Please just come and let us honor you."

After wonderful things were said about him, Dr. Graham stepped to the podium, looked at the crowd, and said, "I'm reminded today of Albert Einstein, the great physicist who has been honored by Time magazine as the Man of the Century.

The conductor continued down the aisle punching tickets. As he was ready to move to the next car, he turned around and saw the great physicist down on his hands and knees looking under his seat for his ticket.

The conductor rushed back and said, 'Dr. Einstein, Dr. Einstein, don’t worry. I know who you are. No problem. You don't need a ticket. I'm sure you bought one.'

Einstein looked at him and said, 'Young man, I too know who I am. What I don’t know is where I'm going.'"

Having said that Billy Graham continued, "See the suit I'm wearing? It's a brand new suit. My wife, my children, and my grandchildren are telling me I've gotten a little slovenly in my old age. I used to be a bit more fastidious. So I went out and bought a new suit for this luncheon and one more occasion.

You know what that occasion is? This is the suit in which I'll be buried. But when you hear I'm dead, I don't want you to immediately remember the suit I'm wearing. I want you to remember this: I not only know who I am, I also know where I'm going."

“Our valleys may be filled with foes and tears; but we can lift our eyes to the hills to see God and the angels, Heaven's spectators, who support us according to God's infinite wisdom as they prepare our welcome home.”

I Can Only Imagine – Words and music by Bart Millard, performed by Mercy Me
Posted by Eileen Umbehr at 12:11 PM