Every Life a Story: Joe Romano 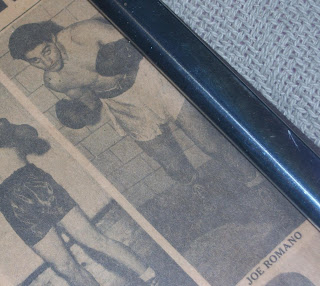 "To be a champ, you have to believe in yourself when nobody else will." ~ Sugar Ray Robinson

This week I’d like to introduce you to someone I met at the Presbyterian Manor in Topeka. His name is Joe Romano.

Joseph Rocco Romano was born on July 29, 1924, to Italian immigrants Mariano and Carmella Romano. He is the oldest child from a large Catholic family – five boys and four girls. His parents were originally from Ravenna, Italy, and settled in Ravenna, Ohio, in the early 1900’s. Joe’s father worked in a foundry in Cleveland for some time before purchasing his own coal yard and starting a coal delivery business.

After graduating from high school in 1942, Joe was drafted into the United States Air Force at the age of 18. While stationed in England, he was trained to become a gunner on the B-24 Liberator. He eventually flew in 32 missions over Germany. His crew consisted of a pilot, co-pilot, one nose gunner, two waist gunners (on left and right wing in middle of plane), a ball turret operator (which rotated underneath the plane), a top turret operator (which rotated from the top of the plane), and a tail gunner at the rear of the plane. Joe was the left waist gunner and the top turret operator was also the radio operator.

The guns they operated were 50 caliber machine guns. For protection, they wore flak suits, named for the razor sharp shrapnel that came from enemy shells that exploded at high altitudes. One hit could disable an engine or cause a fuel tank to explode. Although their plane was often hit by flak, they were fortunate to never sustain serious damage or injury to any members of their crew.

During a stopover in Topeka while Joe was still in the service, he met his sweetheart, Clara Nadine Cain, who went by her middle name, Nadine. The couple immediately fell in love and decided to travel to the courthouse in Alma to be married by Judge Victor Hergenreter before Joe had to leave again. Joe’s good friend, Cap McKinsey, stood up for the couple. Cap owned a barbecue place in Topeka at the time, and also ran the Lodge out at Lake Wabaunsee. Joe and Nadine were married for nearly twenty years before their only daughter Jodine Marian joined the family. 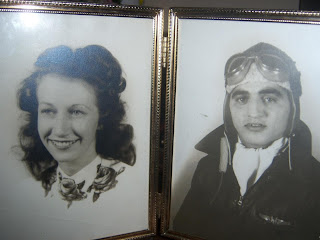 One of the most interesting aspects of Joe’s life is that he was a professional boxer. He first boxed in the service and did so well that he decided to turn professional after he got out. Joe weighed 127 lbs. and boxed in the featherweight category under the name “Little Joe” Romano. He trained at the Veterans Hospital gym in Topeka and followed a tough daily routine – running, lifting dumb bells, punching bags (both heavy and light), and jumping rope. Joe said that he boxed without any head gear – only a mouthpiece. “When I got in the ring, I stuck my nose right in there; I didn’t dance around much.” When asked about injuries, Joe replied that he had his nose broken a couple of times and a tooth knocked out once. “I got banged around quite a bit, but never had a broken bone. And my mind is still good – at least I think it is,” he added with a chuckle.

During his boxing career, Joe traveled the circuit throughout the Midwest covering Oklahoma City, Omaha, Michigan, and Indiana. He even boxed on the same card as Sugar Ray Robinson in St. Louis one time. At the close of his career Little Joe’s win-loss record stood at 35-15-2; 35 wins, 15 losses and 2 even draws.

After retirement, Joe worked at the Air Force Supply Depot at Forbes Field operating a fork lift. He also spent about seven years training and promoting other fighters. Nadine was a homemaker and held various sales at their home for individuals who didn’t want to organize their own sales. Earlier in life Nadine worked for the Carpenter brothers' dry cleaning business. She then taught her brother Bob (Cain) how to dry clean, and he went on to start his own business – Highland Park Dry Cleaning. Sadly, Nadine passed away near what would have been their 50th wedding anniversary.

Joe and Nadine’s daughter still lives and works in Topeka. After meeting and talking with Jodine on the phone, it didn’t take long for me to recognize that she inherited her dad’s ambition and feistiness. “Everyone tells me I’m just like my daddy,” she said. “But when that Italian boxer comes out it can get me into trouble!” Jodine has been a makeup artist for the past fifteen years and works on location. About four years ago she started her own make-up and hair business, The Joey Cain Company. Jodine specializes in weddings but also does photo shoots, fashion shows and even did makeup for a movie once. In addition, Jodine is the general manager at Applewood Barbecue and Bistro at Lake Shawnee, Kansas.

As for Joe, his hobbies have included golfing and playing poker – and he continued jogging clear into his sixties. Joe is a huge Elvis fan, as evidenced by the pictures of Elvis that line one wall of his room. 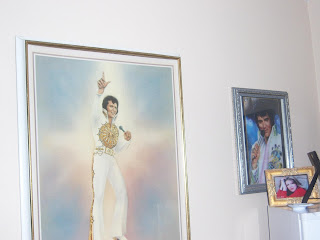 The remaining walls contain framed news articles from the Topeka Capital-Journal, along with a photograph of Joe with Frank Sinatra and another one of Joe with Primo Canero, a heavyweight boxing champion from Italy. 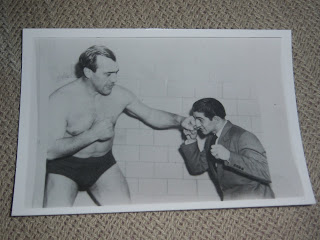 When asked about his personal philosophy, Joe replied: “Enjoy living. Take advantage of the time while you’re here. Do things you want to do.”

That sounds like good advice coming from a man who has lived life to the fullest – both inside and outside of the ring.