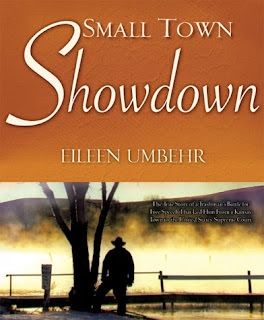 “. . . let us run with endurance the race that is set before us, looking unto Jesus, the author and finisher of our faith. . . .”

For those of you who have been waiting with bated breath for an update on my book, (and for those of you who couldn’t care less), I am finally able to report that a copy of my book, Small Town Showdown, is now available through Amazon.com. I ordered two copies myself last Tuesday evening and received them on Friday, so that was a pretty fast turnaround.

Lately I’ve been thinking about that old saying – “You can’t go home.” Well, what happens if you’ve never left? Although I wasn’t born in Kansas, this has been my home for nearly my entire adult life. And despite the conflicts Keen and I have been involved in over the years, we have no plans to move because there’s no place on earth we would rather live.

I remember back in 1989 when Keen was writing his weekly column, My Perspective. The commissioners used to accuse him of hurting people with what he wrote. But the truth is what it is: nothing more and nothing less.

As for me, whether one hundred or one million people read my book, I am content just knowing that I finally accomplished my goal. As I’ve mentioned before, I’ve been talking about this book for so long there were times when I felt like the girl who cried “Wolf!” So now it’s finally completed, for better or for worse – come what may. And now that the foundation has been laid, I can start working on the behind-the-scenes version of our story which will allow anyone who is interested to be a mouse in our house throughout the lawsuit years. But don’t be looking for it anytime soon!

In other news, ever since our oldest son Jared joined the Navy after 911, it has been his personal goal to become a Navy SEAL. Unfortunately, his poor eyesight prevented him from trying out, so he became a member of the Special Forces boat team known as SWCCC. Their responsibilities involve the insertion and extraction of Navy SEALS, a job Jared and his unit performed during a three-month tour of duty last year. Earlier this year, Jared underwent PRK surgery to correct his vision to 20/20, which enabled him to apply for the Navy SEALS program. Then last month he received his orders to report to Coronado, California, to begin BUD/S - Basic Underwater Demolition School which is a six-month program he will have to survive in order to reach his goal of becoming a Navy SEAL.

This week, Erin, Asher, Gabe and Emma, along with Erin’s mom Lu and their two dogs and two cats, will be traveling through Kansas on their way to California. Gabe is excited because he gets to start kindergarten since the cutoff isn’t until December 1st. When I called him on his birthday last Monday he excitedly exclaimed, “Gramma – today is my five!” Asher’s birthday was on Friday. When I talked to him on the phone and asked him how he liked being 8, he replied, “Well, it’s only my first day of being 8.” (I guess I’ll have to check back with him in a couple of months.) Emma is as pretty as ever – she is a girly-girl if ever there was one. She even likes shoes. Imagine that, at 16 months old! Jared said she actually brought him a pair of shoes one time and he put them on for her. Then a little while later she changed her mind (I told you she was all girl!) and brought him a different pair.

As for Josh, Lisa and Katelyn, they are one busy family. Josh is enjoying his residency program at Wesley Medical Center. Like most residents, he is putting in some unbelievable hours, but he is young, ambitious and hard working, so he is handling it really well. Lisa has also been able to keep her nursing skills up by working part time. Katelyn is doing well. She is very mobile and gets anywhere she wants to go with her unique belly-crawl. She pulls up on people, couches and tables, and even walks around them, but she’s not quite ready to take off walking yet. We’re all anxiously awaiting the arrival of Katelyn’s little brother or sister in a couple of weeks.

Keen II and Kirk Van are roommates in Manhattan while they attend Kansas State University. Kirk is a freshman and Keen is a senior. In addition to their studies, they both keep busy working. Keener works as a referee and Kirk works as a DJ for Complete Music. Kirk said that he has a dance every Friday and Saturday for four weekends in a row.

Keen continues to keep busy with his law practice. This week he attended a two-day conference in Wichita. Recently when I ran into one of Keen’s law professors from Washburn, he made the comment that Keen was born to be a lawyer. With God’s help, Keen reached his goal, and he is so grateful. He’ll never forget how he used to fill his days working as a trash man.

“All endeavor calls for the ability to tramp the last mile, shape the last plan, endure the last hours toil. The fight to the finish spirit is the one... characteristic we must possess if we are to face the future as finishers.”