Such is Life: Traveling

I guess I’ll have to abandon my Dear Abby/Ask Eileen idea because I haven’t received any questions from anybody. This made me wonder if I unwittingly came across as someone who thinks she knows it all. I sincerely hope not, because that is definitely not the impression I meant to give. In fact, nothing could be further from the truth. I know that I don’t have all of the answers, but I believe God gave us His Word as a road map to follow if we want to lead a happy life.

“[Christians] . . . do not have all the answers. They do not have God in their pocket. We cannot answer every question that any bright boy in the back row might ask. We have only light enough to walk by.”
~ Howard A. Johnson

I was simply hoping to use it as an opportunity to seek out answers from the Bible to see what it has to say on various subjects. But for now, that idea will have to be shelved. However, if you change your mind, just send your questions to: AskEileen@aol.com.

Until then, I would like to introduce a substitute segment for my column titled, “Such is Life.” This category will cover some experiences encountered along our journey of life that encompass a combination of joy and frustration. This week I will focus on the subject of traveling, because Keen and I just returned from spending the weekend with Jared, Erin, Asher, Gabe and Emma, in Ohio.

Our whirlwind weekend began when we arrived at the Kansas City airport in plenty of time to catch our 8:00 flight on Friday night. However, we were greeted by a “Delayed” message, with no explanation about why our flight had been delayed or for how long. So Keen and I decided to pass the time by logging onto www.youtube.com and watching funny videos on our computer. We were laughing hysterically at the various clips – and we didn’t care who heard us. It’s really true what the Bible says about laughter doing good like a medicine. We completely forgot about the inconvenience. Then a passenger on the same flight informed us that the airline was going to provide refreshments. So we packed up our belongings and made our way to the table for some cookies and water. The next thing we knew they were bringing blankets and pillows for everyone – something we didn’t interpret as a good sign. Before long, a voice came over the loudspeaker announcing that the flight had been canceled and they would be putting us all up in a hotel near the airport. So we got in line for our hotel voucher and learned that we would be flying out at 8:10 a.m. the following morning.

While waiting in line we struck up a conversation with two nice ladies named Twila and Pauline who had just returned from a two-week trip to Alaska. After we realized that there were more passengers than could fit in the hotel shuttle van, Keen decided to retrieve our Durango and drive to the hotel ourselves. We invited Twila and Pauline to ride with us, and they gladly accepted.

On our way to the hotel we got lost, but not for long. Then Twila received a phone call from someone wanting to know when she would be arriving home. After she hung up, I commented that they probably said, “You did what? You got in a car with two strangers?!” Then I said, “Just tell them, ‘yes, they were strange, but in a good kind of way!’” Oh, we laughed and laughed with our two new friends. They later said they felt God took care of them by sending us their way, and we told them they helped us, too, by easing the stress of the unexpected turn of events.

The next morning we enjoyed breakfast at the hotel and headed back to the KCI airport to catch our morning flight. After Keen left to park our car I realized that I left my cell phone plugged into the outlet in the hotel room. So I called the hotel and they said their shuttle van just happened to be approaching our terminal. So when Keen returned he caught the shuttle back to the hotel, retrieved my cell phone, and hopped right back on the shuttle back to the airport. Then when he reached security he realized that he forgot to pack his shaving kit with all those impermissible bottles of shaving cream, cologne and shampoo. The TSA agents gave him the option of going back to the terminal to purchase a Ziploc bag, (as if putting the items in a plastic bag would really make any difference). Thank God he declined and opted to allow them to confiscate the items because when I reached the gate I learned that they just made the last call for our flight. “Keen Umbehr, please report to gate number 30 immediately. Keen Umbehr.” We made it just under the wire! Later I contemplated how disastrous it would have been to have our evening flight canceled and then miss our next flight the following morning! But all is well that ends well, and we had a wonderful weekend, despite the hassles that go along with traveling! 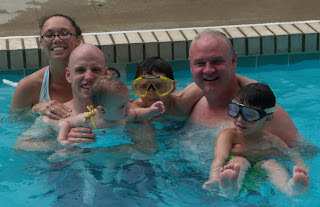 Enjoying time in the pool 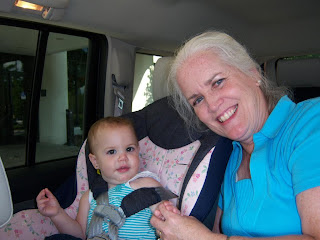 In closing, I’d like to share a poem I wrote about a trip my sister Mary and I took several years ago.

We got up at four,
We were right on time;
Then we caught our shuttle,
And everything was fine.

Mary hopped on her plane,
At seven fifteen,
And one hour later,
Came the plane for Eileen.

But lo and behold,
Be still my heart,
There was rain in Dallas,
So the plane could not depart.

This caused a chain of events,
From which I could not escape,
So I just read my magazine,
And accepted my fate.

I arrived late in Dallas,
With quite a jolt,
The stewardess said, "Run!"
So away I did bolt.

I ran like the wind,
Weaving my way through the crowd,
"Excuse me! Coming through!"
I hollered out loud.

Well, I made it to the gate,
I'm happy to report,
But I was all out of breath,
And all out of sorts.

So I relaxed in my seat,
And prepared for the ride,
I was just so relieved,
That I had survived.

When we landed in Kansas City,
I thought my troubles were behind me,
But oh, I was mistaken,
Soon some others would find me.

As I waited and waited,
For my luggage to appear,
My heart just sank,
As I realized my worst fear.

You guessed it! No luggage!
I had to file a claim,
And I returned home,
Losing more than I'd gained.

So for now, at least,
I have no intention to roam,
Because I'm more convinced than ever,
There's no place like home! 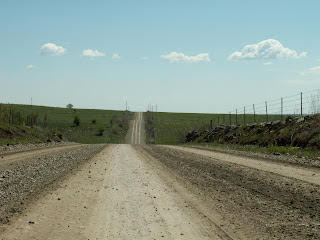 Country road in front of our home
Posted by Eileen Umbehr at 7:32 PM