Back in the Saddle Again (Sort of)

“You don’t choose your family. They are God’s gift to you, as you are to them.”

We had another successful Van Kirk family reunion in Colorado with great weather, wonderful food, and lots of rafting and hiking. I’ve included a group picture taken at Mt. Princeton Hot Springs Resort. 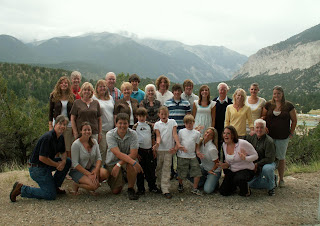 As the title of this column suggests, I am only “sort of” ready to resume writing my column. Therefore, I will be relying on my friend Larry Welch to provide a guest column this week from his collection of stories titled, “On the Run in Singapore.” It is a tribute to his late friend, Rosemary Williams.

Rosemary Williams, 60, of Silver Spring, Maryland died June 4 in her home after a year-long fight with cancer. She was Director of Howard University's Cancer Center Tumor Registry.

Rosemary was a long distance friend and former colleague in the struggle to overcome breast cancer. I never met a more kind or thoughtful woman. For 10 years we worked together in Washington to raise dollars for breast cancer research and treatment; and create awareness for the importance of early detection of breast cancer. Well respected in her community, Rosemary was a powerful influence on others to do better in their lives.

Several months before she died, Rosemary sent me the following story she had written about her brother Conrad. I am reprinting it as a tribute to Rosemary and her brother, and to help us all think about doing better in our lives.

The Greatest Danger of All

"My handsome brother, Conrad, was the first born of my parents’ three children. He was born May 6, 1942, in Homestead, Pennsylvania and except for one year in the Washington, DC area while he was on WOL Radio (as music director and newscaster from 1969-1970), he spent his life in Pittsburgh, Pennsylvania. He also spent three years in the Army from 1960 to 1963.

"At about age 11 or 12, Conrad decided he wanted to box in the Golden Gloves. My parents were terrified. They knew one young man personally who had a permanent brain injury from boxing. My brother had a mind of his own and boxed for a number of years as an amateur and had a few professional fights in his early 20’s. He lost only one fight which was a decision. My father believed he would have done well as a welterweight boxer, but lost 3 years from the sport when he joined the military at age 18.

"Another danger came as one ended! My brother joined the US Army's 82nd Airborne. Of all things, he was jumping out of airplanes! My mother and I prayed daily for this paratrooper. Years later, my brother shared with me that he could not believe he was jumping out of planes. He had to be young to have done that. He went through a number of years when he would not fly in a commercial jet, because he was afraid of planes after an incident over the Gulf of Mexico. He and other soldiers were returning to Fort Bragg from Panama when one of the plane’s engines went out. My brother was at the door to parachute out, but the other guys stopped him and they all made it back to Fort Bragg on one engine.

"He married and had a family after military service. My family and I were breathing fine when he decided to become a disc jockey, later newscaster and talk show host on the radio. He was so admired by former teachers and classmates that he became something of a Pittsburgh celebrity. Then at age 33 he decided to fulfill his lifelong dream of becoming a law enforcement officer. He was a uniformed Pennsylvania State Police Officer for a number of years and then became an undercover officer. Much to the horror of my family, he spent about 25 years in this job. He was to retire in 2002 due to the required age 60 retirement for the Pennsylvania State Police. Then…

"He said to me one day that he felt something in his chest near his sternum. I told him to immediately see his doctor. He did not at that point, but did see the doctor several months later. A CT Scan of the chest was done. It showed a right lung mass. Being in the cancer field, I was horrified. He had been a cigarette smoker for 44 years. He had escaped so many dangers in life, I just kept believing that he would come out of this also.

"Conrad was admitted to a hospital for biopsy. He had his surgeon phone me to tell me the news since my field was cancer and he wanted me to make any decisions about his care. He had “squamous cell carcinoma” of the lung. There was no doubt that this type of cancer is cigarette related.

"Someone who had survived boxing, parachuting, and bullets as a state trooper now couldn't escape lung cancer. The greatest danger of all was his cigarettes. I had tried to tell him for years to stop smoking, but he just laughed off my fears.

"The American Cancer Society estimated that in 2005 there were more than 175,000 cancer deaths caused by tobacco use. When Conrad began smoking at age 16, death at age 59 ½ was hard for him to imagine.

"I want all the beautiful young people who smoke to know that life is very short, so please do not rush it away. Quit now while you have a chance to change the course of your life. Look for smoking cessation programs or just realize you need to quit for your loved ones who would be devastated by an untimely loss caused by what may also be your greatest danger of all."

IN CLOSING, cancer deaths related to tobacco usage is the second major cause of death in the world with about 5 million people a year meeting their maker. Of the 1.1 billion people who smoke, about half will die prematurely. And there's not much hope for the future: 100,000 young people a day start smoking. By any measure, tobacco-related premature death is at an epidemic proportion. If you are a smoker, quit today! If you don't smoke, help someone who does by encouraging them to quit. We owe it to each other to preserve life where we can.

Note: See www.smokefree.gov for resources to help to quit smoking.
Posted by Eileen Umbehr at 9:28 AM