“My dear brothers, take note of this: Everyone should be quick to listen, slow to speak and slow to become angry, for man's anger does not bring about the righteous life that God desires. Therefore, get rid of all moral filth and the evil that is so prevalent and humbly accept the word planted in you, which can save you.”

I think I came out of the womb kicking and screaming, eventually earning quite the reputation for my temper tantrums. My siblings have said that my tantrums became so commonplace that they just learned to ignore me. I can still remember one time when I was about five years old and I was kicking and screaming at the top my lungs. My grandmother (whom we called Nanny) stood in the doorway of the room and kept saying, “Oh, look at the big phony - she doesn’t even have any tears. What a phony baloney!” Of course that just made me even angrier, and so I screamed even louder.

“As a rule, anything that is either shouted or whispered isn’t worth listening to.”

My Mom said that she couldn’t get a baby picture of me because I screamed blue bloody murder the day she took me to the studio. She finally got a professional photo of me, but even then I had a furrowed brow and a scowl on my face. 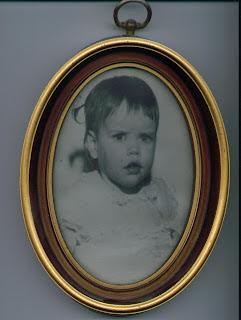 When I was about six months old, I began refusing a bottle. I didn’t want anything to do with anybody – I just wanted to do it myself! (An apparent case of early-onset terrible twos.) Then when I was about nine or ten years old, I told my family that I wanted to grow up to become a witch and rock in a rocking chair on a mountaintop until I died. (Lovely, isn’t it?) My morbid vision of the future earned me the nickname “Icky-Poo,” or “Ick” for short. (My dad still calls me that to this day.)

Although I am still a private person who not only enjoys time alone, but actually needs it, I no longer maintain my former negative, gloomy outlook on life. In fact, quite the opposite! (Can anyone say Pollyanna?)

In all seriousness, I attribute the dramatic change in my attitude to the transforming power of God’s love. When I was 14 years old, I attended a David Wilkerson crusade (author of “The Cross and the Switchblade”) and heard the Gospel explained in a way that I had never understood before. I used to think that I had to be good enough to get into Heaven, a thought which had tormented me with fear.

“For it is by grace you have been saved, through faith – and this not from yourselves, it is the gift of God - not by works, so that no one can boast.”

Before that I would literally lie awake at night and think about how eternity went on and on and on and never ended. So when I heard the good news that Jesus died for the sins of all humankind, I jumped at the chance to have the peace of knowing that even though I could never be good enough to earn my way to Heaven, through God’s free gift of salvation, I could be completely forgiven and made whiter than snow, with the assurance of spending all eternity with Him. This revelation gave me ample reasons to rejoice and shed my cynical attitude. Now all I want to do is share God’s love with every person I meet.

Nonetheless, I must admit that my former rageaholic tendencies still surface more often than they should.

“But no man can tame the tongue. It is a restless evil, full of deadly poison. With the tongue we praise our Lord and Father, and with it we curse men, who have been made in God's likeness. Out of the same mouth come praise and cursing. My brothers, this should not be.”

But like most of us, I am a work in progress, and thank God, He is patient with me.

“Because of the Lord’s great love we are not consumed, for His compassions never fail. They are new every morning; great is Your faithfulness.”

In Lisa Bevere’s book, “Be Angry, But Don’t Blow It,” she talks about how she tried to blame her temper on her upbringing, her husband, her kids, her ethnic background, her hormones, or the fact that her parents were divorced and her father had a drinking problem. But one day she realized that she had no one to blame but herself, and she finally acknowledged her weakness and took ownership of her own destructive choices. She said it was then that she received the much-needed help that God was willing to offer all along. (As Dr. Phil always says: You can’t change what you don’t acknowledge.)

“I have learned that once you get angry, you have only two options: stay angry or get over it; no one can make me angry without my permission.”

NAIL IN THE FENCE
Author Unknown

There once was a little girl who had a bad temper. Her mother gave her a bag of nails and told her that every time she lost her temper, she must hammer a nail into the back of the fence.

She told her mother about it and the mother suggested that the girl now pull out one nail for each day that she was able to hold her temper. The days passed and the young girl was finally able to tell her mother that all the nails were gone.

The mother took her daughter by the hand and led her to the fence. She said, "You have done well, my daughter, but look at the holes in the fence. The fence will never be the same. When you say things in anger, they leave a scar just like this one."

“Speak when you are angry and you will make the best speech you will ever regret.”

“Good sense makes a man restrain his anger, and it is his glory to overlook a transgression or an offense.”