A Moment in Time

Our family has witnessed this philosophy being played out multiple times during the past year. No matter how many bad things life has thrown our way, we have always had plenty of good things to be thankful for. This week, I am happy to be able to share some good news, brought to us courtesy of our kindhearted daughter-in-law, Erin.

As you may recall, Erin gave birth to our first granddaughter, Emma Eileen, on May 22nd. Emma was born prematurely and had to stay in the hospital for about a week, but she is doing really well now, thank God. While I was trying to figure out when I might be able to meet little Emma, Erin called with a big surprise. She said that Jared was scheduled to return home from Iraq on July 7, and she offered to fly all of us down to Mississippi to surprise him when he got off the plane! Needless to say, we were immediately on board (pardon the pun), and humbly accepted her generous offer.

Keen, Keener, Kirk and I all flew down the day before Jared was scheduled to arrive. (Josh and Lisa couldn’t make it since their own one-month old daughter, Katelyn Seraphina, had just been released from Children’s Mercy Hospital. She is also doing well – in fact, she just rolled over by herself for the first time – several months before most babies do!) I was so excited about the trip that I couldn’t sleep a wink the night before, but I made up for it on the ride to the airport and while traveling in the airplane.

When we arrived at Erin’s home, Grandpa and Uncles Keen and Kirk immediately started rough housing and wrestling with Asher and Gabe. Sounds of laughter and excited screams filled the air, as the boys were jostled and held upside down by their feet. Of course, the adults ran out of gas long before the boys did! 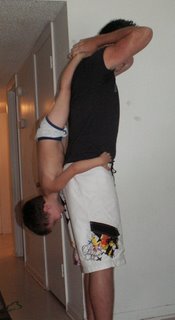 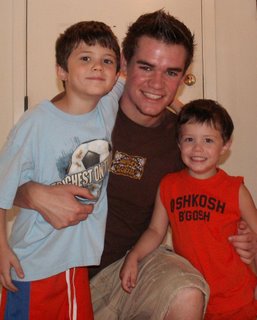 Uncle Kirk with Asher and Gabe

Meeting Emma for the first time was a sheer delight. She is such a sweet and beautiful little baby. Jared commented that if they dressed her in blue no one could tell if she was a boy or a girl – but I totally disagree! Emma definitely looks like a girl! 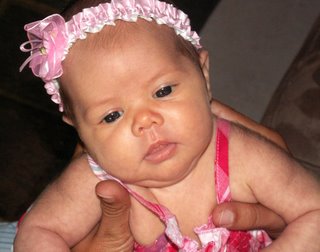 I so enjoyed holding her and looking into that pretty little face. I even got to feed her a bottle. Erin said she’ll take a bottle from anyone except her. Emma may be young, but she knows her momma, and when Momma is holding her, she won’t settle for anything but the real deal. Babies are so much smarter than we give them credit for! 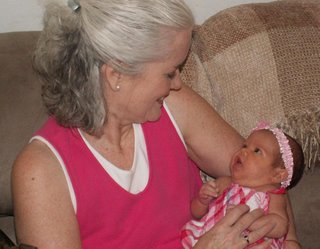 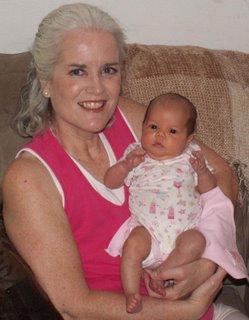 Erin was able to reserve us a room at the Navy Lodge located right on base and within walking distance of their apartment. After a great night’s sleep, Keen and I walked to their apartment the next morning to make pancakes for the boys. When we arrived, we expected to see a flurry of activity with everyone getting ready for Jared’s arrival, but no one was stirring – not even a mouse. Then my cell phone rang; it was Erin calling from upstairs. “Are you guys downstairs?” she asked. When I said yes, she replied, “I got some bad news last night; I’ll be right down.” My heart just sank. I immediately imagined the worst case scenario that Jared’s arrival was postponed and we would miss him altogether since we were scheduled to fly out early the following day.

As it turned out, Jared’s flight had been delayed in Germany, but thankfully they were still scheduled to arrive that day, just five hours later than they originally planned.

The hours seemed to drag on, especially for Erin and her friend Amy, who were both anxiously awaiting their husbands’ return. Finally it was time to depart, and we drove to the Stennis Space Station (where Jared normally works) to pick up his Jeep. We still had some time to spare, so we decided to drive by Jared and Erin’s old apartment in Bay St. Louis – the one that had been destroyed by Hurricane Katrina. Surprisingly, it hadn’t been bulldozed over yet and we could still see their possessions through the broken windows. I even walked to the front door and took a few pictures of what used to be their kitchen and living room. It was quite shocking to see the devastation.

At any rate, we made it back to the air base in plenty of time, all decked out in our matching t-shirts that I had made up at a store in Manhattan called Thread. We had a picture of Jared holding his gun put on the front of the shirts with the words, “Welcome Home, Jared/Daddy.” But I couldn’t put that picture on little Emma’s, so her little t-shirt had a picture of her wearing an outfit that had “Daddy’s girl” on the front of it. Then it said, “Welcome Home Daddy! I love you!” Since it would be the first time Jared met Emma, we jokingly thought about several other slogans we could have put on her shirt, such as: “Who’s My Daddy?” and “Where Have You Been All My Life, Daddy?”

While we gathered at the air base for a family photo before Jared’s arrival, a group of officers were standing nearby smirking at the sight of eight individuals of various sizes and ages wearing t-shirts with Jared’s blown-up muscle man picture plastered on the front. I made the comment that Jared was probably going to be mortified and they all broke out laughing. 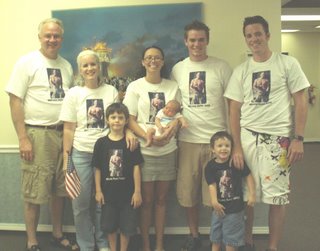 Then they asked if their photographer could take a picture for their command. So the photographer took a group shot, and then he asked if he could take a close-up of one of the shirts. Well, I was wearing my new prosthesis and I wasn’t too sure if I was “even”, so I directed him to Keen’s chest instead of mine. The photographer also took a close-up shot of little Emma in her “Welcome Home, Daddy” shirt. 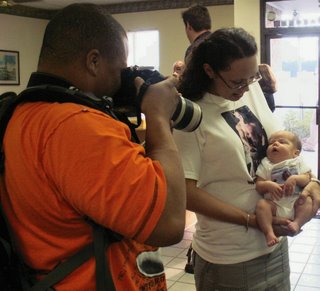 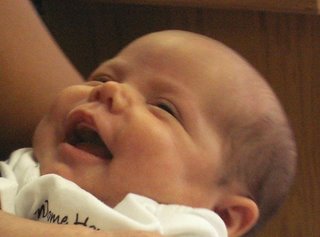 The excitement continued to mount as the wives and children of the servicemen waited with great anticipation for the plane’s arrival. “Here it comes!” someone shouted. So we all ran outside and watched the mammoth green plane descend from the evening sky, just as the orange sun was setting on the horizon. It gave me goose bumps and brought tears to nearly everyone’s eyes. 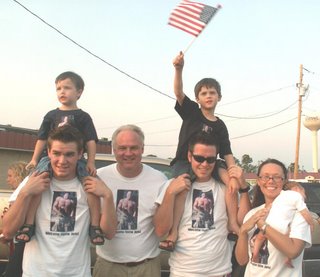 After a short time, they opened the gates wide so all the families could rush to hug their loved ones. Keen said he didn’t expect to feel so much emotion when Jared stepped off the plane, but he couldn’t stop the tears from streaming down his face. He said it was like watching Jared be born all over again. I, too, felt a rush of joy, relief and pride, while I busily snapped pictures and attempted to capture that magical moment in time.

The first person Jared saw was Erin walking towards him carrying his little six-week-old daughter, Emma. 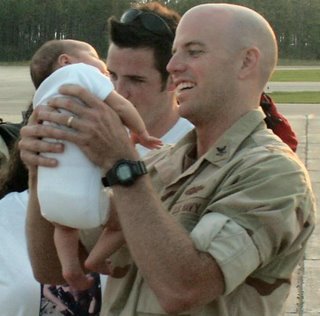 She looked like such a little peanut in her daddy’s strong arms – and what a contrast between Jared in his military fatigues and Emma in her lily white outfit. 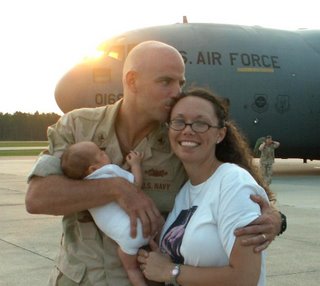 Asher and Gabe followed right behind to hug their daddy’s legs and welcome him home. 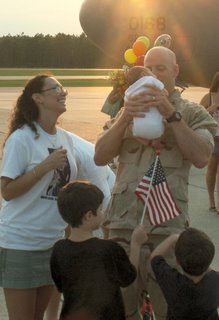 One by one, the rest of us worked our way to Jared, much to his surprise. “Erin made it all possible,” I said as I hugged him and cried. Although he was happy to see us, he was more than a little embarrassed by the array of T-shirts bearing his image. He said he would never hear the end of it from the other guys in his unit. (And he was right.) 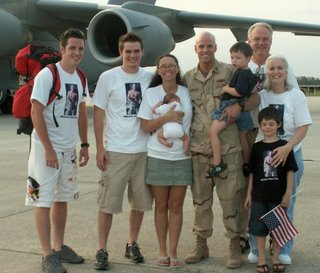 After arriving back home, Keen cooked some delicious rib eye steaks on the grill and we all enjoyed spending time together and hearing about Jared’s experiences overseas. He was definitely in the thick of things, so we are very grateful that he made it home safely.

But no one is more grateful than Jared’s wife, Erin,
Who delivered a baby while he was away,
And two little boys named Asher and Gabe,
Who missed their daddy more than words can say. 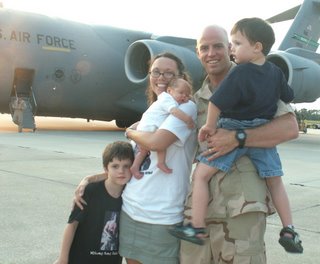 Welcome Home, Jared. We are so proud of you...and we love you!

“You shall rejoice before the Lord your God, you and your son and your daughter....” ~ Deuteronomy 16:11a (NKJV)
Posted by Eileen Umbehr at 9:32 AM