The Circle of Love

“There are three things that will endure – faith, hope, and love – and the greatest of these is love.” ~ I Corinthians 13:13 (NLT)

Keen and I had our first date on March 15, 1974, so we’ve been celebrating Valentine’s Day together for over 30 years now. The other night I told him how privileged I feel to be married to him. Keen is so much fun to live with. He keeps me laughing. He makes me feel loved and important. And even though I don’t have a college education, he tells me that I’m “a hundred times smarter” than he is. (Untrue – but still nice to hear.) Keen makes me feel like I can accomplish anything.

"How bold one gets when one is sure of being loved!" ~ Sigmund Freud

My Privilege
By Eileen Umbehr

County officials called him dirt
the stuff he hauled in his trash truck
A troublemaker and an s.o.b.
were some other names that stuck

But I would be amiss,
not to mention the positive ones, too
Lest you get the wrong impression
and the truth be misconstrued

A visionary with a sense of humor
and keen political insight
A man determined to achieve his goals
and stand up for what is right.

The Freedom Forum called him a First Amendment hero
The Capital-Journal – a Distinguished Kansan
But for twenty-five years its been my privilege
to simply call him “husband.”

When I was a teenager, I had to write an English paper for school and I chose to write about the subject of love. When I interviewed my mother for the story, she said that love was a one-way street – in the other person’s direction. As an adult, I have pondered that thought and wondered about its validity. At first glance, there’s something about that statement that just doesn’t seem right. I mean, isn’t love supposed to be 50-50? But upon further examination, I think my mother was right. As I reflect on my own marriage, I can see that it has worked as well as it has because Keen and I do just that.

I liken it to a circle of love. Think about it – if both people in the relationship direct their love toward the other one, then there will be a continual circle of love. When you give, you receive – and when you receive, you have something to give back to the other person. But when one or both of the parties is on empty, then the circle of love is interrupted – and that’s when we get into trouble. In fact, some of our biggest fights have happened just like that. One of us is lower than a snake’s belly, so we decide to retreat into self-pity – that arch enemy of love and harmony. Then we shut down and quit giving, feeling quite justified in doing so because, after all, we have it so rough. We become convinced that no one understands how hard our life is. The next thing you know, you’re engaged in a senseless argument about who has the more difficult lot in life. That’s a dangerous road to travel (don’t ask me how I know). The bottom line is: life is a struggle for most of us. Whether you’re rich or poor; whether you’re in the prime of your life or in your retirement years. Whether you are a stay-at-home mom or you work outside the home; whether you have a physically demanding job, or a mentally draining job – every job and every life has its challenges and drawbacks. On any given day, there isn’t a person alive who doesn’t feel like their job is the toughest. So why even go there? What is the point in debating that issue? Why not respect yourself as well as those you love? Let them know you appreciate what they do and tell them that you understand that their job has challenges and stresses that yours does not. There’s that circle of love again. I express appreciation to you and you return the recognition to me. That’s all anybody really wants. As Dr. Phil says, we need to become each other’s “soft place to fall.”

“We find rest in those we love, and we provide a resting place in ourselves for those who love us." ~ Saint Bernard of Clairvaux 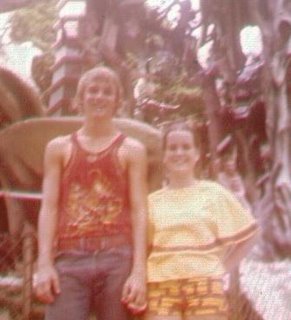 Keen and I (age 16) at the Botanical Gardens in Singapore 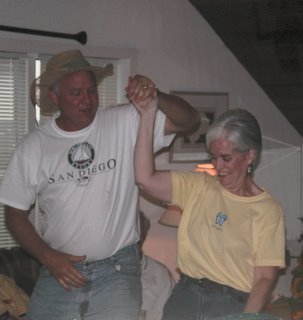 Keen and I kicking up our heels at the Van Kirk Family Reunion in 2003
Posted by Eileen Umbehr at 2:02 AM