The Lord said, "I am going to do something in your days that you would not believe, even if you were told." ~ Habakkuk 1:5 (NIV)

“Don't trust to hold God's hand; let Him hold yours. Let Him do the holding, and you the trusting.” ~ Hammer William Webb-Peploe

The inspiration for this week’s column came from a story I received from the latest edition of “Letters from Larry.”

A high school hired my friend George, an artist, to repaint the school mascot - a yellow jacket - on the football stadium wall. This was a difficult task because the painting was so large that the painter could only see a small portion of it at a time.

George had to stand a distance away in order to see the whole picture and give directions to another painter. If George's assistant had tried to paint according to his own limited perspective, seeing only a small part of the picture, he would have made a mistake. By following George's directions, however, he helped create an image that delighted the school’s sports fans.

Our life with God is something like George's view of the wall. As we face life's challenges, we are not in a position to see the whole picture – neither of the world nor of our own lives. We see only a small portion. If we rely only on our limited perspective,we risk calamity. Instead, we can choose to trust God - the One who sees the whole picture - to direct our efforts. If we do, God can work through us to create something delightful.

So many times in our lives we simply do not understand what is happening to us or why. That’s because we don’t see the big picture – but God does. I remember when Keen and I moved into a house owned by his parents; Jared was 6, Josh was 4 and Keener was a newborn. People would ask us how we liked the house and we’d reply, “Oh, its fine – but we won’t have a fourth child in it!” That was because the house was too small the day we moved in. Of course, we ended up eating our words when Kirk Van joined our family five years later – and he was four years old when we moved out!

The bigger the boys grew, the smaller the house became, and I honestly thought that I was in danger of losing my mind. Then, in an effort to comfort me, my sister Mary assured me that my feelings were normal. “They’ve done studies on rats,” she explained. “When they put too many in a small space they start to eat one another!”

The only thing that saved our sanity during those nine years was our weekly dates, when Keen and I would hire a sitter just to get a break. (A practice I recommend for all parents of young children!) In the meantime, we were always looking for a larger house, but never found one. So we decided to make lemons out of lemonade. Since Keen’s parents only charged us $150 per month in rent, it gave us the rare opportunity to build up our savings account in preparation for the day when we did find a larger house.

I distinctly remember crying on Keen’s shoulder one day about our cramped living conditions. He wrapped his arms around me and said, “I know, I know. It’s hard. But just when the answer seems the furthest away, it’s right around the corner.” And he was right.

One day in the fall of 1992, my father decided to surprise us with a visit. During his stay he expressed his dismay over the fact that we were living in such a small house. He also said he was worried about the house being a fire hazard. So he announced that we were going house hunting. I tried to explain that Keen drove up and down every street on the trash route each week and he would know if anything new came on the market, but Dad would hear none of that. I even tried to persuade him to go to a movie with me. “No!” he replied adamantly. “The only thing on my agenda today is: find you a house!” So I decided to placate him by going along with what I perceived to be an ill-conceived plan.

So Dad and I set out in the car and headed down the road past the courthouse into the country. As we approached a fork in the road, Dad asked, “What’s down this road?” So I turned the car and headed down the country road leading past the cemetery. Much to my shock and amazement, we came across a house with a “For Sale by Owner” sign. I seemed to recall checking into that house many, many years ago when the asking price was $125,000 (more than we could afford at the time). Keen and I had wanted to live in the country since 1979 when we left the busy metropolis of Minneapolis, Minnesota, as newlyweds and headed for Alma, Kansas.

Dad and I pulled into the driveway, walked up the steps and rang the doorbell. Ruth Say answered the door. After a brief introduction, I inquired about the specifics of the house and land. She explained that the house was built in 1972, it had about 2,800 square feet and the amount of land that went with it was just under 40 acres. So far, so good. Then I asked about the price. When she said $78,500, I thought I’d died and gone to Heaven. Apparently, the Says had dropped their asking price on the house incrementally over the past ten years since I had initially looked at it. So I quickly called Keen at work and he rushed right over, and we put money down on it that very day.

So while Keen and I were busy lamenting our fate in the small house, the price on the house God had waiting for us dropped nearly $50,000. In addition, we were able to save a substantial amount of money during that time – money that we desperately needed for the down payment and remodeling expenses. You see, the basement was only partially finished, so we finished that off with bedrooms and a family room for the boys. Then the carpet, which was multicolored green shag, had to be replaced, as did the linoleum and countertops. We also decided to add central air conditioning.

We ended up needing every bit of the money we had saved, and then some, to complete the job. In fact we ran out of money with the formal living room, which sat empty for several months since we didn’t want to go into debt for furniture. But God had that all worked out, too. At the same time, my father was moving out of his house into a smaller place and needed to get rid of the furniture he and my mom had owned during their married life. So he shipped two beautiful, nice quality couches, a coffee table, and two end tables directly to our new home. They not only fit in perfectly, but they have great sentimental value for me as well. Then, on top of that, my stepmother Barbara came for a visit and filled out the rest of the living room with lamps, tables, artificial plants and flower arrangements and an antique roll top desk which she decorated with unique little knick-knacks and antique books. And if that weren’t enough, my stepmother blessed our socks off when she surprised us with all new appliances! I’ll never forget the day I received the telephone call from Rosemary at Ed Marlings informing me that my stepmother had purchased a new microwave for our home. Well, I was totally shocked. As I was busy oohing and ahhing, Rosemary interrupted, “. . .And a new electric stove….” Again I started in with the oohs and the ahhs – and once again I was interrupted. “. . . And a new refrigerator . . . And a new dishwasher!” Keen and I hadn’t even planned to install a dishwasher, and we were just going to use the old stove. Plus, Barbara had already given us a new washer and dryer earlier! You can imagine how overwhelmed we are by all this generosity. (I know what you’re thinking, but she’s already taken!) Our years of famine were over. We were so thankful to God for blessing us with the house of our dreams, and we were so thankful to my Dad and Barbara for blessing us with everything we needed to fill it up!


"....as the Scripture says, What eye has not seen, and ear has not heard, and has not entered into the heart of man, all that God has prepared - made and keeps ready - for those who love Him ....." ~ I Corinthians 2:9 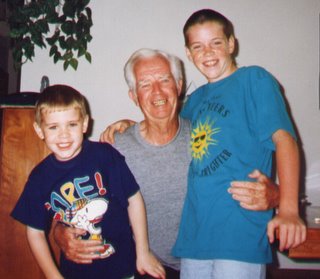 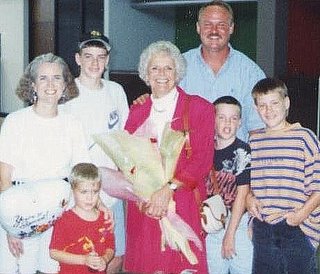 Meeting Grandma Barb at the airport in 1993
Posted by Eileen Umbehr at 11:48 AM