This week I’d like to share a poem about a Van Kirk Christmas past, which was written in 1997 by my sister-in-law, Connie, when she and my brother Bill and their four kids were living in Louisiana.

Connie titled her Christmas newsletter, “The Van Kirk Times.” I hope you enjoy it as much as we did.

I’d also like to wish all of you - my friends, family and “unknown readers” – many blessings of health, happiness, and prosperity this Christmas season and in the coming year. ~ Eileen

Our New Year started out with a bang, because on New Year’s Eve in Louisiana, fireworks everywhere rang.

A January outing to an amusement park is another story, where Kyle climbed high on Captain Hooks’ ship and cried out, “I FEEL THE GLORY”!

A special visit came from my Mom & Dad, with sightseeing & Mardi Gras parades, what a time we had!

For beads, toys & trinkets we’d say, “Throw me something, Mister!” It’s the biggest free show on earth for every brother & sister.

Joey had at first, a struggle to read, But almost overnight, he’s now in the lead!

My sister and family did visit for just one full day. A zoo trip in a forecast of rain was changed to sunshine, because we did pray!

Early March Spring planting was fun in a sleeveless shirt, just wish because of red clay, we didn’t have to buy all this dirt!

Luke played his trumpet and made honor band. He played as one of the best in the district, so let’s give him a hand.

On a river we did go with our local pastor, who loved to drive the boat faster and faster.

Except when the cruise ships came by, we submarined their waves and not a one of us was dry.

In April all 3 boys played baseball, playing through June, we were in for the long haul.

Luke started a business, mowing grass, and good for him the price was first class.

To the bank he did take half of his dough, he wonders now, where did the rest of it go?

What’s this bill I owe to the school cafe'? Why it’s Joey, who secretly decided to eat breakfast there everyday!

Bill received a promotion to level S-2, with all his hard work, 3M knew he was due.

High humidity & 90’s started early in May. And the first day of comfortable weather was still 5 months away.

Blueberry picking in June was quite a treat, the bushes were like trees, with large berries, abundant and sweet.

We had to soon travel far for a reunion with the VK clan, so we bought ourselves a ’95 Ford Windstar van.

For a Singapore school reunion came Bill’s sisters Eileen & Mary, fun and a whirlwind weekend of seeing classmates, some a bit too friendly – it was scary!

Just as I was about to breathe a sigh of relief, the baseball season went 6 more weeks with All-Stars - Good Grief!

A nice trip to Astro World in Houston with Renee, oh what could be the matter? It was hotter than blazes, the thermometers must have shattered.

Seeing Bill’s family in N.C. ocean shore made many memories to save, we all enjoyed seeing who could catch the biggest wave.

On this very trip the shocking news came, Bill’s key account is sold! Will his territory remain the same?

In August discussion of more territory, maybe a move? No move was the answer, so I focused on getting back in the groove.

The last weeks of summer reaped far more than I could bear! A 5-year-old girl cut short Callies’ hair!

Since I was due for a break, I went to a pampering party one day, to my surprise, a job offer came my way.

Come teach Spin Cycling at our health club (another dream come true), I took the job along with Aerobic Instructor Certification to pursue.

It was a busy Fall, with Luke and Joe in football. They both played center, hooray! Kyle in gymnastics, Callie in ballet.

The boys and I deep in our studies, some more news flashed. A transfer to Kansas City, our future here was slashed.

October brought Bill’s Dad to see us, He was quite a sport in all the scheduled ruckus.

At Thanksgiving we drove to see him, and the cup of hospitality he filled to the brim.

Mishaps of Joey’s sprained finger and Kyle’s black eye, I passed my Aerobic Exam, after studying so hard, I could die.

Kyle happened to lose four teeth in one week, he proclaimed, “Mom, I am on a losing streak”!

My friend, Renee, came to have a blast, and it felt like fun days we had had in the past.

We had such a blast you see, because Bill, he was baby-sitting for me.
To New Orleans we will soon say good-bye, it’s good news, yet makes me cry.

Bill will have a territory of five Midwest states, we will move the first quarter of 1998.

This holiday season we’ll drive to Minnesota to see y’all. COME TO OUR OPEN HOUSE FOR ONE AND ALL!

“For unto us a child is born, unto us a son is given: and the government shall be upon his shoulder: and his name shall be called Wonderful, Counselor, The mighty God, The everlasting Father, The Prince of Peace.” ~ Isaiah 9:6 (KJV) 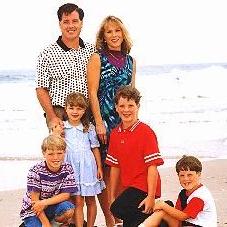 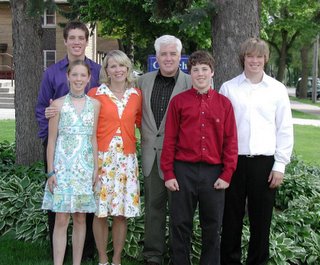