“If you knew you only had one more day to live, who would you call, what would you say and what are you waiting for?” ~ Anonymous

He said, I was in my early forties, with a lot of life before me,
when a moment came that stopped me on a dime.
I spent most of the next days, looking at the x-rays.
Talkin’ ‘bout the options and talkin’ about sweet time.
I asked him when it sank in, that this might really be the real end,
How’s it hit ya’, when you get that kind of news?
Man what did ya do?

And he said: I went skydiving, I went rocky mountain climbing
I went two point seven seconds on a bull name Fu Man Chu
And I loved deeper, And I spoke sweeter
And I gave forgiveness I’d been denyin’
And he said some day I hope you get the chance
To live like you were dyin’.

He said, I was finally the husband, that most the time I wasn’t.
And I became a friend a friend would like to have.
All of a sudden goin’ fishin, wasn't such an imposition,
and I went three times that year I lost my dad.
Well, I finally read the Good Book, and took a good long hard look
at what I would do if I could do it all again.
And then….

I went skydiving, I went rocky mountain climbing
I went two point seven seconds on a bull name Fu Man Chu
And I loved deeper, And I spoke sweeter
And I watched an eagle as it was flyin’

And he said some day I hope you get the chance
To live like you were dyin’.

Live like you were dying ~ recorded by Tim McGraw

“As for man, his days are like grass; as a flower of the field, so he flourishes.
For the wind passes over it, and it is gone, and its place remembers it no more.
But the mercy of the Lord is from everlasting to everlasting on those who fear Him, and His righteousness to children's children, to such as keep His covenant, and to those who remember His commandments to do them.”
~ Psalm 103:15-18 (NKJV)

The dawn of a new year always brings much introspection. We often look back with a mixture of satisfaction and regret and we look to the future with promise. We vow to eat better, exercise more and live life to the fullest. We hope… we pray…we dream.

The Dream
By Eileen Umbehr

The love, the joy, the laughter
Time has robbed us of these things
The endless pursuit of profit has filled every open space
What is left for all that is important?
Why must life be so backwards?
In my dreams, all is set aright.
Work becomes a bit player - just enough to survive.
Time to love - God, our children, each other.
Time to laugh…… Time to live…. Time to dream…..

I wrote that poem nearly ten years ago. Shortly after it was published in the poetry section of the Topeka Capital-Journal, I received the following note from my friend and long-time Alma columnist, Ada Sage Laverty. (From the Old Stone House)

My dear Eileen,
I have just read your sad little verse in the Topeka paper. You indeed have reasons to be sad, but the important things in life remain for you: a devoted husband and children, your green acres and your active youth - these are not just dreams. I, at 88, have lost all of these things, and I, too, am melancholy, so I do understand, but assure you that time and your dearest treasures, which remain, will bring brighter days for you.


Mrs. Laverty was right. I still have those things – and people – that matter most. And since none of us knows how long we have on this earth, it’s important that we cherish the time we have with those we love and be grateful for their presence in our lives.

Over the Christmas holidays, Keen, Kirk and I decided to drive 700 miles to Conroe, Texas to surprise Keen’s parents, Jim & Jean Umbehr. Keen’s sister Kihm was there from North Carolina and his brother Kevin and family live nearby, so we had an unscheduled Umbehr family reunion. We haven’t all been together since Josh & Lisa’s wedding a year and a half ago and it’s been even longer since we were all together at Christmas, so it was a very special time. Keen’s mom kept saying that having all three of her kids home for Christmas was the best gift she could have ever received.

On the day after Christmas, we decided to commemorate the Umbehr family gathering by having a professional picture taken at J.C. Penny’s studio. The traffic was crazy and the crowds at the mall were insane, but we were determined! It’s nothing short of a miracle that we were all color coordinated and actually looked like we were happy to be there! 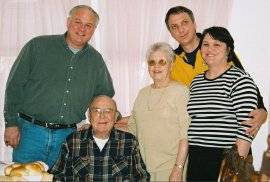 
During our visit, I came across an old book titled Heart Throbs – The Old Scrap Book, which was published in 1905. It belonged to Keen’s maternal grandmother, Mae Bartlett, and is a collection of stories and poems compiled by Joe Mitchell Chapple of the National Magazine, Boston, Massachusetts. Mr. Chapple ran an ad in The National Magazine asking the readers to send him “ . . .heart throbs – those things that make us all kin; those things that endure – the classics of our own lives.” He wrote: “Send me a clipping, a story, an anecdote, or a selection that has touched your heart . . .Wholesome good cheer, humor, comfort, hope – those things that make dark days endurable and sunny days enduring . . . Heart throbs – yes, heart throbs of happiness, heart throbs of courage, heart throbs that make us feel better . . .”

The following poem from Heart Throbs seemed to fit with this week’s theme.

How did you die?
By Edmund Vance Cooke

Did you tackle the trouble that came your way
With a resolute heart and cheerful?
Or hide your face from the light of day
With a craven soul and fearful?

O, a trouble’s a ton, or a trouble’s an ounce,
Or a trouble is what you make it,
And it isn’t the fact that you’re hurt that counts,
But only, how did you take it?

You are beaten to earth? Well, well, what’s that?
Come up with a smiling face.
It’s nothing against you to fall down flat,
But to lie there – that’s disgrace.

The harder you’re thrown, why the higher you bounce;
Be proud of your blackened eye!
It isn’t the fact that you’re licked that counts;
It’s how did you fight – and why?

And though you be done to the death, what then?
If you battled the best you could,
If you played your part in the world of men,
Why, the Critic will call it good.

Death comes with a crawl, or comes with a pounce.
And whether he’s slow or spry,
It isn’t the fact that you’re dead that counts,
But only, how did you die?


“The abundance of our lives is not determined by how long we live, but by how well we live.” ~ Anonymous

Posted by Eileen Umbehr at 1:32 PM