She sat alone on a bus out of Beaumont
The courage of just eighteen years
A penny and quarter were taped to a letter
And momma's goodbye in her ears
When you get lonely, call me Anytime at all

I'll be there with you, always
Anywhere at all
There's nothing I've got that I wouldn't give you
And money is never enough
Here's a penny for your thoughts
A quarter for the call
And all of your momma's love

26 Cents ~ recorded by The Wilkinson

Is there any job more difficult than being a parent? I’d like to know. Because either parenting is one of the greatest challenges you’ll ever face, or I’m just really bad at it.

I’m calling this column “Out of Control” in reference to the struggle I’m having with letting go of my youngest son, Kirk Van. Many tears were shed at my house this week, as Kirk found the courage to express his feelings on the subject. I’m sure it wasn’t easy for him to say and I know it wasn’t easy for me to hear. One of the things Kirk revealed during our conversation was that he felt like I was the driver in his car. Ouch.

You’d think by the time I got to son # 4 this would be old hat for me, but maybe that’s exactly why I’m having a more difficult time – because he’s my baby. But I have to realize that it’s not healthy for me to maintain a death grip on him in an attempt to control every aspect of his life. But somehow I have this notion that I’m not being a good mother if I don’t. I know in my head that it’s natural for kids (especially boys) to grow up and away from their mothers, but it feels very un-natural to my heart!

I was browsing through some of my old journals recently and I think I discovered the root of the problem. When my kids were little, it was my job to watch every move they made and to orchestrate every moment of their day from brushing their teeth and cleaning their rooms to telling them when it was time to do their homework or go to bed. It was a good thing back then, but those days are over now, and the transition can prove to be a difficult one. Case in point: I recall one of the boys tearfully explaining that he felt like he was old enough to pick out his own clothes. “It would be different if I was a baby like Kirk,” he said. “But I’m not a baby!”

So I’ve had to learn the hard way that if I continue to “mother hen” my child beyond the appropriate time, it will only create resentment and stunt his personal growth. As much as I like to be in control, the price is just too high. As a matter of fact, an alternate title for this week’s column was “Confessions of a Control Freak.” Just read the following memo I wrote to Josh when he was young and you’ll see what I mean.

This morning I found many items out of place in your room after you left for school. So many, in fact, that I was afraid I would forget them all if I didn't write them down. Here is the list of things that were out of order:

I am happy to report that your bed was made. However, in the future, please see that you complete more than one out of seven morning duties before you leave for school. Okay? Okay!

I love you,
Mom

Now here’s an excerpt from a family newsletter I sent out in 1992 talking about a different approach:

“Recently I’ve incorporated a new system to encourage responsibility and discourage irresponsibility. I have a chart on the frig for responsibility credits. Jared, Josh and Keen are the only participating members right now. When they do something like dishes or vacuuming without being asked, then they earn some points. When they do something like put raw eggs in the bottom of their brother's new roller skates (true story), then they lose some points. I can't get over how effective it is! They count their points often and are literally fighting over who gets to put the laundry away. They gladly welcome any new chore since it’s an opportunity to earn more points. "Who wants to mow the lawn?" "I do! I do! Hey, I said it first!" The other day Keener said, "Now every day is like a clean up day." I can't keep them busy enough. Eventually, we'll tally up the scores and it will translate into “x” amount of dollars.”

Being a mother is all I every wanted to be. In fact, when my brother Bill was born just 16 months after me, my mom said I acted like I was his mother! She said I never gave him a moment’s peace – I just followed him around everywhere he went. Even then I thought it was my job to be the mother hen!

As my children got older, I’d say the hardest part about letting go was allowing them to make their own choices, even if I didn’t agree with them. I had to keep reminding myself that God didn’t put a barbed wire fence around the tree in the Garden of Eden. He just told Adam and Eve what they could and couldn’t eat and left the choice up to them. So if God relinquished His right to control His children and gave them a free will, then I guess I should follow His example by doing the same with mine.

Roots and Wings
By Eileen Umbehr

Some people say,
there are only two things,
that you can give your children,
one is roots; the other, wings.

They'll have their share of ups and downs,
at times the skies will be bleak,
but we must allow them to spread their wings,
even if they bump their beaks!

It's hard to know when to let them go,
some are ready sooner than others,
but no matter when that time comes,
it's always hard on their mothers!

But deep down in our heart of hearts,
we have always known,
we can't keep them with us forever,
one day they will be on their own.

And we really wouldn't want it,
any other way,
we have to allow them to fly and be free,
even though we wish they could stay.

So we'll raise our children
with faith, hope and love,
and a prayer that God will watch over them
From Heaven up above.

Then when the time arrives,
for them to leave the nest,
we'll wave good-bye with a tear in our eye,
knowing that we've been blessed.

I’d like to close with an analogy about letting go that my uncle, Tom Lynch shared with me many years ago. I hope you enjoy it as much as I did.

The analogy of the kite to child rearing is apropos. You receive a lovely kite. A kite’s destiny is fulfilled only when it flies. You must try to get it to fly.
You fashion a tail, to guide it, from your own experiences and the advice of more experienced kite flyers. The tail must be well done, not too inconsequential, not too burdensome – enough to keep it pointing in the right direction and to aid its flight. You may have to modify the tail a few times to get it right.
To control the pretty kite, you attach a string. You, as parents, hold onto the string and the kite, by turns. Alternately, you run with it to get it airborne and to keep it aloof. It begins to fly, albeit jerkily at first. You let out more string or take some in – thoughtfully, carefully. You judge the winds and urge your winsome kite to rise higher. It crashes a few times, hopefully not doing too much harm.

Eventually, your shining kite begins to go up, up and away, forever pulling as you let out more string. It is buffeted by the winds of fate; it twists and turns high in the sky. You are anxious. Do you let out more string or reel some in? You have many discussions as to what is best. The string is so tenuous the farther away the kite sails.

The kite tugs harder, increasingly. It wants to be on its own. Too soon (only a few years, really) it breaks the string and soars off alone. Your beautiful kite is free! Would you want otherwise? But it is heart wrenching.

As the years go by, you will often question yourselves about the kites you were entrusted with. Did we fly our kites well? Were our guiding principles worthy? Did we exercise enough control or too much?

It is the subject of much retrospection, between the kite flyers, as they grow old together. 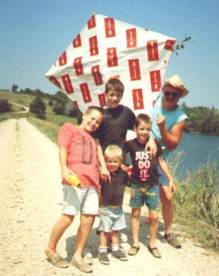 Keen & the boys with homemade kite
Posted by Eileen Umbehr at 5:31 PM