And that these days should be remembered and kept throughout every generation, every family, every province, and every city…” ~ Esther 9:28

To say that my dad, Joe Van Kirk, is a big believer in family reunions is a major under- statement. Even though there were nine kids in my family, Dad really wants us to get together each and every year. And he puts his money where his mouth is, too. Dad pays for the lodging; we just have to cover our transportation and food.

While I was preparing this week’s article, I came across this poem my niece Peggy wrote for my dad about three years ago.

Ode to Our Grandpa

It happened once upon a time
In a land so far away,
There lived a handsome man named Joe,
A “bat” kept women at bay.

Finally he settled down,
Not an easy thing to do,
He managed to support nine kids
But something grew up, too.

Phone bills racked up way too high,
Something must be done!
Annual reunions sound real good,
With lots of family fun.

And so began a great tradition,
From Wisconsin to Chelan,
A birthday, a fire, a jet ski ride
A play and a real nice tan.

Uncle Jim stealing water tubes
And Nikki “clowning around,”
The trademark “sisters’ laugh”
And Ishkabibbles- what a sound!

Looking from the outside in,
It may not seem so great
But we all know it’s obvious,
The Van Kirks are first rate!

Now, I’ll have to explain the line about “ishkabibbles.” When we were growing up, we had a family cheer that we would shout out whenever our dad came home from a business trip (or any other time of celebration). It went, “Ish-ka-bibble, ish-ka-bah – Daddy Van Kirk, rah, rah, rah!” (The tradition continues at our home now, too). My mom’s only sister’s family had a cheer, too. Their last name is Lynch so their cheer was, “Inchy winch, inchy winch – Hurrah, hurrah, hurrah for Daddy Lynch!” Every Easter we would visit them at their home in Decatur, Illinois and I can still remember the battle of the cheers that took place on their front lawn before we all loaded into the station wagon to head back to Wisconsin. There were nine of us and only five of them, so the Van Kirk kids had an advantage over the Lynch clan in the shouting contest.

Each year one of us takes our turn planning the family reunion, and generally it’s held in the vicinity of that family’s home. Since we’re scattered all over the United States, it makes for some pretty interesting vacations. This year the reunion took place in Virginia Beach, Virginia and was hosted by my youngest brother Bob and his wife Christine. We rented three large homes right on the beach and had a really great time. The waves were a little too rough for me, so I only went surfing with a boogie board one day.

Keen and several other brave family members rented a deep sea fishing charter boat and caught a 71 lb. tuna! They had it professionally cleaned and it was enough to feed all 40 of us. My brother-in-law, Jim Reese from Des Moines, broke a record with a 29 lb. Mahi-Mahi he caught. They’re going to send him a plaque and everything.

We usually celebrate several birthdays at the reunions – especially when someone reaches a milestone. But since my dad’s birthday is August 24th (he is 79 this year) we celebrate his birthday every year. Another birthday we usually end up celebrating is our sister-in-law Cindy’s, because it always falls during the week of the reunion. This year I wrote a poem that pretty much describes the kind of person Cindy is.

Her name is Cindy, she’s our sister-in-law
And boy am I ever glad
She’s just such a gem and on top of that -
She gave us two nieces and one lad!

Cindy came from a small family
Just her parents and one lone brother
But the man that she married had eight siblings
Now that’s a horse of a different color!

As you can imagine, it was quite an adjustment
for this quiet lady to make
But in no time at all she was one of the gang
A risk she was willing to take!

She’s the cream of the crop and we all adore her
perhaps because she loves our brother, Joe
Or maybe we just appreciate the fact
That she’s willing to let us steal the show!
But to tell you the truth, she’s adjusted quite well
to the fact that we’re a family of hams
In fact, another reason we all love her so much
Is cuz she’s one of our biggest fans!

It’s hard to do her justice in this one little poem
There’s so much that makes her stand out
She’s a wonderful sister, mother and wife
She’s one in a million - without a doubt!

All in all we had a wonderful time, sharing old memories and making new ones. And even though Keen and I don’t make it to the reunion every year, we definitely recognize and value the bonding that takes place with those we love so much.

I’d like to close with a poem written by Diantha Zschoche from Vista, California.

Family Gatherings
The high pitched chatter of toddlers
The noisy silence of adolescents
Masks of boredom hiding twitching ears
The occasional red faced pleas of “Oh, Moms….” And “I did nots…”
The low rumblings and cackled laughter of varied generations
as recollections of years gone by compete, then harmonize
with choruses of “Yes, I remember when…”
and “You should see….” Abounding
Laughs and frowns and smiles and grimaces grace the faces
blurring together in flip book fashion,
as people mill about playing musical chairs and rooms
linked by blood and history. 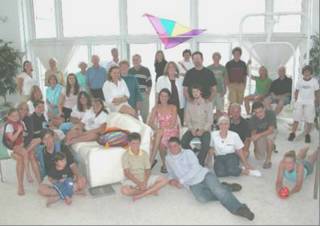