Alice Lucas was born, the oldest of four
On a farm west of Silver Lake
Her brothers were Richard, Wayne and Paul
Her parents, Harry and LaVerna May

One interesting note, ‘tis true, and I quote
Alice’s ancestors on her daddy’s side
Came to America from England
On the Mayflower they did arrive

Mama ran a hotel, where Alice and Richard would dwell
But the two never ventured upstairs
‘Twas not ‘til years later, their Mama found out
Someone told them the Boogie man lived up there!

Back in those days, Nehi pop was the craze
For them this treat was quite rare
So Richard would get strawberry and Alice would get grape
Then back and forth a taste they would share

When Nelson Wayne came along, he was healthy and strong
A bundle of joy to have and to hold
But that wasn’t the case with Mama’s helper, Miss Johnson
Whose hands and heart were both cold!

Everything was fine, until that moment in time
In ’33 when things all went downhill
What with the depression, the drought, heat and floods,
If it wasn’t the hogs it was the windmill.

In ’36 Paul arrived, through the flood he survived
And became a happy-go-lucky lad
Even though Richard teased, prodded and poked him
He just couldn’t make young Paul mad!

Sunday mornings were fun, the kids would all run
To jump in bed with Papa and Mama
They read Dick Tracy, Slim Jim and Orphan Annie
Enjoying the funny papers in their pajamas

Mama canned and dried, from the land they survived
When making ends meet was hard
Mama made sauerkraut and traded mending for squash
In the big open kettle Papa rendered lard.

But they also had treats, gingerbread they would eat
And devil’s food cake made from scratch
They raised watermelon, cantaloupe and Concord grapes
And picked strawberries from the garden patch

Now and then they’d get hurt, at play or at work
Like the time Alice fell down the stairs
Or when Wayne fell off his pony while riding
And the pony promptly stepped on Wayne’s ear!

But sometimes a disease, was much more than a sneeze
There was malaria, measles and pox
Then an epidemic of scarlet fever
And Richard and Alice both had whooping cough

Another problem they had, which sounded so bad
Were dust storms that made day look like night
And grasshoppers the kids had to chase away
To keep them from eating everything in sight

Most her life Alice worked, as a retail clerk
And she made the choice never to marry
She enjoys writing and painting ceramic dishes
In the garden she likes to tarry.

In fact, most of these tales, a lie I can’t tell,
Came from Alice’s handwritten life story
With the help of Richard’s daughter Nancy
She is preserving her family’s history

But her favorite pastime of all, is really a ball
Alice likes to plan virtual trips
With a map and some info from Triple A
She records journeys to places of interest.

So if you ever want to wander – over hill, dale or yonder
Just tell Alice where you want to go
Then she’ll create the vacation of a lifetime
And you’ll never have to leave your front porch! 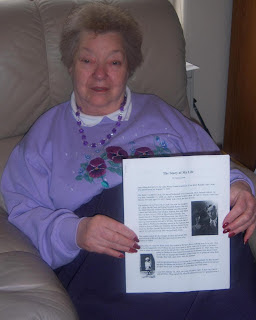 Alice holding a copy of the story of her life

Note: Alice was born in 1926 on a farm west of Silver Lake, Kansas, located about 3/4 of a mile from the river. When she was 11 days old, they moved into a new house her father had built for the family. When she was four years old, their old home, which was used for storage, caught fire. Alice said that all the neighbors and "half of Silver Lake" showed up with buckets to help put the fire out.