Yes, and joy was just the thing that he was raised on
Love is just the way to live and die
Gold is just a windy Kansas wheat field
And blue is just a Kansas summer sky

It is a beautiful Sunday in December as I sit down to pay tribute to my late father-in-law, Jim Umbehr. My only prayer is that I will be able to do him justice.

My father-in-law was born on October 20, 1929, to Keen Sr. and Augusta Ann Umbehr. The name they chose to give him was simply Jim. Not James, just Jim. Legend has it that his paternal grandmother, Ida Umbehr, took umbrage with the fact that little Jim wasn’t named after someone in the family the way his older brother Keen had been. So Grandma Ida took it upon herself to endow him with the unofficial middle name of Alfred, after her husband and Jim’s grandfather. So when the local newspaper would report on the comings and goings of families in the Alma area, young Jim was referred to as “Jimmy Alfred.” In fact, Jim himself was reportedly 32 years old before he obtained a copy of his birth certificate and discovered that he didn’t actually have a middle name. Years later, when we decided to give our second son his grandfather’s name for a middle name, we named him Joshua Jim Umbehr, instead of the more traditional form of the name – Joshua James.

Jim’s father Keen was a construction engineer who bid on various road construction jobs all over the country. This meant that the family of four moved around quite often. In fact, Jim was born in Seymour, Texas, and his brother Keen was born in Hutchinson, Kansas. Many times they would start school in one city and finish it in another. Jim even spent one year of grade school living with an aunt in Stafford, Kansas. (Little did he know that one day he would meet his future wife there.) But that all stopped when Jim was about nine years old and his parents decided to put down roots in Alma. His paternal grandparents, Alfred and Ida, had been one of the first settlers to the area, and Grandpa Alfred owned a variety store on Main Street. The family bought a farmhouse with some acreage on what is now known as Illinois Creek Road.

Jim’s father sadly passed away unexpectedly at the age of 48. Apparently, he suffered a fatal heart attack while building a stone fence. Jim was only 17 years old at the time. After Jim’s brother Keen graduated from Kansas State University with a degree in geology, he and his wife Helen took up residence in the family farmhouse and began farming the land and raising livestock and crops. Together they had three children; Jack, Iris, and Carol. (They now have five grandchildren and one great-grandchild.) 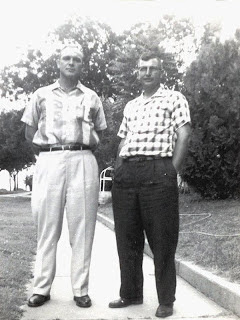 After graduating from Alma High School (now Wabaunsee High), Jim attended Kansas State University and joined the R.O.T.C. He also attempted to join the Army, but when they discovered that he didn’t have an eardrum in one ear, he was turned away.

Jim later found work in the oil industry, which eventually led him back to Stafford, Kansas, where he would meet a beautiful nursing student by the name of Doris Jean Bartlett. Jean was living in the nursing dorm when handsome Jim Umbehr arrived to pick up another girl for a date. Unbeknownst to Jim, his date had asked the other girls to make up an excuse for why she couldn’t come downstairs. When Jim realized he had been stood up, he looked around and asked if anyone else would like to go across the street and have a soda with him. Jean said that she’d like to go, and they hit it off right away. Several years later, on the twelfth day of the twelfth month, 1953, Jim and Jean Umbehr became man and wife. This past Tuesday would have been their 53rd wedding anniversary. 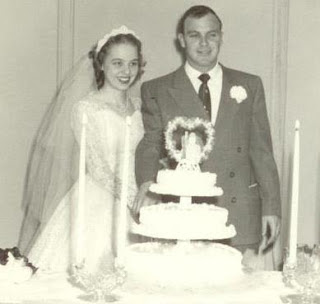 In a previous column written for Mom and Dad’s 50th anniversary, I wrote about the adventurous life they led, traveling all over the world with Jim’s job as a salesman with an oil company, Dresser Industries. Together with their three children, Nancy Kihm, Keen Alfred, and Kevin Bruce, they lived in Africa, Singapore, and London. (Mom and Dad used to joke about how they would have gotten divorced a long time ago, but neither one of them would take the kids.) From those three children, they now have nine grandchildren, four great-grandchildren, and one more on the way in February. (With many more still to come, I’m sure.)

Last May, Dad began having some problems, and the doctors discovered a cancerous tumor on his ureter, which connects the kidney to the bladder. The tumor was removed and later identified as Stage 4 sarcoma. At that time, the doctors believed they got it all, so they did not recommend chemotherapy or any other kind of additional treatment.

Keen and I saw Dad over the summer when he and Mom came for a visit. Thankfully, he was able to meet his great-granddaughter, Katelyn Seraphina during that visit. 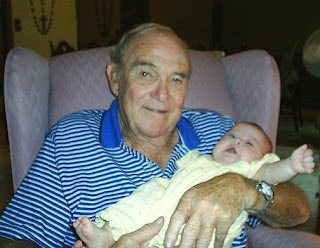 (He and Mom had already met Emma Eileen earlier in the year when Erin and the boys had a layover in Houston.) 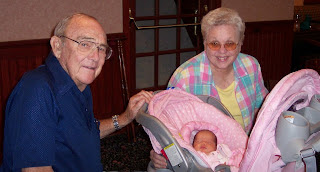 During that time, we noticed that Dad was becoming short of breath and would tire easily, but other than that, he seemed to be doing fairly well. Then in the fall, he began experiencing some other problems, including severe pain in his back. Since Keen’s sister Kihm had moved to Texas about a year ago, she was able to offer much-needed support to Mom and Dad throughout all the months of tests and appointments while the doctors tried to figure out what was going on. (Of course, Keen’s brother and his wife Falethesa have always lived near the folks, so they have provided an immeasurable amount of help and support over the years.) As recently as August, the bone scans did not reveal any signs that the cancer had spread.

Keen and I made plans to visit his parents at Thanksgiving. I flew down a couple of days early because Keen’s sister and mother had offered to help me with my Christmas card mailing. (As it turned out, Keen’s brother, wife and daughter Valorie pitched in, too.) 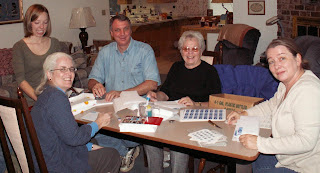 When Kihm picked me up at the airport, the first thing she told me was that there had been a noticeable difference in Dad’s condition over the previous three days. She said all he wanted to do was sleep. In fact, he was already in bed by the time I arrived, so I didn’t see him until the next morning at breakfast. As he walked into the living room ever so gingerly with Mom on one side and Kihm on the other, it was difficult for me to contain my shock. His face was ashen and his body, thin and frail. “Eileen is here, Jim,” Mom announced. Dad slowly lifted his head, and after spotting me across the room, he greeted me in a raspy voice. “Hi, Sweety.” I tried to keep my composure while I gave him a big hug and told him that I loved him. Then he kissed me on the cheek and said, "Love you, too." At that point, my emotions got the better of me, and I had to leave the room. I was simply not prepared to see how much Dad’s health had deteriorated since this past summer. It was just so hard to see him that way. When I found my mother-in-law in their bedroom at the back of the house, I broke down and cried. “I feel like I’m looking at a dying man,” I said as we hugged each other.

Shortly afterwards, Dad was sitting up at the kitchen table and he told Kihm that his back hurt. Then he looked up and said, “I guess that’s just part of it.” Kihm gave him a pain pill along with his other medications, and then she helped him eat his breakfast. “I want to go back to bed,” he said to anyone who would listen. “I just want to stretch out for an hour or so.” Kihm explained that he could get pneumonia if he stayed in bed all day and didn’t sit upright. After hearing this, Dad looked down at the floor and shook his head dejectedly. Then Kihm slowly helped him to his recliner in the living room.

Later on while Kihm and Mom were busy getting ready to take Dad to his doctor’s appointment, I knelt down by my father-in-law and rubbed his arm. “How are you doing, Dad?” I asked. With the saddest eyes I’ve ever seen, he seemed to be pleading with me. “I want to go back to bed.” “I know Dad,” I replied apologetically, “but they said you can’t.” With furrowed brows and a hint of indignation, he asked, “Who says I can’t go back to bed?” I told him that Kihm and Mom did. “Why can’t I go back to bed?” “Because they don’t want your lungs to fill up with fluid, Dad, and they’re both nurses, so they know what’s best for you. I’m sorry.” In a voice not much louder than a whisper, he repeated his desperate plea, “But I want to go back to bed.” It broke my heart to see my father-in-law suffer like that; this kind, gentle, generous, unassuming man whom I had known and loved for over 30 years.

While Kihm and Mom took Dad to the doctor for a bone scan, I stayed back to get started on my Christmas card mailing. When I turned my cell phone on, there was a jovial message from Keen waiting for me. He said he just wanted to make sure that everyone was working hard and not slacking off on the Christmas card assembly line. “Don’t be afraid to crack the whip if you have to,” he joked. I knew that I needed to prepare him, so I called him back right away. “Keen, I have to warn you,” I said. “This is not that kind of a trip. Your father has taken a drastic turn for the worst.” Then I called our son Josh, who immediately offered to drive to Texas with his dad. Apparently, Josh and Lisa had already talked about the possibility a few nights earlier, so Josh knew that Lisa would be all right with the idea. So Keen cancelled some appointments and Josh’s father-in-law Gary agreed to drive to Kansas City to baby sit Katelyn while Lisa was at work. Josh and Keen were on their way to Texas later that same afternoon, and they arrived the following morning. Even with the advance warning I had given him, Keen was shaken by his father’s physical appearance and weakened condition. 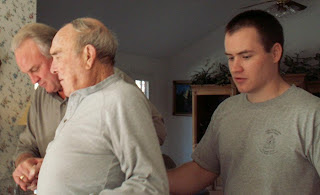 “We are given nine months to prepare to be born, but no one prepares us to die." ~ Patricia Van Kirk (my late sister) 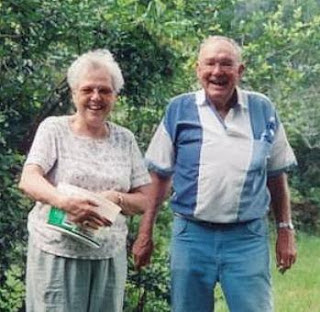 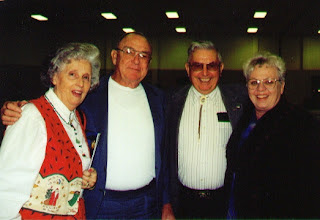