“Just one more thing before you leave,
Don’t forget to remember me.”

“Don’t Forget to Remember Me” ~ recorded by Carrie Underwood

“Don’t forget me.” Those were the last words I ever heard our dear friend Quentin Katt say before he lost his battle with cancer one year ago. Quentin passed away on his 72nd birthday, September 13, 2005.

Keen and Quentin met when they were both serving on the Alma City Council, and they became the best of friends. During those stressful years when we were fighting with the County Commissioners and throughout the lawsuit, Quentin Katt was one of Keen’s only friends. Before Quentin died, I had the chance to thank him for being there for Keen during those difficult times. He replied, “I always said, ‘he was my friend.’”

Quentin had a shop with a television and an easy chair out in the garage at his house. It was a place where Quentin’s friends were welcome to drop by and sit a spell anytime. They could always find Quentin in there smoking his pipe. Speaking of which, I’ll never forget the time Keen took our youngest son Kirk across the street to visit Quentin during half time of a Wabaunsee High School basketball game. Apparently, Kirk asked Quentin if he could puff on his pipe, so Quentin let him. I was taking tickets by the entrance that night, and I’ll never forget my little son running towards me with excitement in his voice saying, “Mommy, Mommy! Quentin taught me how to ‘moke!”

Quentin enjoyed the simple things in life, but he was anything but simple. He and Keen would often have deep philosophical conversations. When it came to politics, they couldn’t have been more opposite – but that’s what made their conversations so lively and stimulating. Quentin’s shop was a safe place for Keen to go and let off steam. Quentin was always there to lend an ear and offer a word of sage advice.

Keen learned so much from Quentin. One of the things he learned was a lesson contained in Quentin’s favorite poem – a poem titled “Outwitted” by Edwin Markham,which was published in the program for Quentin’s memorial service.

Quentin and his wife Aleta raised six wonderful children; three boys and three girls, who are all living happy, successful lives and raising children of their own. Their daughter, Diana, became a doctor and returned to her hometown to establish a medical clinic.

Quentin’s philosophy of life was described in a wooden plaque that hung on the wall of his garage. “He who dies with the most gold still dies.” At his memorial service, Quentin’s son mentioned that some of his dad’s most cherished possessions were artifacts Keen Umbehr found on his trash route.

I’d like to close with this poem written by William Karnowski, a poet and author from Wamego, who graciously gave me permission to share any of his writings in my column:

Dad
By William J. Karnowski
(From his book of poetry titled: Pushing the Chain)

When HE dies
Then YOU believe
It.

When your father is alive,
You hope he really
Is immortal.

When he dies,
You are sure
You are not.

The sad thing is this;
If you are a good man,
When you die,

It will break
Your son’s heart.
I am sure.

Forget you, Quentin? Not a chance! Until we meet again, old friend, we will be remembering you. 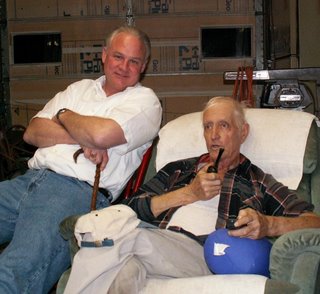 Keen and Quentin's last visit (on our porch) 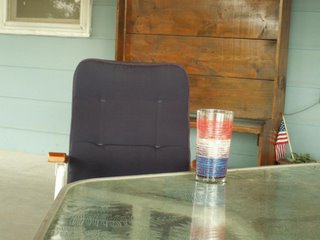 The Empty Chair
Posted by Eileen Umbehr at 8:08 AM