A Day in the Life of a Trashman

Last week I wrote about leaving a legacy and the importance of recording your thoughts and feelings for future generations. If you’d like to listen to some short stories recorded by ordinary people, check out www.storycorps.net and click on “Listen.” Story Corps is a project that was developed to inspire people to record each others’ stories in sound. To facilitate this goal, a sound proof booth has been placed in the middle of New York City’s Grand Central Terminal. This gives individuals the opportunity to share a special memory with someone they love. The story is then recorded on CD and archived in the Library of Congress.

Lately I’ve been spending the majority of my time on book revisions, so I thought I would share a section of my personal journals with you for the next two weeks. This will give you a glimpse into “a day in the life of a trashman” – and it will give me the chance to focus on my project.

“And may the Lord make you to increase and excel and overflow in love for one another and for all people, just as we also do for you.” ~ I Thessalonians 3:12

“When the wire gets so tight that you can walk on it, that’s when the walkin’s the best.”
~ Garth Brooks

Today is Friday, January 21, 1994, and Keen and I are in St. Louis, Missouri, picking up our new trash truck at Armor Equipment. We flew in but we’ll drive the new truck back. Our salesman, Larry Jackson is explaining how the truck works to Keen. It’s freezing outside so I decided to sit in their company truck and write until they’re done.

This has been an incredibly wild week. I’ve been calling it the week from hell; in actuality, it may prove to be the week from Heaven. It has never looked as dark or bleak as it did this week.
It started last Thursday, January 13, when Keen’s trash truck broke. Danny, Quentin, Dave and Keen worked on it all day Friday. Keen drove to Topeka for parts, but they didn’t have everything he needed. So he had to drive back on Saturday at 8:00 a.m. to pick up the rest of the parts.

So I called Barbara and I told her about it. We visited until Keen came home and then he talked to her. He said, “Yeah, I am sad, Mom. It’s just been so hard for a very long, long time….too long it seems.” So she talked to him about how important it is for him to get those feeling out. It really helped to talk to her.

Then Keen went to bed at 9:00 and he asked me to have the boys come up and sing him a song. It was so sweet to hear them all in there singing “Chantilly Lace” to Dad. Then Keener (age 9) stayed back to talk to his daddy. He told him he felt sad that Dad was never home. So Keen told him he’d wake him up at 4:00 the next morning to go with him to get parts in Topeka. When Keener came out of the room I noticed he was crying and I asked him about it. He told me how sad he was because he never gets to see Daddy. I held him on my lap and I cried right along with him. I said, “I know, Keener. We’re all sad about not seeing Daddy. It is sad.” Little did we know how much worse things would get before they would get better.

Keen worked all day Saturday trying to repair the truck in time for Sunday’s route. I thought to myself, “Keen works trash man hours – from before sunup until after sundown.” He got home around 7:00 Saturday night believing that the job was complete and the problems were solved. When he came home he said, “One day I know God will deliver me from all of this, but for right now He’s giving me the strength to do what I have to do.”

On Sunday morning he left the house at 8:00 a.m. so he could hopefully be home by 3:00 to watch the Chiefs play Houston in the playoffs. Well, he was home by 3:00 all right, but when he walked in the door he announced that he hadn’t even left town yet. His truck barely made it to the landfill and back before it started making a terrific loud noise. Then he worked on it all day until 3:00. He couldn’t go any further with everything being closed on Sunday. He said he went into his office and just broke down.

On Monday morning Keen called home and said, “Well, hon, we don’t have a trash truck.” I was shocked. He told me he was trying to find a loaner. I felt like our whole world had just come crashing down. Suddenly, everything came to a screeching halt. Tuesday was staring us in the face, as was Wednesday and the rest of the week. We found ourselves facing some enormous decisions.

Several attempts to locate a loaner were unsuccessful. One trash truck was available for rent for $500, but it was fourteen hours away. We called every dealer we knew but the only one who had a truck on the lot nearly ready to go was Armor Equipment in St. Louis. They were just finishing up on a 1994 International with a 20-yard Heil compactor. So then we began the long process of obtaining financing. The truck would cost approximately $90,000 dollars. We always knew that a new truck purchase would eventually become necessary, but now it had hit us square in the face. It became quite evident that, after thirteen years, we had gotten all the good we were going to get out of our old truck.

The most frightening aspect of this purchase became the monthly payments. Keen and I knew we were doing the right thing by proceeding forward with the purchase, but neither of us had any idea how we were going to make such a huge payment. We haven’t had a truck payment for the past nine years, and lately we have been struggling to make ends meet. Now how would we come up with $1600 each and every month? It felt as though we were walking into an abyss. We kept marching, but with absolutely no idea how it was going to work out on the financial end. But since it was our only option, we were left with no choice but to proceed by faith; believing that everything would be all right, even though we didn’t have all the answers – or any answers, for that matter.

On Monday night, Keen had to go all the way to Mission Valley School near Eskridge to pick up their overflowing trash, so I told him I’d go with him. Since the trash truck was broken, we had to take the Pak-Rat, which is much smaller and doesn’t have a hydraulic lift to empty commercial dumpsters. It was the coldest day of the year with subzero wind-chill and blowing snow. I didn’t want him to go alone. The world seemed to be falling down around him and I wanted to be by his side to offer my support. I wanted us to go through this trial side by side. So we did.

At the Eskridge Manor I had to climb inside their oversized, 8-yard container to hand the bags to Keen. It was freezing! I felt so sorry for Keen. He said, “You have to learn to work with frozen fingers.” But it felt good to help out and pull together in this trial and tribulation. On our way home, I was especially thankful that I went along as Keen started dozing off and nearly drove right off the road. Still, our trials had only just begun. 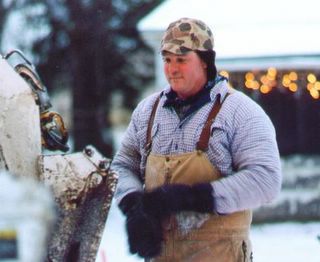