"But call to remembrance the former days…"
~ Hebrews 10:32
Remember when ~
Thirty seemed so old
Now looking back,
It's just a steppin' stone
To where we are,
here we've been
Said we'd do it all again ~
Remember when

Lyrics to "Remember When" ~ performed by Alan Jackson

This year's annual Van Kirk reunion took place near Brainerd, Minnesota at a wonderful family-owned resort called Ruttger's Bay Lake Lodge (www.ruttgers.com). All nine of us were there, traveling from as far away as Nevada, Seattle and Virginia. It was an extra special reunion on several fronts, but primarily because we were celebrating our father's 80th birthday which falls on August 24th. (More about that in next week's column.)

In the middle of the week, Keen and I decided to take a road trip to our hometown of Hudson, Wisconsin. My father's job with 3M required us to move quite often, so very few of us were even born in the same state. I was born in Cincinnati, Ohio, for instance, and we later moved to Edina, Minnesota. The next stop was Hudson, where we lived for the longest stretch of time - eight years before being transferred overseas to Singapore.

I have so many fond memories of the years spent growing up in the quaint little town nestled near the St. Croix River on the Minnesota border. My parents built a seven bedroom house at the bottom of a winding road called Proehl's Trail. It was named after the Proehl sisters - Ida, Sophie and Mag, and if my memory serves me correctly, only one of the sisters ever married. I became close friends with Mag and enjoyed many visits in her home. In fact, I still have the antique paper weight she gave me when I was a young girl.

Proehl's Trail, or Proehl's Point, as it is sometimes called, was a dead end road that circled around Lake Mallalieu. Our house was built right on the waterfront, which provided year around entertainment for the whole Van Kirk family - and all of our friends! In the summer we swam, fished, canoed and water skied. In the winter we skated, ice fished and went sledding on the hill in the woods behind our house.

From the moment Keen and I crossed the city limit sign into Hudson, my childhood memories started flooding back - beginning with the Dairy Queen on the edge of town. That was where my sister Peggy used to take me every year for my birthday. She told me I could get anything I wanted, but I always ordered a butterscotch sundae. It was such a treat! I'm sure Keen was a bit puzzled when I asked him to pull over and take a picture of me in front of the Dairy Queen. It was the first of many pictures I would ask him to take during my walk down Memory Lane.

Hudson has grown considerably since we lived there when the population was only about 5,000. I'm not sure what it is now, but as we drove down Main Street, I barely recognized it. The only storefront that jogged my memory was Sandeen Insurance, which has been owned and operated for over 50 years by the Sandeen family, our close friends and former neighbors. I also recalled the corner pharmacy, although I think the name has changed.

We managed to find our way to St. Patrick's Catholic School, where I attended school from 2nd grade through the 8th grade. What a blast from the past! There was Sr. Cornelius' music room - she was the only nun who wore a white habit. I remember how she called my mom to report that I was "crisscrossing" the suspenders on my plaid uniform in order to make my pleated skirt a little shorter. She used to get the ruler out and measure the distance between the bottom of my skirt and my knee.

Our next stop was the old home place on Proehl's Trail. The current owners, Herb and Karen Till, are long time family friends, and were nice enough to offer tours to any member of the Van Kirk family. So we decided to take them up on their generous offer. Tears filled my eyes as I walked from room to room through our former home. In my mind's eye I could just picture all of us running down that wooden staircase on Christmas morning into the living room filled with gifts. 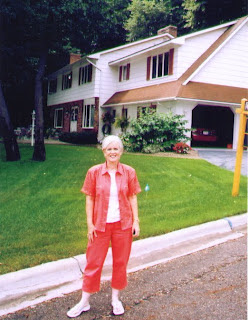 The kitchen brought back memories of all those dinners spent talking and laughing around the table. My Dad used to constantly remind us to keep our elbows off the table. He'd say things like, "Your napkin fell on the floor" to get us to put our napkin on our laps. After dinner I remember how all nine of us would yell, "I scream! You scream! We all scream for ice cream!"

The corner of the kitchen, on the other hand, brought back some not-so-pleasant memories of time spent on my knees on those hard ceramic tiles as punishment for fooling around in church!

Even the intercom system brought back memories. It was piped into each of our bedrooms and every button was labeled accordingly. There was one master button that went to every room in the house so when it was time for dinner, Mom just pushed that button and made one mass announcement.

It was especially sentimental to see my old bedroom and look out the window at the same view of the lake I used to see when I would do my homework at my desk. But the most nostalgic moment of all came when Karen showed us a forgotten memory inside a built-in planter by the staircase leading to the basement. There, etched in the cement, were the names of all nine kids - Peggy, Patty, Connie, Joanne, Joe, Mary, Eileen, Bill and Bob, as well as Mom, Dad and Nanny - our maternal Grandmother.

Coincidentally, the house is currently up for sale. My brother, Bill and his wife, Connie and their four kids toured the house after the reunion and are actually considering buying it. Connie's entire family lives in Minnesota, so they would really like to live closer to them - and the rest of us would love nothing more than to be able to visit our old home in Hudson once and awhile. My idea was for us to buy it as a permanent location for the annual Van Kirk reunion! In any event, we are all storming Heaven in hopes that we can reclaim our family homestead one way or another.

On our way home, Keen and I stopped at a hospital in St. Paul to visit some dear family friends, George and Pidge Lindner. (They were married in Salina, Kansas, right before he went off to war.) Mr. and Mrs. Lindner were frequent dinner guests in our home and they were always our favorites because Mrs. Lindner used to bring us bags and bags of candy. Whenever we heard Mom and Dad were having a party, our first question would be, "Are the Lindners coming?" In a family of nine, sweets like that were a real rarity, so we would all be waiting on the edge of our seats for the Lindners to walk through the front door bearing treats for all. Mrs. Lindner always looked so beautiful. She was an impeccable dresser and her hair was perfectly coiffured. We thought she was an angel sent from Heaven. After we gave her a hug and thanked her over and over, we would scurry up the stairs to one of our rooms to divide up the spoils evenly. 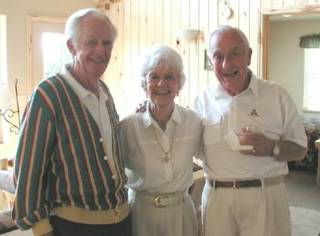 Sadly, unbeknownst to us, this time we would be saying good bye to our dear friend. We knew Mr. Lindner was ill, but we didn't realize how ill until we arrived at the hospital. Mrs. Lindner led me back to his room in the intensive care unit. I grasped his hand as she kissed him on the forehead and said, "George, Joe Van Kirk's daughter is here to see you." Mr. Lindner struggled to open his eyes and look at me. Then he clenched my hand firmly and shook it up and down repeatedly, as if to say, "I see you, I know you and I thank you for coming." I said, "We all love you, Mr. Lindner."

Before we left, Keen asked if we could all hold hands in prayer. So Mrs. Lindner, her daughter-in-law and Keen and I all stood in the hallway of the hospital while Keen prayed that God would give Mrs. Lindner strength and Mr. Lindner peace in death until he was welcomed home into the arms of Jesus.

Mr. Lindner did pass away peacefully the very next night, just one week before their 60th wedding anniversary. We were all saddened by the news, especially my father, who wept over the loss of his lifelong friend. It was a week of joy and sadness; celebration and sorrow. It was a week to remember.

"Finally, all of you should be of one mind, full of sympathy toward each other, loving one another with tender hearts and humble minds."
~ I Peter 3:8 (NLT)