Until We Meet Again

“Let not your heart be troubled; you believe in God, believe also in Me. In My Father's house are many mansions; if it were not so, I would have told you. I go to prepare a place for you. And if I go and prepare a place for you, I will come again and receive you to Myself; that where I am, there you may be also.” ~ John 14:1-3 (NKJV)
Somewhere out there,
if love can see us through,
then, we’ll be together,
somewhere out there,
out where dreams come true.

“Somewhere Out There”~ performed by Linda Ronstadt 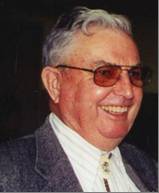 Last Saturday, January 3rd, our uncle, Keen Umbehr, passed away after suffering for a year and a half with complications from open heart surgery. His devoted wife of fifty plus years, Helen, has been by his side the entire time. Uncle Keen was 79 years old. He lived a full life, but it wasn’t long enough for those who loved him.

Keen was educated at Kansas State University as a geologist, and spent his life as a farmer and rancher. He was a loving father, husband, grandfather, brother, and uncle. Keen and Helen had three children; Carol, Jack and Iris. They have five grandchildren; three boys and two girls.

Keen was preceded in death by his son, Jack, who was fatally injured in a wood cutting accident on New Year’s Eve seventeen years ago. Uncle Keen was with Jack on the night of the tragedy, and I believe he’s with him again in a better place called Heaven.

About four years after Jack’s death, my husband, Keen, had a very vivid dream about Jack being in Heaven. He saw Jack standing by a horse in a beautiful green pasture. Jack had leather chaps on and looked so happy. Keen gave him a hug and told him he missed him. Keen described the scene as “Jack heaven.”

I still remember, the sound of the sirens
on that winter night so long ago
But I never imagined the person in need
would be someone that I did know

It was our cousin, his name was Jack
the night was New Year’s Eve
He was just about ready to call it a day
when he cut down one more tree

Jack was such a hard worker, holding down two jobs
he never left a project undone
But the most important roles he played in his life
were husband, father and son

Now his boy is a senior, soon to graduate
he’s bright and handsome, just like his dad
I know Jack would be so very proud
of the fine young man that he and Barb had

Jack has been missed – as cousin, brother and friend
and by countless other loved ones
But none miss him more, than those who knew him as
husband, father and son.

*********************
Today’s Bible verse tells us that mansions have been prepared for us in Heaven. But many wonder how we can know whether we’re going to Heaven. Well, I’m not a religious scholar, but I know the Bible says that Jesus is the Way, the Truth and the Life.

“For God so loved the world that He gave His only begotten Son, that whoever believes in Him should not perish but have everlasting life. For God did not send His Son into the world to condemn the world, but that the world through Him might be saved.” ~ John 3:16,17

That seems pretty straightforward to me. Simply put, if we believe in God’s Son, Jesus, and accept the forgiveness of our sins that He died to give us, the Bible says we have the promise of eternal life. When we die, God isn’t going to ask us what church we belonged to, He’s going to look into our hearts to see if we truly believed in Him and received His free gift of salvation.

The Bible says we’ve all sinned and fallen short of the glory of God, so without His forgiveness, none of us could ever be “good enough” to get into Heaven. “For by grace you have been saved through faith, and that not of yourselves; it is the gift of God, not of works, lest anyone should boast.” (Ephesians 2:8,9)

I’d like to share the following poem I wrote on an actual conversation I had with an elderly friend of mine several years ago.

He Who Believes
By Eileen Umbehr

I have a friend
who lost her son
in a tragic way
at age twenty-one.

"Do you believe in Heaven?"
I asked her one day.
She shook her head no,
then turned away.

"What do you believe happens
when we die?”
"I think that's the end,"
was her reply.

I said, "When I lost my mother
seven years ago this May,
It brought me great comfort
to know I'd see her one day."

"If you believe that is true,
you surprise me," she said.
"It just makes people feel better
to think that in their head."

“Well, I know the Bible says
that he who believes
Jesus is the Son of God
will live eternally.”

So my friend and I
will agree to disagree,
but I'll keep on praying,
that one day, she'll believe.

Then maybe someday,
we'll meet again in the sky
where we'll continue our visits
in the sweet by and by.
**********
“Jesus said to her, I am the resurrection and the life. He who believes in Me will live, even though he dies; and whoever lives and believes in Me will never die. Do you believe this?”