"And now abide faith, hope, love, these three; but the greatest of these is love.”
~ I Corinthians 13:13
My mother and father-in-law, Jim and Jean Umbehr, were married on the twelfth day of the twelfth month in 1953. Tomorrow they will be celebrating their 50th anniversary. What an amazing milestone. Congratulations, Mom and Dad!

I wonder what their parents thought when they decided to get married. Jim didn't have a job and Jean was still in nursing school. It reminds me of the words to Tanya Tucker's song titled, Two Sparrows in a Hurricane.

Like two sparrows in a hurricane
Trying to find their way
With a head full of dreams
And faith that can move anything
They've heard it's all uphill
But all they know is how they feel
The world says they'll never make it, love says they will.

Jim and Jean have had a very adventurous life together. They had three children - Kihm, Keen and Kevin (that was an adventure right there!). But when their children were small, the oil company Jim worked for transferred him to Africa. They lived in Nigeria and Angola, Africa. Keen said when they played outside, the neighborhood kids used to rub their arms to see if the white would rub off their skin.

Later, the Umbehr family moved to Singapore where they lived for about eight years. What a great experience - growing up overseas. Of course, Keen and I met while we were both attending Singapore American School so our parents watched our love blossom from high school sweethearts to husband and wife. Who would have thunk it?

During our high school years, Keen's parents were always good sports about letting large groups of kids come over to their house. They had this huge, rectangular shaped living room. I remember one time they moved all of their furniture to the edges of the room so we could have a square dance.

The first time Keen and I really met was at the pool where his family lived. A whole group of kids were playing "Marco Polo" until there was no one left in the pool but the two of us. I had a huge crush on Keen, but I didn't think he knew I existed. Needless to say, I was one very happy teenage camper that day.

One time Keen and I got into trouble with both of our parents because we stayed out too late. If we had only known how much turmoil we were going to cause! I remember Keen's parents made him call my mom and apologize for keeping me out so late. My mom was pretty impressed by that, and soon all was forgiven.

Based on the tears shed at our wedding by Keen’s side of the family, I’m not sure his folks were quite ready for us to get married as young as we did (we were both 19). My folks, on the other hand, were grinning from ear to ear. Keen's mom once told me that time seemed to fly when her kids were growing up. Then one day she woke up and said, "Where did everybody go? It was just starting to get fun."

Keen was very blessed with great parents who loved, nurtured and supported him through every phase of his life and I am eternally grateful to them for blessing me with such a wonderful life partner.

Every single choice we make,
Every breath we get to take
Is all because two people fell in love

Right now at a picnic shelter down by Canyon Creek
You'll find potato salad, hot dogs and baked beans
The whole Wilson family's lined up filling their paper plates
They drove or flown in here from 15 different states
Stanley Wilson said that sixty years ago he knew
That Miss Sama Tucker was the one
Now five generations get together every June
And all because two people fell in love

Wishing you many more years of love and happiness, Mom and Dad. 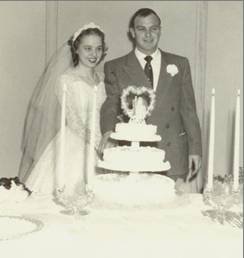 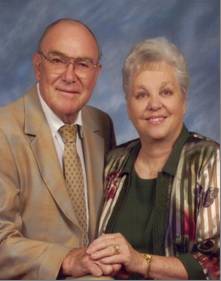 Posted by Eileen Umbehr at 9:36 AM