This Saturday, November 8th, my husband, Keen will be celebrating his 45th birthday. After I went shopping for just the perfect Hallmark card, I got home and found that I had already purchased the exact same card several months earlier. I have a file cabinet where I store cards that I buy in advance and I had forgotten that I already bought him that very card. Anyway, I loved the message:

“When I stop and think about all the small miracles it took to put you on this planet, to have our paths cross, and to grace our life together with so much light and love…I’m just so grateful…and so, so glad you were born. Happy birthday, my husband, my soul mate.”

It’s true that it took several small miracles (and a few large ones) for Keen and I to meet. I had just turned 15 and was living in a small town in Wisconsin when my father decided to accept an overseas transfer to Singapore with the 3M Company. Keen, not yet 15, was already living in Singapore. Ironically, I fought the move more than any of my other siblings. They saw it as an adventure, but I threw quite a little fit about the whole thing. I didn’t want to leave my friends. And to make matters worse, I had just learned that I made the cheerleading squad, which was a VERY big deal for a high school sophomore, don’t you know! But God knew what He was doing (as usual), because if we hadn’t moved to Singapore, I never would have met the man of my dreams; the man who would one day become my husband and the father of our four children.

After we met and fell in love, life threw us a curve ball. My family moved back to the States (Minnesota, this time), while Keen’s family remained in Singapore. So for the next two years, Keen and I were half a world apart from each other. It was too expensive to call, so we wrote letters….lots of letters. Thankfully, he saved all of his (from me) and I saved all of mine (from him).

One of my sisters later told me that my mom worried that I was in for a big disappointment if I thought Keen was going to wait for me. But wait he did. Although his buddies made several attempts to get him to go on double dates with them, he flatly refused. In fact, when he had to vote for a homecoming queen candidate, he voted for Eileen Van Kirk – even though I no longer attended Singapore American School. Now that’s loyalty!

Keen has been a wonderful husband to me. Back in 1994 when I got my commercial drivers license so that I could drive the trash truck, he told me how happy he was to be able to spend time with me. “The idea of going to work with my wife is so intriguing…..I mean, we got married because we love each other. All we’ve ever wanted was just to be together – now we can.” When we were driving home from St. Louis after picking up our new trash truck he said, “I’m so proud to be able to show the world that my wife is multi-talented. She can be a Memphis Belle when she wants, she’s an accountant, a lawyer, a mother, a housewife and now, she’s a truck driver.” (I wasn’t as thrilled as he was with my new role, so I fired myself a year later.)

Keen has always been and still is a wonderful father. He relates so well to each of our boys. When they were small, I took care of their emotional and physical needs and Keen took care of their need to wrestle, fish, camp, and play catch. During the summers he would take them down to Low Water Bridge so they could swing on the rope and drop into the water. Oh, and I can’t forget the annual Umbehr tomato fight.
At night he would sing them a song, but not your typical lullaby, mind you. He would sing something like “Chantilly Lace.” Then he made up a song from a McDonald’s commercial: “Nobody, can do it, like my buddies can. Nobody, can do it like my buddies can. They’re the reason, I do it – nobody, can do it, like my buddies can.”

One time Keen was so exhausted after work that he went to bed around 6:00 and our 4-year-old son, Josh stood beside his dad and sang to him this time. Here’s an excerpt from my journal:
March 25, 1985

When Keen wasn’t working, he was giving 110% to me and the boys. All four of them have said that it’s their goal to become the kind of father that their dad was. (Jared already has!)

Keen is not only a wonderful father and husband, but a remarkable human being. Back in 1998, when we found out that he just lost his fourth attempt at becoming county commissioner, I was so upset. “How many times do you have to run before they’ll elect you?” I asked him. “When will it be your time?” He was discouraged, too, of course, but his response blew me away. “I never ask when,” he said quietly. “I just say…whenever.”

Keen has a dream of becoming governor one day. (You heard it here first.) Maybe he’ll be like Abraham Lincoln who refused to give up even though he lost election after election.

Come to think of it, you didn’t hear it here first. In an article written by Matt Moline in the January 6, 2003 edition of The Topeka Capital-Journal, the headlines read, “Former trashman has high political goals.” Keen was quoted as saying, “I know it seems like an outrageous thing, to go from trashman to be governor. But I'll just say I have this affinity to be governor of this state one day…..Any 5-year-old can say they want to be president, so what I'm saying may sound idealistic, and maybe it is. But I guess people who lose their ideals, they also lose their desire."
Sometimes Keen seems to have the wisdom of Solomon. Over the years, I’ve recorded things he’s said that just sound like a quote. Here are a few of them.

“Life is like a wave; you can either stand there and let it beat you up or you can become a surfer. Learn to ride the waves of life and go with it, because it never stops, it never quits and it never gets any easier.” ~ New Years Eve, 1991

“Let the winds blow stronger, let the skies grow darker, because God is going to give us the victory.” ~June, 1994

“Standing up for what’s right is scary business. And I’ll tell you one thing, there’s not much competition for it either.” ~ June, 1994

Here’s a poem I wrote for Keen for our twentieth anniversary five years ago.

Lord, You’re my best friend in the whole wide world,
forever faithful and true;
and You blessed me with someone right here on earth,
someone who’s just like You.

He’s always there when I need him,
he never lets me down;
and whenever I’m feeling sad or blue,
He turns to a smile, my frown.

You brought us together in Singapore,
when we were only fifteen;
and ever since the day we met,
he has made me feel like a queen.

He never chooses to point out my faults,
he acts as if I don’t have any;
and even though I appreciate this,
we both know that I have many.

In twenty years of marital bliss,
not one unkind word has he said;
I only wish that I could say the same,
but You know I’m the hothead.

But just like You, he’s patient with me,
even when I get stressed;
he helps me stay calm in the midst of the storm,
and says things will work out for the best.

He tells me he’s the lucky one,
to have me as his wife;
but I am the one who is truly blessed,
to have him in my life.

Happy birthday, my husband, my soul mate. I love you. 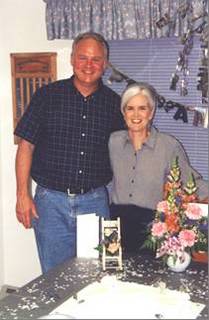 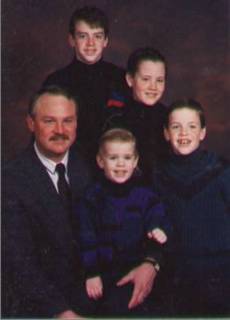 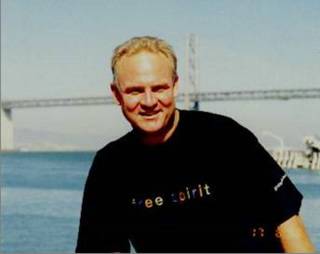 Posted by Eileen Umbehr at 8:45 AM