“Children's children are the crown of old men….”
~ Proverbs 17:6 (NKJV)
Keen and I have two grandsons who are both celebrating their birthdays this week. Our youngest grandson, Gabriel Michael, had his first birthday on September 17th and his big brother, Asher William, will celebrate his 4th birthday on September 21st. They already had their joint birthday party last Sunday. When my daughter-in-law Erin asked Asher what his favorite gift was, he thought for a minute and said, “The birthday hats!” We should all be so easy to please!

A New Kind of Wonder
By Eileen Umbehr

When Asher was born on September 21st,
I was so excited, I thought I would burst.

My daughter-in-law invited me to be in the room,
when their bundle of love decided to bloom.

Then I watched my firstborn son cut the cord asunder,
while I peered into the face of this New Kind of Wonder.

I saw his cute dimples; I heard his first cry.
Yes, I witnessed a miracle, right before my eyes.

He’s not mine, but then he is, because he’s a part of me –
this newest little branch on our family tree.

You just cannot imagine, the joy that he brings –
that is, unless you have your own grand-offspring!

Whenever I haven’t seen him in a while,
he puts his little hands on my cheeks and gives me a big smile. 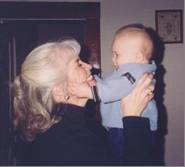 Asher’s name means blessed, lucky and happy,
And that’s just what he’s made his grandma and grandpappy.

So whenever I’m feeling a little bit under,
I just look into the face of this New Kind of Wonder.

****************************
Jared, Erin and Asher lived in Manhattan until Asher was two years old, so we really enjoyed having them so close by. Then, after September 11th, Jared decided to join the Navy, and they moved to Ohio so Erin could live with her parents and enroll in nursing school. We sure do miss them.

Here’s another poem I wrote shortly after they moved to Ohio two years ago.

Most of all
By Eileen Umbehr

I miss seeing your smile
and hearing your laugh
I miss singing you to sleep
and holding you on my lap.

The high chair sits empty,
the toy box is untouched;
And I guess we won’t be needing,
these little forks, spoons and cups.

Here are a few extra diapers,
And a can of Pediasure,
Some tiny little mittens
that won’t fit anyone ‘round here.

Now there’s no one to sing,
the “Asher cheer” to,
Because there’s nobody else
half as special as you.

Everywhere I look
I’m reminded of you,
the legos in the closet
and seeing Blue’s Clues.

I miss your mommy
And your daddy, too
But most of all, Asher,
I miss you.

About that nursing degree…..well, life has a funny way of throwing you curve balls and this little curve ball weighed 6 lbs. 4 oz. and is named Gabriel Michael. But we wouldn’t trade him for anything (although his Daddy says he’s not quite as “adorable” at 2:00 in the morning). So Erin took a year off to nurse and nurture their new little son and now, a year later, she is ready to start back to nursing school. Erin is strong and determined, so I have no doubt that she will achieve all of her goals. (She’s also very intelligent – that always helps!)

I remember the night Gabriel was born. I was on the phone with Jared and he was explaining that there were some complications and the doctors were considering doing a C-section. All of a sudden Jared said, “Mom, I’ve gotta go! Erin’s having the baby!” He called about an hour later to let us know that Erin had another healthy baby boy and she was able to deliver him naturally. Then Jared said, “Do you want to hear him, Mom?” So he put the phone by his newborn son and I heard one of Gabe’s very first cries. Needless to say, that started a chain reaction and soon Grandma was crying, too. But it was the next best thing to being there.

Asher and Gabe have turned out to be the best of buddies. Gabe’s a tough little guy who already likes to romp on the floor with his brother. When Erin moved Gabe into Asher’s room recently Asher was just thrilled. I’m so glad they have each other for a built in playmate.

Before I close, I’d like to share one more poem that a woman named Deb Miller wrote for her grandchildren.

Loving a Grandchild!
By Deb Miller

Loving a grandchild is
like none other.
It's not quite the same as
being a mother.

You love your children,
each one is unique,
But the love of a grandchild,
will sweep you off your feet.

They look up at you,
with their cute little grins,
touching your heart deep within.

They're sweet little angels
sent from up above,
and they warm your heart
with unconditional love. 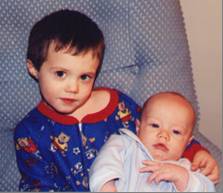 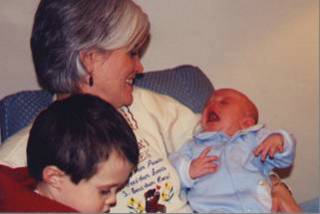 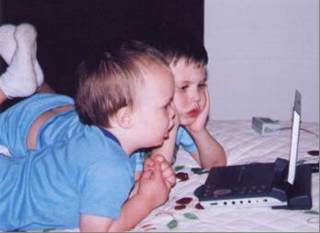 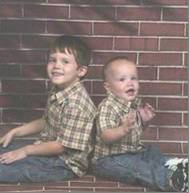 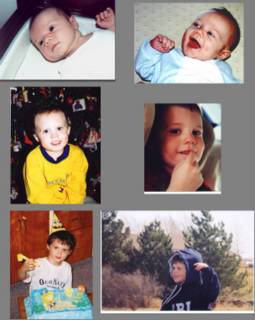 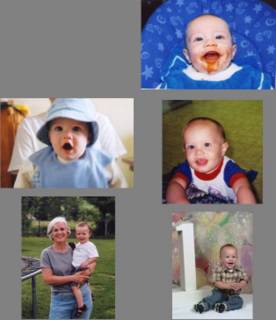 Posted by Eileen Umbehr at 1:19 AM