I hardly know where to begin. Tears fill my eyes as I sit down to share some remembrances from the very special weekend my sisters and I spent on Whidbey Island while attending the Celebration of Life ceremony for our sister, Patricia.

From the moment we landed in Seattle, we were treated like royalty by Nikki and Patricia’s friends and family. Nikki’s brother John, and two friends, Nola and Laura, picked us up at the airport. This alone was no small task, as it took three hours in rush-hour traffic (and a ride on the ferry) to make it back to the island.

Nikki made arrangements for us to stay in a wonderful little bungalow right on the beach with a breathtaking view of the mountains. A bald eagle perched on the end of the dock greeted Peggy & Connie, who arrived first. Nikki & Laura also placed a beautiful bouquet of flowers in our room, along with some snacks and beverages.

That evening, about 40-50 people gathered at a palatial lodge where another friend, Terry, had prepared an authentic Italian meal with all the trimmings. Terry generously donated the use of the lodge, which she had bid on earlier at a fund-raising auction. (She had intended to use it for her 50th birthday celebration.)

As I walked through the door of the lodge, I was overwhelmed by the love I felt in the room. Two of the very first people to greet us were Shawn and her two-year-old daughter, Lucy, who shared a home with Nikki & Patricia. I felt an immediate bond with both of them since I recalled hearing many “Lucy stories” from Patricia. Now it was Shawn’s turn to share “Patricia stories” with us. Shawn said that when Patricia came home Lucy would scream “PISHA!” and run full force into her arms for a big hug. When Shawn tried to explain that Pisha started a new life, Lucy decided they should sing Happy Birthday to Pisha.

Next I was introduced to Bev & Carolyn, who were the two friends that were swimming with Patricia and carried her to the beach after something went terribly wrong. We hugged and cried and talked as though we had known each other our entire lives. I met so many beautiful people that night and throughout the weekend, and I will cherish each and every one of them forever in my heart.

The Celebration of Life service was held the next day at Freeland Hall. As our sister Peggy wrote to our siblings who were unable to attend: “It is difficult to convey to you in words the intensity of the experience and the love and the respect shown for Patricia. It was all quite remarkable.”

The weather that day was absolutely perfect. Nikki even saw a bald eagle circling right above the hall when she arrived to set everything up. There were decorations and bouquets of flowers everywhere, and the walls and tables were filled with pictures of Patricia, along with pictures taken by Patricia. There were also balloons and an incredible array of desserts in honor of Patricia, who loved both.

Whenever I expressed my gratitude to one of the many people working on the preparations, their standard reply was: “Nikki organized everything – we’re just doing what she tells us to do.” I still don’t know how Nikki planned such an elaborate tribute to Patricia in the midst of her own grief, but I’m sure glad she did.

Approximately 200 people attended the memorial service, which began with two of Patricia’s friends, Diana & Sylvia, singing a beautiful song titled, “White Light,” which Diana wrote for Patricia when she was battling breast cancer. The first verse of the song is: “Angels are smiling (3x) - Blessing this room, filling this room, with white light.”

What followed was a series of tributes and accolades from several of Patricia’s friends, family and colleagues. In between the times of sharing we watched two slide shows. One was a collection of Patricia’s nature photographs shown to a magical song titled “Breaths,” by Sweet Honey in the Rock. The other was a DVD Diana created for Patricia, which included some gripping video footage of Patricia playing on the beach and swimming in the ocean just fifteen minutes before she was stricken. At the very end there was a short clip of Patricia laughing while she playfully dodged the camera like a child. It was both heart warming and heart wrenching.

A friend of Patricia's named Linda Ferreira, stood up and read the following poem, (author unknown).

Next, Linda read her own personal rendition of the above poem, which she wrote for Patricia. With her permission, I’d like to share the following excerpt with you:

I’m here with you in Lucy’s park – just look, you’ll see me swing
Gently in the morning breeze, the gift that sunrise brings
Look for me at sunset, I’ll remind you to have hope
These painful days will pass; you’ll see, together you will cope.

I’m sitting in the sunshine; I’m meditating in the rain
Close your eyes and pray my friends, it will help you ease your pain
At night time look toward heaven – see star light shine your way
I’m sitting with my mother – believe me, we’re okay.

At the end of the service, Diana and Sylvia led the group in a song titled, “Circle of Friends.” Everyone in the room reached across the isles and joined hands together as we sang and swayed slowly to the music:

The following day my sisters and I had breakfast with Nikki, Roxy and Jan (two friends who also attended the funeral service in Minnesota). We cried and laughed as we exchanged more Patricia stories. Then Roxy shared something that I will never forget. She said that Patricia left a message on their answering machine the Saturday before she left for Mexico saying that she really wanted to see Roxy and Laura before her trip. After Roxy learned of Patricia’s passing, she deeply regretted not being able to connect with her as they had hoped. Then she looked at each of us and said that she could see Patricia in our faces and hear her in our laughs, and because of that, she felt like she did get to see Patricia one more time after all.

I know this is a little long, but I just can’t close without sharing the most memorable event of all. The evening before we left, the four Van Kirk sisters gathered privately with Nikki, Bev and Carolyn, so they could share additional information about Patricia’s last day on earth and answer any questions we might have. Afterwards, we all held hands in a circle on the beach and, with tears streaming down our faces, we sang the chorus from “On Eagle’s Wings” by Michael Joncas:

And He will raise you up on eagle’s wings,
Bear you on the breath of dawn,
Make you to shine like the sun,
And hold you in the palm of His hand.

Just then, as if on a heavenly cue, a giant bald eagle flew across the water right in front of us and swooped down to retrieve some food that the resort owner had placed on the shoreline. We all watched in utter amazement as we inhaled the wonder of it all.

Looking back on our weekend spent remembering Patricia with the members of her extended family, the following quote seems especially apropos: “Many people will walk in and out of your life; but only true friends will leave footprints in your heart.” Yes, we lost our sister, and because of that, we will never be the same. But now I can honestly say that we have gained many, many true friends who indeed left their “footprints on our hearts.”

My sister Mary summed it up best with something she said when Laura dropped us off at the airport. “Please tell everyone for us," she said, "We came here out of love for Patricia, but we’re leaving with love for you.” 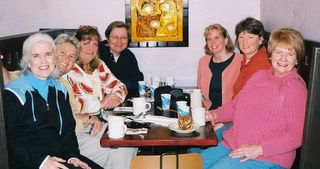